Well, it was that time of year again, where our heritage turkey hens get broody. Tasha, our star mommy, got broody in a little nook in a pile of “stuff” in our barn. So, I decided to move her and the eggs into our brooder barn (formerly the summer kitchen), with a nice nest, and private, but after a couple of days, she wouldn’t sit on them. So, back went the eggs into the nook nest, and her free, and lo and behold, she started sitting on them again. Then, the strategy became, let her hatch them out, and hopefully we can gather her and the chicks and put them in the brooder barn.

Well, 28 days or so later, sure enough, little turkey chicks (I call them “turklets”, like “chicklets” 😉 ) started showing. We wanted to let her finish hatching, but didn’t want to wait long because of our cats potentially getting them. But then, we came home one day, and things were in some chaos, so something had happened, and so we tried to round up the chicks and her, and get them in the brooder barn. It went ok, although I believe we lost one in the process. Still, she had been sitting on quite a few eggs, and we were able to get her and five live turklets inside.

These chicks have always seemed fragile over the years, and so we had no idea what to expect. In fact, another turkey hen or ours, Olivia, recently started sitting, and they started to hatch out, all three or four were basically out of the shell, but dead when I found them. Always so sad. But, by God’s graces, Tasha’s grew, and continued to.

Here they are fairly young, maybe a couple of weeks after hatching: 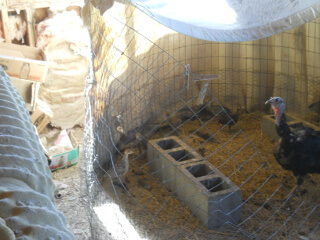 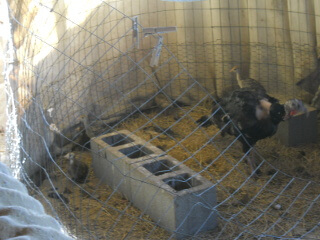 And then perched with mommy for the night. She’s very protective, so any resupplying of water and food had to be done at night, or she might go crazy and try to fly out the window, which she has done 🙂 : 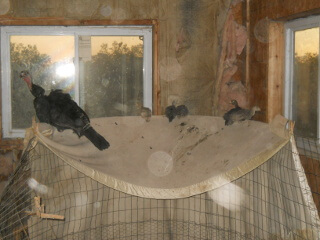 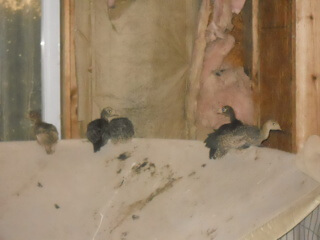 Last year, after shortly letting out Tasha and her two turkets, something happened one night in the barn, and then next morning, one had disappeared, and the other was terminally injured, so we lost both of them. They weren’t tiny when we let them out, but I wondered if perhaps that was part of the cause of their loss. And so, this year, I wanted to keep them in the brooder barn longer.

And here is their video, from when they were younger, to the perch night, to freedom day, and a little beyond! (I do mention these are the only ones she hatched out, but that wasn’t correct, as noted above.)

And finally here they are recently hanging out up in the tree: 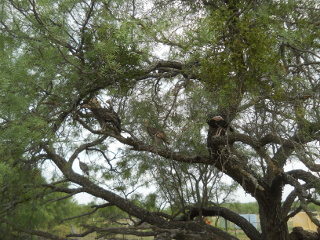 We are grateful to the Lord for these new provisions, and we pray they continue in health, in accordance with His perfectly wise and good will!

Song – The Armor of God

After putting together a little song to help remember the names of God, called Jehovah is His Name!, I had wanted to do something with the armor of God, which over the last few years has become more of a focus in Sue and my spiritual walks.

Here is the Scripture text I used:

10 Finally, my brethren, be strong in the Lord, and in the power of his might.

11 Put on the whole armour of God, that ye may be able to stand against the wiles of the devil.

12 For we wrestle not against flesh and blood, but against principalities, against powers, against the rulers of the darkness of this world, against spiritual wickedness in high places.

13 Wherefore take unto you the whole armour of God, that ye may be able to withstand in the evil day, and having done all, to stand.

14 Stand therefore, having your loins girt about with truth, and having on the breastplate of righteousness;

15 And your feet shod with the preparation of the gospel of peace;

16 Above all, taking the shield of faith, wherewith ye shall be able to quench all the fiery darts of the wicked.

17 And take the helmet of salvation, and the sword of the Spirit, which is the word of God:

I had a tune I had already written called “I Hate Cockleburs”, in honor of the time spent pulling them out by hand in our 11-acre north field, and since, continuing to sweep that field, clearing them twice yearly before they seed out. The “lyrics” went like this:

(On a doctrinal aside, I don’t “hate” them as I hope I hate sin. And actually, I recognize weeds and the like as a reminder of God’s hatred of sin when He cursed the ground [see Gen 3:17-19] and His perfect wisdom and goodness in bringing them forth. And so, I use the word “hate” as something of typical usage, and because it fit with the tune’s meter. 🙂 But, to return…)

The cockleburs were indeed a pain. But, the effort in pulling them paid off, and there are very few now every year. And each time I try to remember to ask God to weed the gardens of our hearts, so there will be good soil, and no thorns or weeds. See Matt 13:1-23

Also, the tune is in a minor key, and I thought that would work well with a song about armor and battles.

And so, over a fairly long period of time, the Lord did grant I finally finish working out the lyrics with the cocklebur melody, and adding the harmony parts. With this one, as with when I did Moses’ Song of the Sea from Exodus 15, I attempted to stay as close to the actual Scripture verses themselves as possible, trying to use only minimal artistic license to make it all work out. 🙂

This is the sheet music: 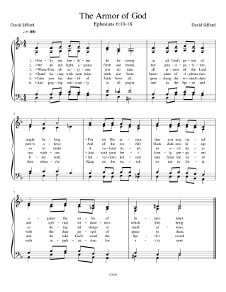 And an instrumental audio version:

The Armor of God – Instrumental (MP3)

Here, Sue and I sing it with the accompaniment:

May God grant us His armor daily so we might resist the devil, and his and the world’s distractions and temptations, and we thank the Lord for His armor and His blessed word, the Bible!