If you’ve read any of the David’s Digest blog posts, you would see many references to Puritan writings, including Thomas Manton, the latest from Thomas Brooks, etc. I have put these out because I have believed they are important topics for those who take the name of Christ to be exposed to.

The reason I have known about them myself is because I have read the printed volumes from which they come, and the Lord has very much blessed me through them.

There are many things from them I would really like to put out on the blog, but then I would be often just posting whole sermons and books. 🙂

But, I thought that, given the easy availability of digital media, and the convenience and preference for some to be able to listen while doing other things, I would just start reading these publications while recording them, and then post them on our website.

And so, I have begun to do just these things, which are now available on any page of our blog on the right side under the “Soul Info” section (or at the bottom on any mobile device) and the link Audio Readings of Christian Writings.

I’ve currently started Thomas Manton’s Commentaries on James and Jude, Thomas Brooks’ “Precious Remedies Against Satan’s Devices” (from which I did my last Digest blog posts), and Thomas Watson’s “10 Commandments” book. If you’re interested, please feel free to check in on the page for the latest readings as we plan to continue to put more out as they get done, as the Lord wills.

It is our prayer that God bless these to someone, bring them to Him in salvation, and/or grow them in truth and holiness. May He grant the hearers ears to hear and by His graces apply His word to the hearts of the listeners, and may the name of the Lord be glorified and magnified!

Those who follow our blog might notice the difference in the title. Usually for these types of blog posts about God providing perpetuation provisions, we include that exactly in the title. However, this situation sadly ended up a little different than normal…

Tasha, one of the offspring from the heritage breed Black Turkey that showed up on our homestead one day, and the Tom we got as her mate, got broody, sitting outside somewhere, and I was thankfully able to grab her and the eggs and get her into what has become our brooder building (formerly known as our summer kitchen…it’s just worked out that way 🙂 ).

And in due time, she hatched out 4 turkey chicks! (I call them “turklets”, like “chicklets” 😉 )

But, through experience, we have come to understand that these turklets are quite fragile, or they get eaten by a snake (I’ve done some filling of the wall gaps in the brooder building to try to help with that, and we put a lantern in there at night so the mommy can see and perhaps fight off the snake), and for any of them to make it seems something extraordinary. 2 indeed did die, but 2 continued to make it.

Here’s one early on. You can see how tiny they are: 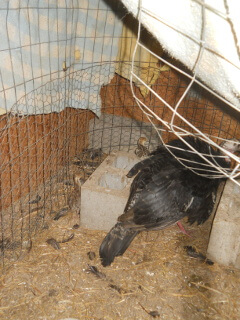 And then both a little older with their mommy: 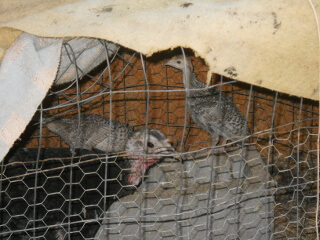 When they got to be about the size we usually let them out, it was time to do so. And we did, and they began their adventure in God’s creation, where they should be. And at night, we’d make sure they were in the barn for hopeful safety.

But that has sadly not always turned out to be the case (see the loss of Gigi our goose). A few days later, I went into the barn in the morning to let all the animals out, and I discovered one of the turklets was on the ground with its little head weaving back and forth across its back, which is a sign of something severely wrong; and the other turklet was nowhere to be found. I rushed the injured one into the brooder building, and tried to care for it as best I could, but indeed whatever happened to it was serious, and it died I believe by the next day. And we never found the body of the other turklet, although there was the smell of death near the front walk-in door (that’s real life on a farm), but after searching extensively, still never found anything.

We still don’t know what happened. But it was a shock, and very sad.

But here is the important point:

The God of all creation owns it all as such, and it is His for Him to disperse and dispense with as He wills. I would encouurage you to read all of Job 1, which some would say is the first book of the Bible actually written. Satan asks God’s permission to tempt Job (notice even the devil must take leave of God before acting), the Lord grants it with limitations, and almost everything Job had was taken from him — his animals, servants, and even his children. Not quite like losing a couple of turkey chicks, but with those much greater losses, what was Job’s response:

21 And said, Naked came I out of my mother’s womb, and naked shall I return thither: the Lord gave, and the Lord hath taken away; blessed be the name of the Lord.

22 In all this Job sinned not, nor charged God foolishly.“

And there you go. He was sad, but submitted to God’s sovereign providences willingly, not murmuring, and even worshipping the Lord in it.

May this be our response to the hand of God in like situations. And may we recognize His mercies in these things too — He could have taken the whole flock but didn’t. And may the Lord grant us a true faith to trust Him in His perfect, wise, good, loving, and sovereign will under all circumstances.

And even though the little turklets aren’t with us anymore, I still wanted to share the 2 little gifts God granted for a while, which, since He is all wise and good, we pray He has graciously granted some good to our souls through the losses of them.

It’s always amazing to me how a little creature can be stuffed into that little egg-chamber (if you’ve ever seen them in there, they’re very scrunched up) and make it’s way out. And then to watch them grow…all these miracles of Providence along the way.

But without anything further, here they are on the day we let them out of the brooder building for the first time: 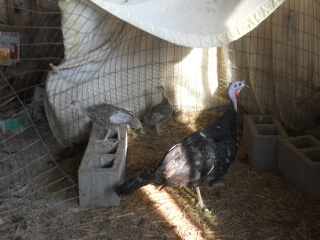 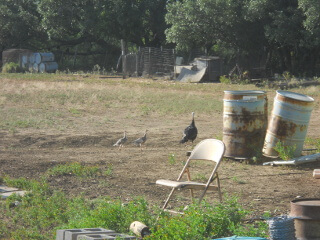 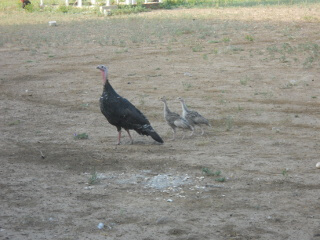 And then here’s their video:

Again, we thank the Lord for His many gifts, and thank Him for His graces and mercies in all things, especially to those He grants for our spiritual benefit, most of all the Lord Jesus Christ and His Holy Spirit, the greatest gifts ever!

It’s been over a year since our last house update, so I thought we’d catch up everyone as to the latest progress…

We took a little break from doing anything on the house, but earlier in the year added some cabinets to our bathroom area. Sue felt best to have something enclosed as things get dusty around here so quickly, being on a farm: 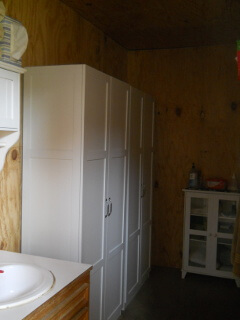 And then recently we finally got the library going as I’ve kind of always wanted. Mostly it was just getting the bookshelves into place, and then we could move the books from the other pre-made shelves into them, and then clear out all kinds of stuff from tubs we brought when we moved here almost 14 years ago!

We had to move out the current portable bookshelves. Here is where they were: 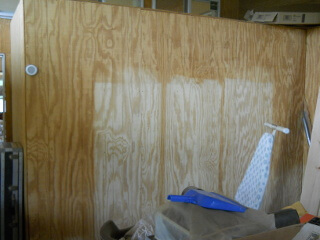 And then it was on to making the new permanent shelves. I kind of got the idea from a bookshelf in a thrift store I saw once.

Here’s the base being built: 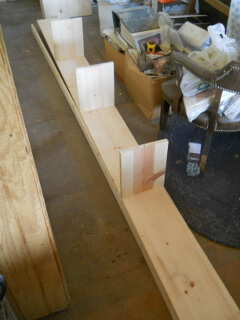 Then the shelves half done: 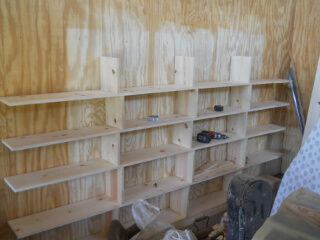 Foreman William making sure they’re going to be comfortable enough as cat cubbies! 😉 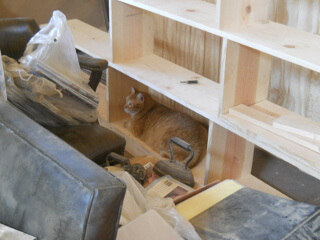 And here are the bookshelves done height-wise with the sides attached: 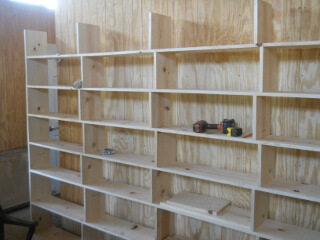 I did have to use a ratchet strap to pull things straight a bit: 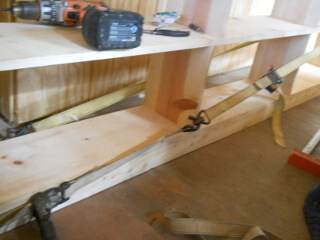 Since the ends attached from the outside, I added extra braces under each shelf end: 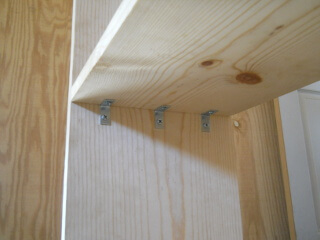 And here are the shelves completed: 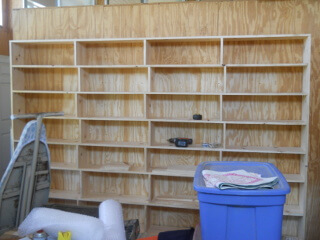 And attached to the floor: 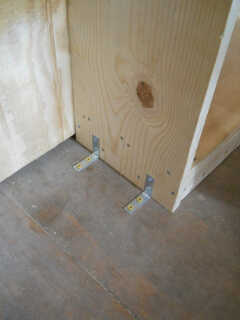 And the wall on top: 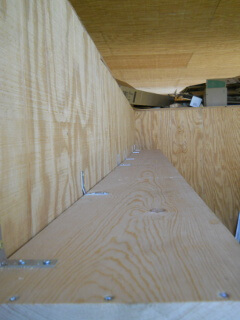 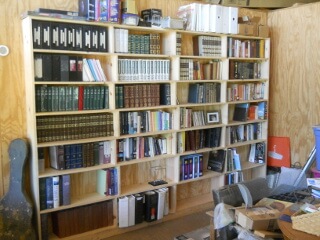 And then on to the other wall: 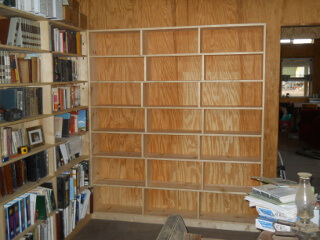 With the two bookshelves in place, here is what the library looked like before starting: 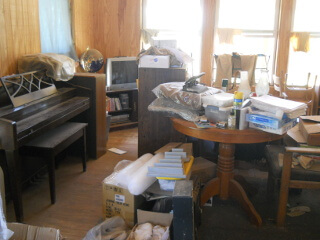 And then, needless to say, we have finally purged a lot of things we believe we would no longer use… 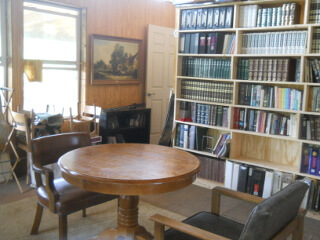 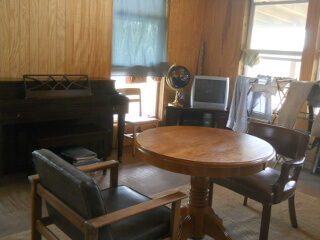 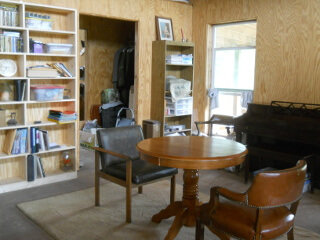 …or stored them in the area above the bathroom/pantry/closet walls, which was part of the purpose of that whole platform: 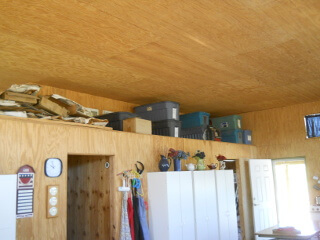 As always, we are thankful to the Lord for granting the resources to do these things, and to the folks who have made all of this possible!

May this house be a house of worship to and learning about God at all times!