It’s been a very long time since we did our update about our solar setup, mostly because nothing has really changed other than having to replace equipment along the way and modifying some configurations, but recently things have changed regarding it, and so we thought we’d do a little update about that…

There was a sale on solar panels we were made aware of, nice big 36V/8A ones. I decided to purchase one to be able to add to our current 3-panel system on the solar trailer. Well, the nice gents from here who went and got the panels showed up with 2 more panels…said they were ours and there were no refunds. 🙂 Well, how very gracious and giving they were to do that for us!

And so, now we had 3 panels, and I needed to figure out what to do with them…

First, we pulled the older panels so someone else here could use them. Here is the solar trailer with the 3 smaller panels removed: 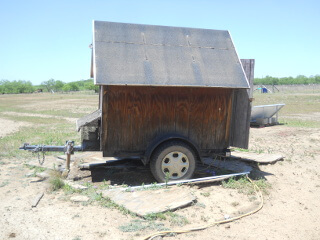 And here is the platform I made a long time ago so I could turn the trailer easier so it would face the sun throughout the day; it’s pretty torn up now. For probably 12 1/2 years I turned that thing nearly every day…it was going to be nice to not have to do that anymore! 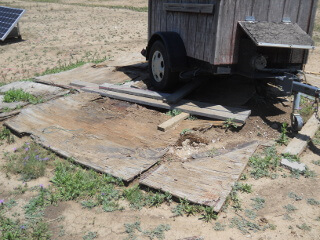 I really wanted to be able to continue to turn them though to face them into the sun, especially at day end when we are using our computers and the sun was going away, and for cloudier days. And so the Lord granted I come up with the idea to attach them to palettes, and here’s how I did it… 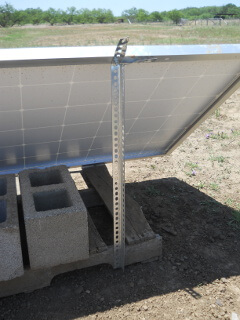 And in front, I used small angle brackets: 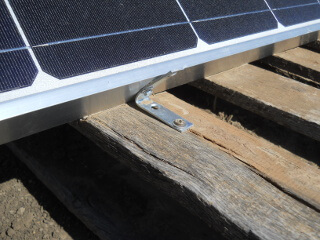 All in all, it thankfully ended up being pretty solid, and they turn nicely! And now Sue can spin them too if necessary, which was a problem before with the solar trailer.

But, here we get high winds with storms, or the occasional dust devil that rolls through, so I packed the backside of the palette with cinder blocks, which has thankfully worked well so far, even in severe-level storm winds: 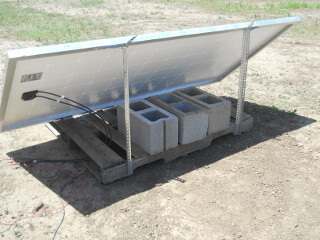 And here is how we have them set today, facing east, south and west (right to left). Currently during normally sunny days, I’m only turning the right one, which is apparently doing most of the work as I decided to stack the charge controllers. I originally had a 150V/50A controller, to which I hooked up all 3 panels in series, not really understanding what I was doing. Well, if you know about these things, I was potentially going to see output of 75-90A, and sure enough, I fried it. And so, with a little better knowledge, we bought a 30A and 60A controller and run 2 in series to the 60A and the other panel to the 30A: 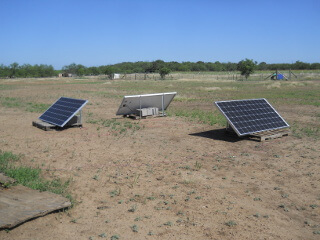 Some years ago when our batteries went bad and we needed new ones, I decide to down-grade the number of battery banks we had, as I just felt there were too many banks (10) for the input we were getting. Well, now with 6 banks, and all the new input, the batteries seem to be working better than they ever have! The Lord has also graciously granted we be going on just over 6 years on these batteries, which typically have an expected life of 5, and we are very thankful, as they are very expensive.

In the end, we look at solar power and electricity as intermediate steps of becoming sustaining on our homestead, but we thank God for these provisions, and thanks again to the folks who made it possible!

Hogs, Hogs on the Range

Currently, our only pig pen area is the place set up with the farrowing shed. One day if the Lord wills, we hope to have pigs as part of an animal rotation scheme. But until then, I thought it might be beneficial to try to allow the pigs in the farrowing area to semi-free range (allow them out of the pen but still keep them controlled) where there was grass and other eatables available. This hopefully would also help us cut back on the store-bought feed. Michael had done this with his pigs by surrounding a forage area with electric fence driven by solar power, and so I thought I’d go the same route.

For us, this involved pounding rebar stakes into the ground every 12 or so feet apart, pounding metal T-posts at the corners, attaching the proper plastic electric fence wire insulators for rebar and T-posts, and then running the electric wire. Here is a picture of the fence: 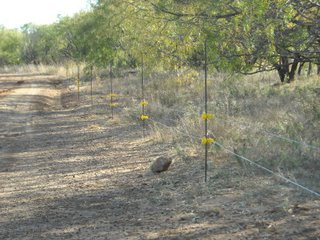 And here is a reverse pictured of the same area: 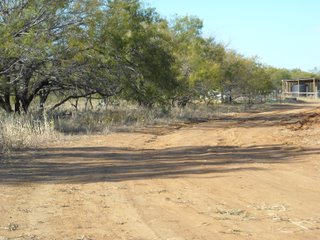 But once the wire was run, it was time to hook up the solar powered electric fence power source. Part of wiring it up was driving into the ground a 6′ galvanized rod for grounding: 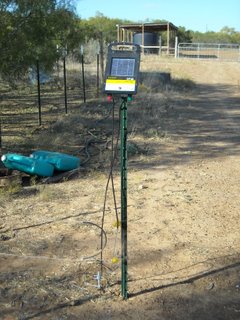 Oh Give Me a Home

In considering the distance between the ground and each of the fence wires, I set the plastic wire holders attached to the rebar about one middle finger to thumb hand span above the ground and then then same span above that for the second wire. Well, once we turned the system on and let the pigs out, apparently not only did we agitate them too excitedly for the moment, but the upper wire just said “doorway” to the pigs; and they both proceeded to hurtle between the two wires and off into the field.

Well, after chasing them back into the pen area, and with the obvious fence failure, I was unsure as to how to proceed. However, I decided to try lowering the top wire half the span between it and the lower wire; and also thought that when we would let them out we would try to make sure they weren’t stirred up so much.

That seemed to help. Here they are discovering their new roaming land: 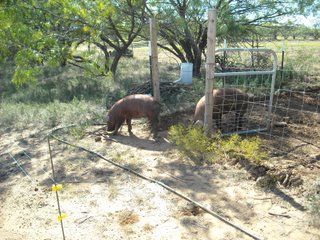 And…well, I guess things are all right now: 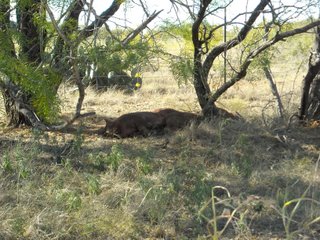 We once again thank the Lord for His provisions and wisdom, insight and help with the processes of building our homestead.

Coming from the city and being used to being able to flip on a light switch and have light appear, and having those things in our camper, we wanted to have electricity available; however, the plan for the land was to never be hooked up to the power grid. Also, at the time, we wanted to be more “agrarian” with things like utilities, and so solar and/or wind seemed promising. Michael found a fellow online who makes portable solar trailers, and so we decided to go that route and purchase one. Here is a picture of ours on the right: 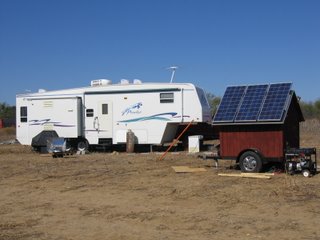 The following might not make a lot of sense to some or most people reading it, and when we got the solar trailers this information didn’t mean much to us either, but I’ll explain the setup briefly: Each panel I believe is 110 watts; and there are 10 battery banks, each bank with 2 6 volt golf cart batteries hooked together in parallel, and each pair run in series to create a 12 volt system, which is the same voltage as our camper’s and is typical of many direct current systems. There is also a charge controller to only allow a maximum of 14 volts into the system via solar so as to not overcharge the system. Lastly, attached to the system are 2 3000 watt continuous inverters, which turn the 12 volt direct current into 110 volt alternating current (AC) (which is what comes out of a normal wall plug). And voila! Electricity!

The setup works pretty well when it’s sunny and we’re not running a freezer, but needs external charging when it’s not sunny or the freezer is being used. This we do with a generator and a battery charger, which can input 60 or more amps into the system when charging (which our battery bank can indeed handle).

We also tried our hand at adding a small wind generator, but it ended up not working very well as it really needed a pretty strong and constant wind to put out any real amount of current.

Now, having electricity is fine and dandy, but in the end this really isn’t a long-term solution, nor does it fit into how we see ourselves living in the future. First, parts will perpetually need to be replaced; and second, we desire the old paths, which includes getting away from things like electricity and doing things in a more truly agrarian way. Light could be daylight, or candle (made from animal fat or bees wax) light; freezing meat could be replaced by cold smoking, or drying; etc. These things we hope to implement and are what we are working toward as we progress here in building our homestead, with God’s help and provisions.

For further insight and discussion into off-grid living, including this area of electricity and food, please see Michael’s “Off-Grid Living Series” located at his Center for Agrarian Homesteading Education site.