Well, after wrapping up at our corporate jobs and packing up all of our stuff with the help of our families back in California, the sojourn began. The date was Sept. 20, 2005. David was driving the moving van, and Susan was following in our Tercel with our pet fishes in the front seat and our pet rabbits in the back seat. We made it to the edge of the California border by the first day, into New Mexico by the second, and into Texas by the third. We decided to stop about 4 hours or so out from our land (as we had driven 8 or so hours already; plus we thought it would be better to arrive in the morning when Michael and the guys could help us unload), and then on into Brownwood where our storage facility was located. The guys helped us unload there, our unloading continued at a storage container on the land, and we spent the first night on the 23rd on the land.

The drive was an interesting experience for both of us in different ways. We had walkie-talkies and head sets with which we communicated the whole way, so that was nice.

From David: My driving of the moving van put me up in the air where the truckers are, and so I got “Keep on Truckin” signs from some as I or they drove by. I also learned some trucker etiquette: after passing a truck and if they flash their headlights, that means you are clear of their front end (because right side mirrors show objects farther than they actually are); however, I didn’t learn about that until later, and so I wondered why they were flashing their lights at me — I thought maybe I might be doing something wrong! 🙂 Also, I noticed as I drove how the big trucks (of which I was one on this trip) sort of have an ebb and flow about them as they are driving, allowing those on the on-ramps to merge nicely without having to slow down, and them maneuvering their trucks in and out of traffic like a ballet. It was quite an experience.

From Susan: It was a very surreal yet exciting feeling pulling out of the driveway that first morning. A real sense of one book, not chapter, being closed and another being opened. With everything we had been learning and the changes God was making in our worldview, I realized life as we knew it was not an option anymore. But there was a real peace that came along with that as well because I had learned as long as you are living your life in obedience to God, He will handle the rest, and He is in control, no matter what happens. With the headset walkie-talkies and pets (our fishes, Barry and Sushi and our rabbits, Buttercup and Derby) with me in our little Toyota, I didn’t feel alone at all. 😉 My mission was to just follow the big yellow moving truck, and I am thankful there wasn’t a decoy that distracted me where I would end up in North Dakota or something, although I did have to really focus on keeping up with Dave a few times. He got in a real groove moving in and out of the big trucks, and I would sometimes lose sight of him. He was up there at the same height with all the truckers, and I felt like this ant in a land of giants. It was quite intimidating at times, but I learned “the highway ballet” fairly quickly and discovered the truckers were very nice and looking out for us, for the most part. God protected us the entire time, and we didn’t have any car or health problems whatsoever, for which we were very thankful. When we passed the “You Are Now Entering Texas” sign I gulped but knew this was where God wanted us. By the way, I can now verify and have seen first hand that the stars at night are not only big, but they ARE bright deep in the heart of Texas. 🙂

And so, there was no looking back! We had arrived at our new home in Texas!

Now that we had the land, we started to consider the fact that we had no place in which to live once we got there. Dave began a series of trips to go and prepare the land for our permanent arrival.

He flew to Texas the first time to search for a good farm truck to have as transportation and to be able to haul anything we might need, including where we were planning on living (see below). (His convertible just didn’t seem very practical for this new lifestyle — we tried to make it work in our minds by envisioning the top down on his convertible and cows in the back seat with the warm summer breeze blowing through their horns, but then we realized the “cleanup” would just be too much. So he had decided to sell his car in California and leave it behind when we moved and that a farm truck towing a cattle trailer behind it might be a better idea.) After much searching by Dave and Michael, they couldn’t find the right truck. Dave’s time was almost up there (he needed to catch his flight back), and on the return drive of the last time they would be able to look, the Lord granted they run across a nice, sturdy Red Ford F250 diesel truck at the right price. And right there on the car lot another redneck was born – YeeeeeeHawwwww!! (That’s Michael to the left side of the truck.) 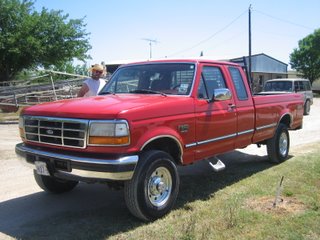 After much thought, we had also decided it would be better to concentrate on getting our homestead up and running; and a house then, should the Lord ever allow us to build one, would be lower priority. So we decided a camper would probably be our best option since we knew we may end up living in it for several years, and it would provide immediate shelter upon our arrival. So Dave took his second trip to Texas, and he became the best friend of most every trailer salesman in the greater Dallas/Fort Worth area looking at all kinds of travel and fifth wheel trailers. He finally narrowed it down to one within our budget that he knew I (Susan) would be able to call home. He did a great job (and almost three years later now it continues to function beautifully and be a wonderful and warm shelter). We were living in a little cottage in California before we moved, so this was very comfortable and spacious to us. It’s like a little apartment. What a huge blessing. Here are a few pictures – welcome to our home!! 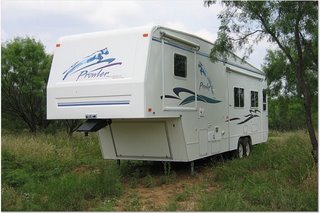 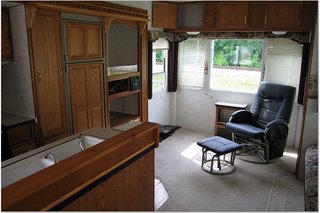 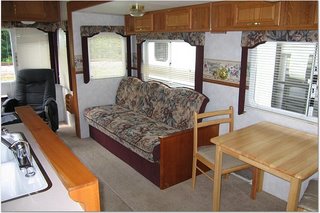 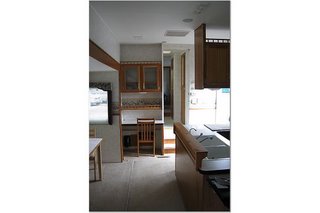 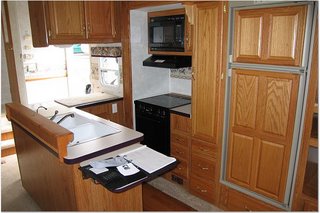 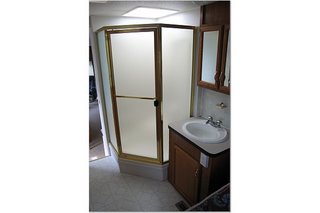 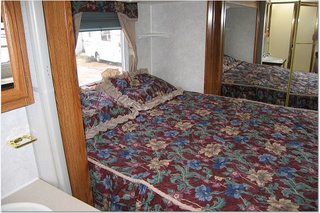 Dave’s third and final preparatory trip was to try to drill a well on the land with a home driller we were able to get. After three weeks of working at it, the guys were still not able to get a working well; and so they decided to stop and look at other possible water sources instead (which we plan to discuss in a future blog post, Lord willing); and Dave headed back to California.

Dave said during the times he was gone (which were the longest we had been apart since we had been married) that he sort of felt like a bridegroom going to prepare a place for his bride, as the Lord Jesus mentioned in John 14:2-3.

Finally, we have learned that we are told in the Bible to be content with food and raiment (1 Tim 6:8), and even the Lord Jesus had no place to lay his head (Matt 8:20) as He was probably the epitome of a sojourner on this earth. And so, we just wanted to say that we are very thankful for the Lord’s provisions of the truck and shelter that He has allowed us.

A Little Piece of Earth 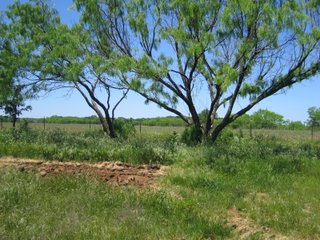 After we made the decision to move to Texas in late 2004, David flew out a couple of times prior to moving to help search for land. We originally were looking for land near Lubbock. After putting in a bid on land there, the Lord closed that door and we believe began to lead Michael in his continued search for land to what’s called West Central Texas. It is in an area remote enough to be truly out in the country but close enough to towns to get supplies as we build our homesteads. Also, it is far away enough from big cities to be far from them, and close enough to them should the need arise to visit them. We placed another bid on a piece of land there; but that door closed as well. The Lord apparently had other plans, and we believe He graciously led Michael to another lot of land for sale, which was beautiful and prosperous looking. It had 3 large fields, large wooded areas that included many oak trees, several creek beds running through it, and 3 tanks (that’s Texas-talk for “ponds”). It seemed this was the place for us; so we placed the bid, and this time it was accepted! This was around April, 2005.

Here are a few more pictures of the land before we moved onto it, wild and untamed: 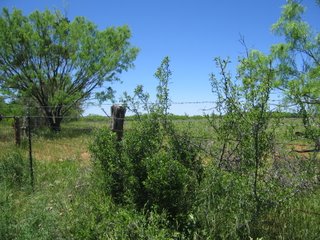 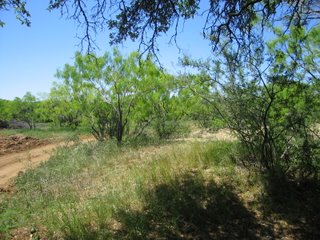 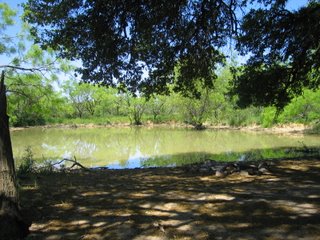 Thus began our adventure in the middle of Texas! We are thankful to the Lord for His provision of this land. 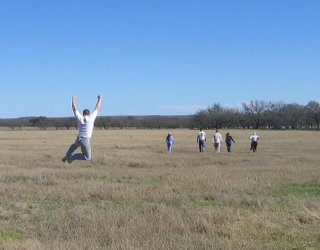 Welcome to our blog! I (David) have really lagged at getting us doing anything in the form of a blog, I guess mostly because I’m not sure why we should. Maybe I’m just lazy; maybe there’s pride there. Probably both, at a minimum. At any rate, here we go. You’ll have to bear with us as we try to catch this up to where we are currently, because there have been around 5 1/2 years of sojourning that the Lord has graciously and mercifully allowed us, and to jump right to where we are now would only give part of the story. So, as the desciption says, we pray the Lord might edify whom He would by this, but ultimately that He glorifies Himself through it.