We had a broody turkey mommy next to a hay manger in the barn goat stall. One day she had a hatchling showing itself with her. But, it looked funny for being a turkey, and that was because, it wasn’t a turkey! A chicken egg got in with her clutch, and she hatched out a little chicken chick!

But, turkey eggs need a week more of sitting than chicken eggs, and so we were worried she might stop sitting on her turkey eggs. Well, sadly, that sort of did happen, although 3 sort of hatched out. We actually tried taking them and all her eggs and putting them under a broody chicken, and 2 more tried to hatch out, but in the end, all 5 turklets didn’t make it. 🙁

However, this little one — I think now it’s a rooster — is still alive today and doing fine!

Here’s another picture of it with its “mommy” in the barn:

And then a video. I had to use a flashlight to try to get light on them:

Even though it didn’t go as we had planned, we are thankful to the Lord for granting this provision of the new chick, our first for 2022!

We are grateful to the Lord for Him granting two more rounds of chick hatchings this 2021!

Here’s group 6. We put 12 eggs under her, and we’re pretty sure she hatched them all out! They’re doing pretty well, although some, especially one, have shown signs of getting sick (standing kind of scrunched up, often with the wings down a little, not very active), so I’ve been giving about an 1/8 to 1/10cc of 660ppm angstrom silver, 2-3 times a day, tapering that over time…most seem basically better, except the one, although it seems improved as well, for which we are thankful: 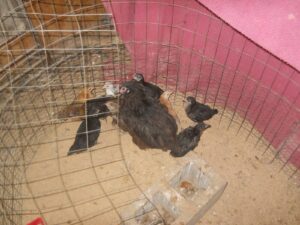 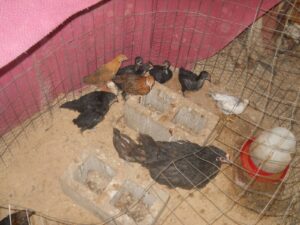 And here’s group 7. 8 originally hatched out, and 1 had started but wasn’t progressing, so I helped it a little by breakup up its egg shell some, and it made it out, although I found it dead soon after. 🙁 However, the other 8 are still doing fine! 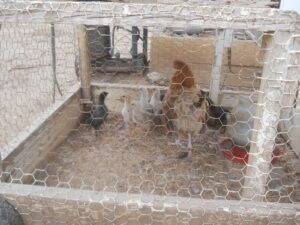 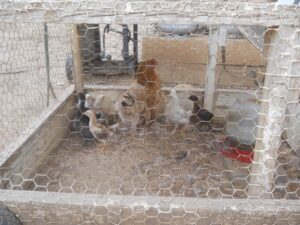 Again, we are always very thankful to God for these new provisions, and any food He might grant from them, for us and others, we pray!

The Lord has graciously continued to grant more chicks this 2021!

This was a surprise pair, group 3. I heard some cheeping in the barn, and eventually tracked it to the loft, and sitting on a bucket of rope on the shelves in the left was a mama and a chick! Whaaaat? An egg had fallen off as well, but I grabbed her and her youngin’ and all the eggs and put her in the brooder barn in a caged area, and she ended up hatching out another one, so we have these 2 extras now this year!

Since this picture, one had gone knock kneed (ie. its knees bending the wrong way slightly) and spraddle legged, but I put an electrical tape binder around its legs to keep them together but spread apart like normal, and have been working with it, and at least now it’s able to keep itself upright. The other one is now out in the chicken pen: 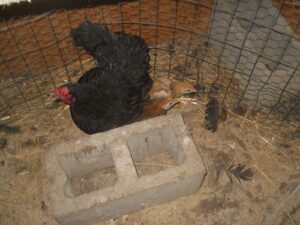 And here’s group 4. We put 12 eggs under this mommy, and not a one was unhatched…wow! 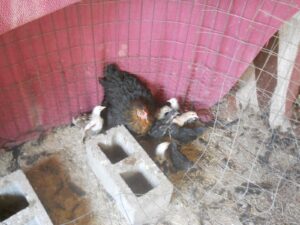 And here’s group 5, which has 5 chicks in it! (although 6 were hatched, 1 died pretty quickly) 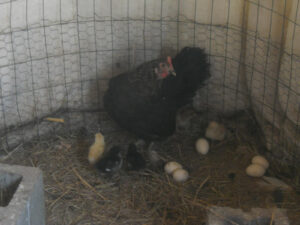 And here’s a video of them all. Group 3 I had to film at night because the mama hen was starting to pick on them, so I had to get her out of there that night: 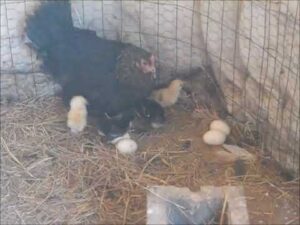 As always, we are very thankful to God for Him graciously granting these new provisions on the homestead!

Once again, one of our hens got broody this 2021, and after tucking her away in the brooder barn, she hatched out a bunch — not even sure how many…maybe at least 9, and I believe they all have made it so far!

Here are a couple of pictures of them all: 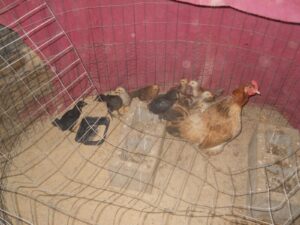 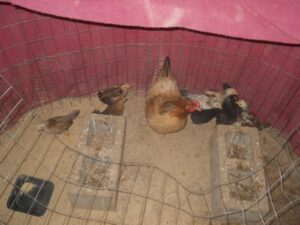 We once again thank the Lord for His gracious provisions in granting this next set of 2021 chicks! We are thankful the eggs can go to help others!

That time of year rolled around again this 2021, hens getting broody, and some of ours don’t always get broody in the barn or chicken tractor…

One of our hens didn’t come back to roost one night. I think it was the next evening, I thought I’d go see if I could somehow find her out in the woods somewhere, which is where I hoped she was vs. having been eated by a predator. I circled around the back side and west areas behind our house. I headed down one direction, and saw what I thought was a plastic bag in a thicket of weeds with no leaves because it was still winter-ish, and I thought, no way was that the hen. But, lo and behold, it surely ended up being her! An amazing gift from God to find her back there, somewhere I would not usually look!

When we tried to get her, she ran off, but we were able to track her down, and so we took her and her eggs and put them in the brooder barn, and God graciously granted I believe it was 5 chicks, and all 5 are still going today, although sadly, it appears one is having a problem with its foot — she’s walking on it crimped backwards…don’t know if it’s an injury or a disorder. But, we pray the Lord might grant it healing.

Here are a couple of pictures of them all: 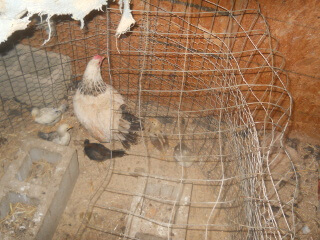 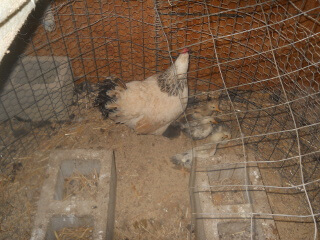 As always, we are very thankful to the Lord for these new provisions, and we pray they benefit His people in some way!

We are very thankful to the Lord for granting our 8th chick hatching of 2020!

We found this mommy in the barn on a bunch of eggs, and moved her into the brooder barn, and by God’s granting she did her job, and hatched out quite a few! I’m not sure exactly how many there are, although we did lose one a couple of days after it was hatched, but the rest are still going strong! 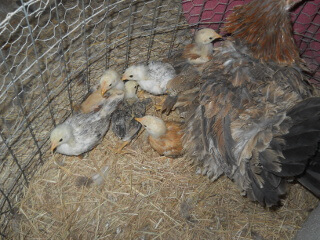 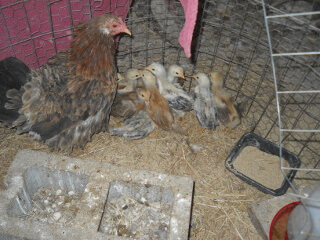 And here’s their video. Watching the new life here reminds me of this verse:

John 11:25 – “Jesus said unto her, I am the resurrection, and the life: he that believeth in me, though he were dead, yet shall he live:“

Once again, we thank God for His provisions of these new chicks, and we pray they’re used for His glory and the benefit of others!

The Lord in His graces and mercies granted another two chicken chick hatchings this 2020 — the 6th and 7th!

Here’s group 6. No interesting stories, just a broody mama and her 9 new youngin’s! 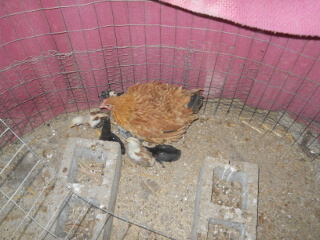 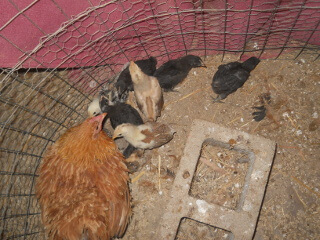 And group 7. This hen has been around a while, and I believe this is her first, hatching 8 new little ones! 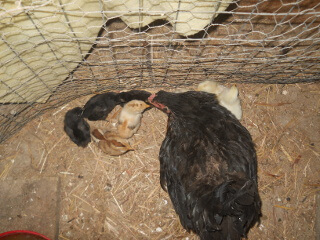 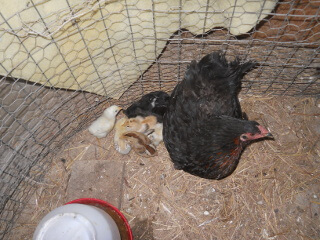 And here’s their video. Watching them here reminds me of this verse:

Matt 23:37 – “O Jerusalem, Jerusalem, thou that killest the prophets, and stonest them which are sent unto thee, how often would I have gathered thy children together, even as a hen gathereth her chickens under her wings, and ye would not!“

May we gather as the saints of God in praise to Father, Son, and Spirit, and especially for the Lord Christ Jesus, who He is as well as what He has done!

As always, we are very thankful to God for the new chicks, and the miracle of new life; and we ask Him for continued health and safety for them, and perhaps for them to be a benefit to the farm and others some day, according to His will!