I like ice cream! Sadly, the stuff you buy in the store has a lot of junk in it. But really, what is ice cream? In its most basic form, it’s simply soft-frozen milk. Well, it just so happens we have milk coming from our goats! And so, we found a very simple ice cream making recipe using plastic bags, and thought we’d try it. We just needed some ice, rock salt (to super cool the milk), and some flavoring.

For our version of the recipe, we put a pint of chilled goat milk in a plastic quart-sized resealable bag, with 2 tablespoons of sugar, 1/2 teaspoon of vanilla, and this time also some chocolate chip cookie dough chunks, and sealed the bag: Then we filled a gallon freezer resealable bag about 1/3 full with ice, and added 6 tablespoons of rock salt: And we put the quart bag with the milk mixture in the gallon bag, and sealed that: And then started shaking. We usually put a towel around it because it’s very cold: 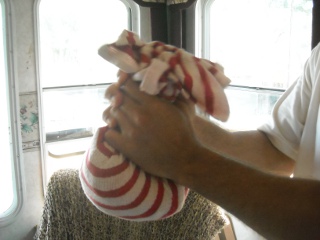 We shook it a couple of minutes longer than the recommended 5 minutes, as it seems to help things freeze better. Et voila! Ice cream!

Here it is frozen in the bag, just after taking it out of the ice and salt: And then in the bowl: 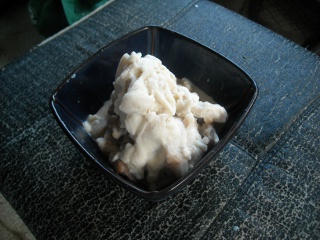 And then in our tummies! While this is something of a luxury, it’s nice to be able to luxuriate generally from the provisions of the land, and in a much more healthy way. As always, we thank the Lord for His provisions!

A neighbor said she had made some Farmer’s cheese with the inexpensive Junket rennet tablets found in the local grocery store, so I thought I would try that first. An online cheese making blog said not to use Junket rennet because it is not the same as cheese rennet. But it was here and within my budget, so it was cheese rennet to me! 🙂 My “first” first attempt was a bust, using the original recipe from the Junket instructions. Not to say it doesn’t work, but that my attempt didn’t work. The recipe calls for buttermilk, which I didn’t have; so I looked online and found you can substitute with milk and lemon juice. So I did that, along with adding 1/4 tablet of rennet dissolved in a little water. In hindsight, I don’t think the combination of those was enough to coagulate the milk. I heated the milk to 65 degrees F according to the recipe, added the “buttermilk” and rennet, and left the covered pot out overnight per the instructions. It was supposed to solidify overnight; but it just never did, even after I left it another 12+ hours. So that went to the chickens.

My next attempt was a conglomeration of a couple of recipes. This time I heated two quarts of our raw goat milk to just below boiling, and added two generous tablespoons of white vinegar (one per quart) and 1/2 tablet of the Junket rennet dissolved in a little water. Since this was previously frozen milk, it was a bit watery; so I decided to err on the side of caution and add too much vinegar and rennet rather than too little. The last thing I wanted was to ruin another batch: 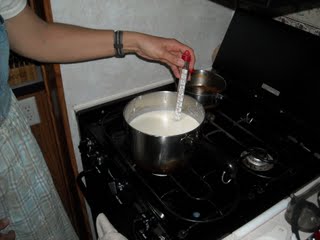 I whisked it all together, covered the pot, and hoped for the best. Well, this time it started to coagulate much more quickly, which gave me hope. By the next day, it was not as solid as I imagine a really good cheese probably would be; but it was close enough! According to the recipe, the cheese is ready when you can poke your finger in and lift the top, gelled layer cleanly from the lower, liquid layer: Then, you are supposed to cut it into 1/2 to 1 inch cubes in order to assist with the “draining of the whey” (sounds like a ceremony). The instructions call for the first cut starting down the middle, holding the knife at a 90 degree angle, and then each subsequent cut tilting the knife a little until you get to 45 degrees by the time you reach the side of the pot. You turn the pot 1/4 turn, and repeat the process, which eventually makes a grid of curd cubes. I forgot to tilt the knife as I cut — oh, well. But, it came out okay anyway: Then, I spooned out the cubes of curds into a handkerchief-lined strainer with a bowl underneath to catch the whey drippings. They say to use cheesecloth, but it just seemed too loose of a mesh, and the handkerchief worked very well for this type of cheese: Here it is all spooned into the strainer. You can’t tell here, but it’s draining like crazy underneath: Quite a bit of whey drained quickly, but it takes 2-3 hours to fully drain: Here are the curds with the majority of the whey drained. Pretty cool, huh?! 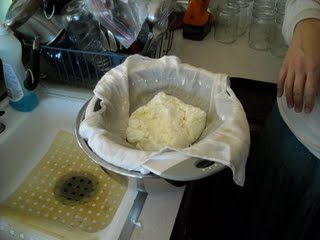 After the main draining, I hung up the handkerchief to draw out the rest of the whey with the help of a bit longer exposure to gravity: So I seasoned it with a little salt, garlic and onion powder, spooned it into a container and put it in the refrigerator overnight. Using two quarts of milk is supposed to make approximately 3/4 lbs. of cheese, and this looked about right: 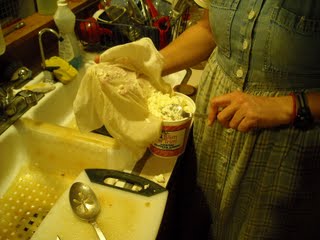 I’m very pleased with the mild, seasoned taste. It has been too easy to eat a lot of crackers topped with the cheese at one sitting! But I’d rather have to combat will power than have to hold my nose closed and gag it down 🙂 All of our does have dried up in preparation to deliver more kids in the Spring, if the Lord wills; so this was my last opportunity to attempt making goat cheese until then; and I’m very thankful it turned out. I’m excited (and not as scared) at the future possibilities! What a great way to preserve milk; and we are, as always, very thankful for God’s direct provisions. Believe me, I know I probably could have done this much better and more “properly;” but, hey, it worked for me; and it’s food! I hope to continue to improve with more practice and maybe somebody out there can learn from my mistakes. Bon appetit!

This was fun to do. Here’s a bit of raw footage, some of which hit the cutting room floor.

In this first one, I held out as long as I could, until the end:

I almost didn’t get the part after this take. Also, based on the last few seconds, it appears that for some reason eating cookies makes me think I’m playing Hannibal Lecter:

Here, finishing up after getting the last goat back into the pen didn’t work out quite as expected:

And just for the record, the milk I drank was from a previous day’s milking that had been kept very cold. Apparently, it’s better tasting and lasts longer when the goat milk is chilled well right away.

There is a lesson in the main video, in case it wasn’t evident: most people go to the store for their provisions; agrarians go straight to the source, which is provided by God directly in accordance with His will, without the need for the world and its government approval, degrading pasteurization, shipping companies, grocery stores, and all of the other in-between means the industrial system requires for sustenance to go from where it’s produced to where it is used or consumed.

Which way is the proper way for a Christian to live?

We are thankful to the Lord for the provisions of our goats and the milk He is allowing us to have.

P.S. In case you weren’t aware of the TV commercials, etc., our video is a take off of the California Milk Processing Board (and then licensed by others) ad campaign, “got milk?”