A House – Update I – Kindle Care

A couple mornings after some pretty good soaking rains, with dew on the ground, vegetation being green, and only a slight southerly breeze expected (which would blow away from the wooded area behind the clearing), we decided it might be a good time to burn down the left-over wood pile collected from clearing the trees. And so, I grabbed the diesel containers, doused one end (I was hoping to have it burn very slowly from one end to the other and thus didn’t pour diesel all over the pile), said a prayer asking God that we not burn the place down, and lit it. Meanwhile, Sue started filling water containers to have around the fire, and I got some shovels and rolled the generator into position next to the well and hooked up and strung out several hoses in case they were needed. Once the fire started to go, I figured there was no turning back.

There was a slight north breeze to start (which was blowing into the side where I started), and that helped burn things down a little quicker, but was also into the direction of the woods. However, the fire maintained a slow burn as I monitored it, and I would pour diesel on the edges to try to keep them going as the middle was burning out nicely. Eventually the breeze changed to southerly and (easterly and westerly at times), which at least brought a little more of a comfort level.

Here is the fire about half way done. I did have to put out a little fire that started to crawl away from the main fire, but easily did so, thankfully, with a shovel and some water: 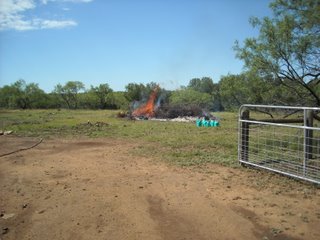 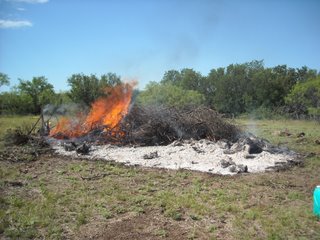 And here it is burned down. It smoldered for a couple of days, which I was hoping would help burn down the stumps more. We could see the coals glowing at night, and we prayed they would stay put. A couple of nights later, some thunderstorms blew through bringing some heavy winds, which really whipped up the sparks and cinders from what was still hot, but it had been raining already pretty heavily, and so we weren’t too worried, although we prayed some more that the fire wouldn’t ignite somewhere else on the land: 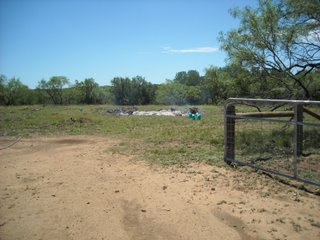 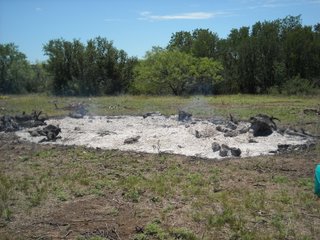 We burn a lot of our garbage, and whenever I interact with a fire and how hot it is, I think of things spiritual regarding fire:

(It was a little hard to understand one part, and I wanted to clarify: the words are, “…how the Bible talks about the eternal torment in flame, in hell, for those who aren’t saved, who don’t fall at the foot of Christ for salvation, and Christ alone, and His righteousness…” Very important!)

We are thankful to God for allowing us the opportunity to burn down the wood pile and continue the house project, and we are very grateful He in His mercy kept us from making mistakes with the fire, held the wind back, and kept the fire in control.