With November upon us, it was time to put our male and female goats together for this year’s breeding time! We have goats basically for the milk.

Since our nanny Annie died, we kept a young from from this year’s kid crop to take her place, one we named Annalita in memory of Annie, Annie’s grandkid.

And so, we put her and Lucy with Shakespeare, and moved over Elvis to be with Adeline, Nellie, Lily, and Hassie.

And here’s the video of that day:

We thank the Lord for the provision of the goats, pray they make it through the Winter according to His will, and pray God might grant the offspring in due season!

Well, the results of last year’s goat breeding time are in! 🙂 God graciously granted 4 bucklings and 2 doelings, although there was another doeling, but she was still-born.

Here are some pictures when they were going to the kind gentleman who buys our goats:

Very sadly though, the Lord, as owner of the goats, decided to reclaim Annie, whose two bucklings are these last two pictures. Thankfully they were 7 weeks old when she died, so we didn’t have to bottle feed them.

Annie was also our little orphan from way back. Here’s a video of her and her brother Spot drinking off the bottles!

This is Hassie’s (Annie’s daughter) daughter (in front), which we’re keeping to replace Annie. We’re calling her Annalita, in honor of grandma. 🙂

We always thank the Lord for His gracious provisions, and for the milk, and we pray the kids do well for the new owner!

Early November means goat breeding time — time to put our billies and nannies together in hopes the Lord might graciously grant offspring starting in April, when usually it’s starting to warm up!

Even though we tried to keep some new does we kept from last year’s offspring away from the bucks, one got to one of them and had kids, and one didn’t, and so this year is her first time with the boy goats!

And without further ado, here’s the adventure from this year!

As always, we are grateful to the Lord for His continued provisions, and we pray He might grant offspring, according to His will!

After goat breeding time at the end of last year, by God’s graces birthing time came about this past Spring! And here are the results! 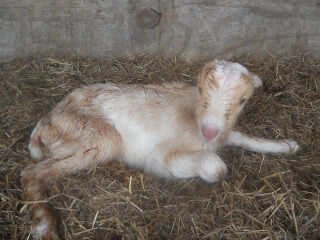 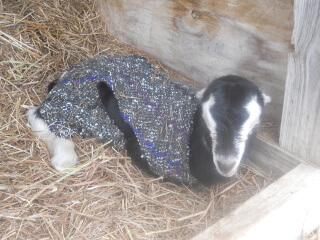 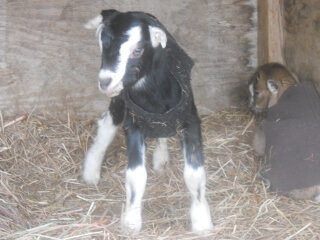 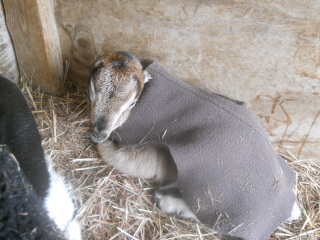 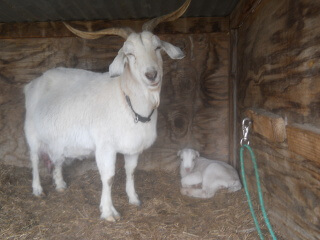 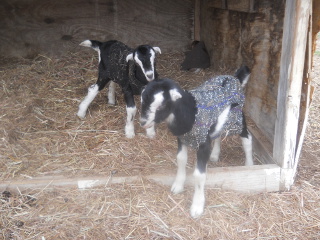 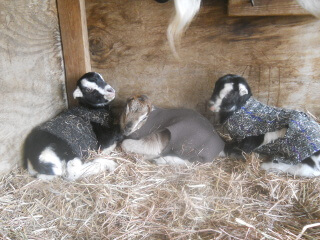 This one wasn’t supposed to get pregnant this year, as she was born last year, but she apparently found a way. 🙂 And we’re extra thankful she had no birthing complications: 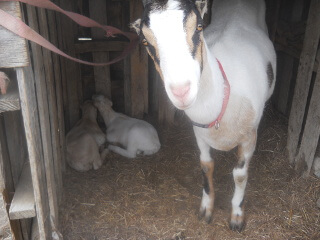 And here is their video through the whole kid season from births to leaving with their new owner:

We are very thankful to the Lord for these gifts, the healthy and safe mommies and kids across the board, and we are thankful for the milk He provides from them!

Here’s a little around our homestead at the beginning and end of Texas’ 2021 arctic blast!

This was after the first main night — snow and cold, with forecasted windchills down to -18F. These were I believe our worst temperatures we’ve experienced here, even after the 2011 freeze. The thermometer says about 4F: 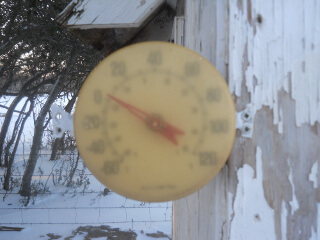 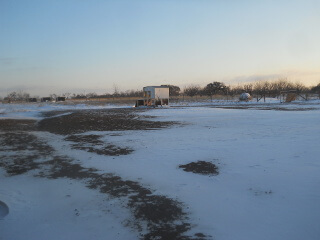 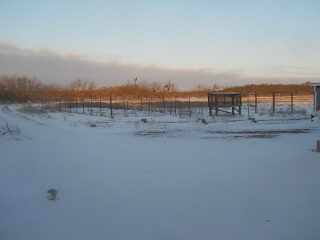 I was a little worried about the cattle, given there are some young ones, but thanks to the Lord, they all made it through ok! 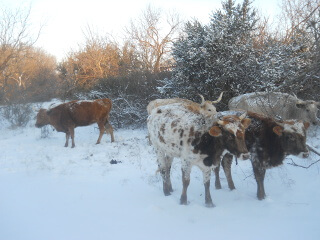 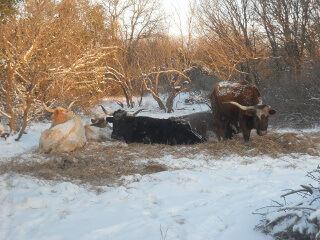 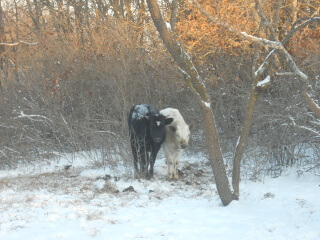 During the week, Sue’s “onesy” (coveralls) in front of the wood burning stove was the favorite for the domestics: 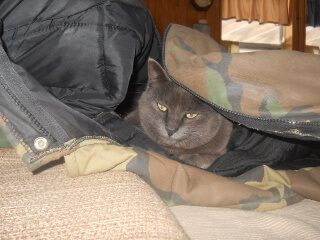 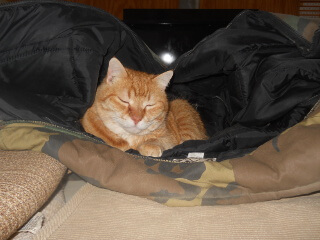 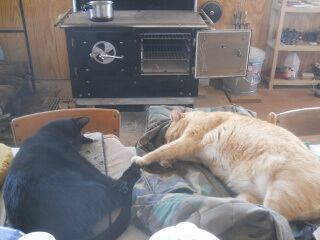 On the first day after a week of these freezing temperatures, things started getting back to normal. Here’s our resident stray hanging out on the cistern spigot, which we had double wrapped with blankets the whole time, allowing us to use it too whenever we needed: 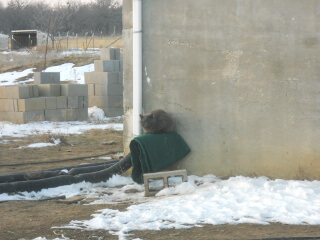 And here are all the goat accoutrements hanging on the fence after Sue took them off: 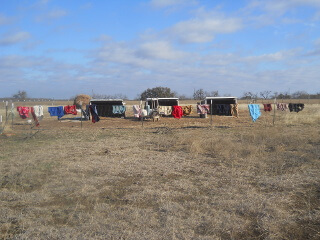 Those were just a few pictures, but we show a lot more in this video, which has the day after the first main night as above, and then after coming out of it 5 days later (including a surpise from a momma cow!):

All throughout, the Lord was merciful in granting all the animals come through (yes, that missing rooster from the video showed up!), and helping Sue and me with strength to do all the care-taking!

We have no grid electric or water, which actually worked to our advantage, as we always had electric and good water as needed. We pray for those still suffering from the effects, but also hope people might consider their situation and on whom or what they depend for life sustenance.

We also saw how we believe God pre-set up provision before we really knew what was coming, even though they seemed a little “cross” to us at the time: the boy goats had knocked off the top of their hay bale, but Sue just took that hay into the barn, and it ended up being their main food for the week; and I had pre-put out hay bales for the cows, and one had been eaten down a lot and spread out by the time the cold hit, and another spread around some, but those also afforded bedding for the cattle. Also, both the tractor and truck starters went out at the same time a few weeks ago, we needed both for this cold front, and so they were ready to go.

Once again, we are very thankful for God’s help through 2021’s arctic blast, and for the gift of the new little heifer calf!

It was that time of year again, to put our male goats and females together for mating season. We wait until now to try to get any offspring being born in April, when most of the cold weather is typically over.

This year, we had kept two of our female goat kids in order to increase the herd, but didn’t want to breed them this year as we feel they are just a little too small still.

And so, we moved them to their own field, and put the billies and nannies together, and here’s the video of all that fun and frolicking adventure!

We thank the Lord for His continued provisions, and pray He might grant the offspring next year, according to His will!

Back in November of last year, it came time for our annual goat breeding season — when we put the females with their respective males — in hopes the Lord grants goat kids in the Spring!

Well, indeed God graciously did, and here’s a little update…

First, over the Winter we lost one of our favorite does, Hannah. She succumbed to something pretty quickly over a day and a half or so. She was one of a kind — sometimes we called her Houdini, because she would be hooked up to the fence line or in a shed, and Sue would turn around to do something, and then Hannah would walk up behind her. And so, Sue would hook her up again, and turn around, and not long after, again, Hannah would walk up! 🙂 She was also our most LaMancha breed of the females we had, and I had wanted to keep one of her female offspring, but the Lord in His perfect wisdom and goodness had other plans. But, we are thankful for the time He granted her to be with us, and the offspring and milk from her over the years. We miss her! This is she with her kid from last year. Bye Hannah-bo-banna… 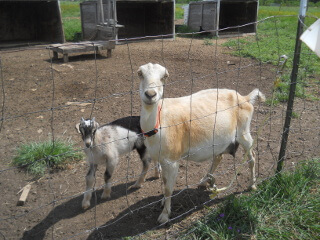 But, continuing on, we try to time it in November so the kids are born when it’s past the cold, but we had later cold this year, so it was goat coat time! 😀

Here are two of the bucklings in a barn stall with their mommy Nellie: 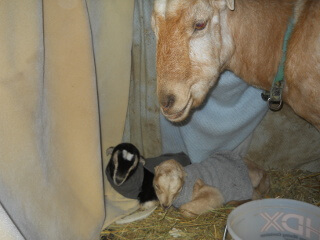 And Annie with her triplets, two bucklings and a doeling. With this one, the first kid started trying to come out back (not back end, but back) first! So, Midwife Sue got in there, spun the kid around to get hooves heading out, and then Annie was able to deliver that kid, and then kids two and three came out shortly after (we show just after kid three was born in the video below). Wow! Thanks to the Lord for helping Sue and for granting the safe deliveries! 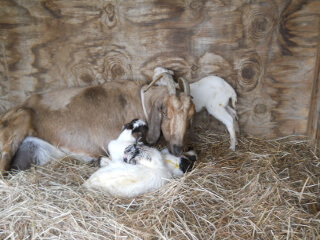 And Adeline with her two bucklings: 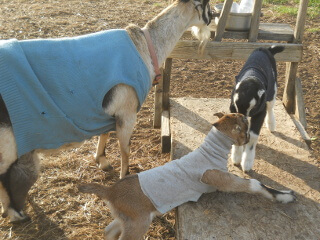 Finally, Lucy brought up the rear this year, although sadly she gave birth to two underdeveloped, stillborn kids (last year, she aborted all her kids prematurely). And the little doeling that was born was pretty feeble, so Sue syringe-fed her mama’s colostrum for a couple of days. But the Lord saw fit to keep the little one going and get stronger, and she ended up doing just fine, thanks to God! 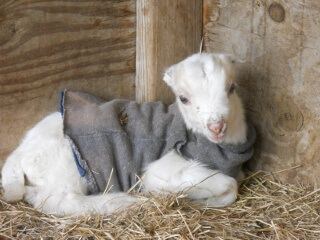 Here are a few more pics: 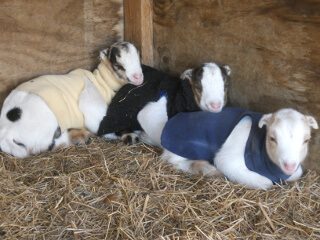 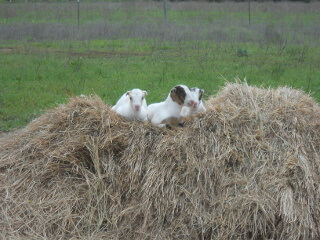 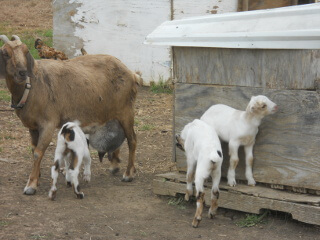 To start to replenish the herd, we decided to keep the two doelings, so they are officially part off the group now, Hassie and Lilly (you can see more of them in the video below)!

We are very grateful to God for these continued provisions; the milk He grants from them (which is why we raise goats); again, the safe deliveries for the moms and youngin’s, and His guidance for Sue as “midwife”; and for granting continued perpetuation of the herd!