I’ve been through an excellent book from Puritan Thomas Brooks called “Precious Remedies Against Satan’s Devices”, where he identifies the various ways Satan goes about his work, and offers remedies to help against those devices.

I believe it’s important we are aware of these things, as the Bible says:

1 Peter 5:8 – “Be sober, be vigilant; because your adversary the devil, as a roaring lion, walketh about, seeking whom he may devour:“

And we are to resist…

James 4:7 – “Submit yourselves therefore to God. Resist the devil, and he will flee from you.“

Ephesians 6:11 – “Put on the whole armour of God, that ye may be able to stand against the wiles of the devil.“

…but only with God’s help:

Psalm 28:7 – “The Lord is my strength and my shield; my heart trusted in him, and I am helped: therefore my heart greatly rejoiceth; and with my song will I praise him.“

Below is another device of Satan to draw a person to sin, sin being something we should hate in ourselves since sin is against God and hated by God as well. The device is to get us to shy away from afflictions and difficulties of life, but the remedy is to understand and welcome the loving, chastising hand of our heavenly Father!

And the worst thing possible for a man is to be left to himself to commit sin:

19 Because that which may be known of God is manifest in them; for God hath shewed it unto them.

20 For the invisible things of him from the creation of the world are clearly seen, being understood by the things that are made, even his eternal power and Godhead; so that they are without excuse:

21 Because that, when they knew God, they glorified him not as God, neither were thankful; but became vain in their imaginations, and their foolish heart was darkened.

22 Professing themselves to be wise, they became fools,

23 And changed the glory of the uncorruptible God into an image made like to corruptible man, and to birds, and fourfooted beasts, and creeping things.

24 Wherefore God also gave them up to uncleanness through the lusts of their own hearts, to dishonour their own bodies between themselves:

25 Who changed the truth of God into a lie, and worshipped and served the creature more than the Creator, who is blessed for ever. Amen.

26 For this cause God gave them up unto vile affections: for even their women did change the natural use into that which is against nature:

27 And likewise also the men, leaving the natural use of the woman, burned in their lust one toward another; men with men working that which is unseemly, and receiving in themselves that recompence of their error which was meet.

28 And even as they did not like to retain God in their knowledge, God gave them over to a reprobate mind, to do those things which are not convenient;

32 Who knowing the judgment of God, that they which commit such things are worthy of death, not only do the same, but have pleasure in them that do them.

10 I am the Lord thy God, which brought thee out of the land of Egypt: open thy mouth wide, and I will fill it.

11 But my people would not hearken to my voice; and Israel would none of me.

12 So I gave them up unto their own hearts’ lust: and they walked in their own counsels.

13 Oh that my people had hearkened unto me, and Israel had walked in my ways!

14 I should soon have subdued their enemies, and turned my hand against their adversaries.

15 The haters of the Lord should have submitted themselves unto him: but their time should have endured for ever.

16 He should have fed them also with the finest of the wheat: and with honey out of the rock should I have satisfied thee.

I’ve included the other remedy points below for context, but for this blog post am just focusing on Remedy 3. However, you can listen to the whole section in this audio reading (it starts with Device 7):

…or you can listen to the entire book on this page:
Thomas Brooks – Precious Remedies Against Satan’s Devices

The eighth device that Satan hath to draw the soul to sin, is,

Device (8). By representing to the soul the outward mercies that vain men enjoy, and the outward miseries that they are freed from, while they have walked in the ways of sin.

Says Satan, Do you see, O soul, the many mercies that such and such enjoy, that walk in those very ways that your soul startles to think of, and the many crosses that they are delivered from, even such as makes other men, that say they dare not walk in such ways, to spend their days in sighing, weeping, groaning, and mourning, and therefore, says Satan, if ever you would be freed from the dark night of adversity, and enjoy the sunshine of prosperity, you must walk in their ways.

[Footnote: It was a weighty saying of Seneca, there is nothing more unhappy than he who never felt adversity. Some of the heathens would be wicked as their gods were, counting it a dishonour to their god to be unlike him. – Lactantius.]

This is just the language of a world of ignorant, profane, and superstitious souls in London, and England, that would have made them a captain to return to bondage, yea, to that bondage that was worse than that the Israelites groaned under. Oh, say they, since such and such persons have been put down, and left off, we have had nothing but plundering and taxing, and butchering of men, etc.; and therefore we will do as we, and our kings, and nobles, and fathers have formerly done, for then had we plenty at home, and peace abroad, etc., and there was none to make us afraid.

[Footnote: It is said of one of the emperors, that Rome had no war in his days, because it was plague enough to have such an emperor. You are wise, and know how to apply it. [The allusion, no doubt, is to Charles I., and the agitation for the Restoration of Charles II. Cromwell died Sept. 3. 1658. – Editor]]

Remedy (1). That no man knows how the heart of God stands by his hand. [ie. people cannot know how God feels about them just by how things are happening in their lives]
Remedy (2). That there is nothing in the world that does so provoke God to be wroth and angry, as men’s taking encouragement from God’s goodness and mercy to do wickedly.
Remedy (4). That the wants [lacks] of wicked man, under all their outward mercy and freedom from adversity, is far greater than all their outward enjoyments.
Remedy (5). That outward things are not as they seem and esteemed.
Remedy (6). Consider the end [purpose] and design of God is heaping up mercy upon the heads of the wicked, and in giving them a rest and quiet from those sorrows and sufferings that others sigh under.
Remedy (7). That God does often most plague and punish [with spiritual judgements] those whom others think he does most spare and love [because of their temporal ease].
Remedy (8). Dwell more upon that strict account that vain men must make [on judgement day] for all that good that they do enjoy.
Remedy (3). The third remedy against this device of Satan is, solemnly to consider,

Woe, woe to that soul that God will not spend a rod upon! This is the saddest stroke of all, when God refuses to strike at all: Hos. iv. 17, ‘Ephraim is joined to idols; let him alone.’ ‘Why should you be smitten any more? you will revolt more and more,’ Isa. i. 5.

Freedom from punishment is the mother of security, the step-mother of virtue, the poison of religion, the moth of holiness, and the introducer of wickedness. ‘Nothing,’ said one, ‘seems more unhappy to me, than he to whom no adversity hath happened’.

Outward mercies ofttimes prove a snare to our souls. ‘I will lay a stumbling-block,’ Ezek. iii. 20. Vatablus’ note there is, ‘I will prosper him in all things, and not by affliction restrain him from sin.’

Prosperity has been a stumbling-block, at which millions have stumbled and fallen, and broke the neck of their souls for ever.

May the God of infinite mercies never leave us to ourselves, to walk in our own ways! And may we be thankful to Him for His loving, chastising hand!

Heb 12:6 – For whom the Lord loveth he chasteneth, and scourgeth every son whom he receiveth.

Rev 3:19 – As many as I love, I rebuke and chasten: be zealous therefore, and repent.

Just recently, Sue came briskly walking up to the house, which usually means something’s wrong on the homestead. I braced myself and went out to meet her and asked her what was wrong. But what ended up being “wrong”, or at least of some immediate attention, was that she discovered a chicken mommy in the barn loft with a whole batch of chicks with her! Near the edge of the loft too, which is probably 10 feet off the ground! Wow!

Here’s a picture of the stairs going up to the loft — she made her nest way in the back corner there by the buckets: 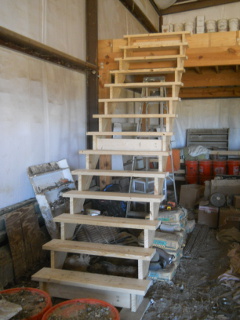 We went up there, and sure enough — a bunch of them! They had at least moved away from the edge, and so we grabbed mama and put her in a cage for the moment, and then gathered up her little ones into a pet carrier, and put them all into the brooder barn (formerly the summer kitchen).

And here they are now! We believe there are 15, and it appears the hen hatched out all the eggs that were under her. She must have just been dropping eggs into her nest herself, and then did the sitting. This mother is a good one too — very often broody: 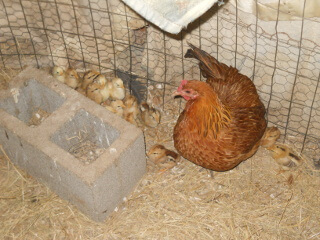 We are very thankful to the Lord for this unexpected gift to start this 2020, and for the safe hatching, and that He had mama set on the nest in the barn! We pray they are used for His glory in some way, and the benefit of the homestead and others, as He wills!