In the last blog post about the abandoned puppies we found, I mentioned there had been some “casualties” of some of them getting out. Besides a turkey one time, when they got out another time, they got not only another turkey, but they got hold of Gustav, our gander, the one on the right in the picture above, the last, lone goose we had. He survived a couple of days after the attack, but finally succumbed.

It’s always so sad to have to say goodbye, especially when it comes from “friendly fire” (ie. not a wild predator). Gigi went similarly.

Here’s a video of when Gigi met Gustav:

Here’s Gustav escorting Gigi around in his designer-wear watermelon rind:

And here’s Gustav playing guardian to the turkeys:

He’s the last of our geese, that started when our neighbor gave us Gary, and then we got Gigi, then Augie, and finally Gustav; and so ends our time of having geese here on the homestead. They’ve always been good “watchdogs”, letting us know often when someone’s coming they don’t recognize.

We always try to remember all things are the Lord’s, and that we don’t actually lose anything, since things are never really ours — they’re His, and we’re just the stewards, and He can reclaim them to Himself at any time.

But, we thank Him for the time He granted them to be with us.

Below is Gustav’s burial site, with Gigi’s headstone on the right in front of the tree, Gary’s is the stone just to the left of that amongst the others, and Augie’s is the pointy one on the left in front of the two branches coming out of the ground (if you click the picture and then zoom in, you can make out the writing on the headstones).

Gigi the Goose Gets Gustav the Gander

With the loss of our gander Augie, I figured it’s just not right for Gigi our goose to be alone. Plus, they cost basically nothing to maintain, and can sometimes alert when some things are not status quo around the farm.

And so we kept an eye out for a mate for her on one of the internet lists.

And recently, the Lord granted we find one fairly close by! Yea!

Apparently a young Chinese-breed gander, we went and picked him up and introduced the two, and they quickly became “an item”! Yea again, and thanks to God for both!

And we decided to name him Gustav (Goose-tav 😀 ). He reminds me somewhat of Gary, in the way he looks and sounds. Fond memories of Gary. 🙂

Anyway, here are a couple pictures of Gustav and Gigi, with him on the right: 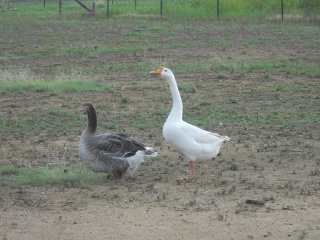 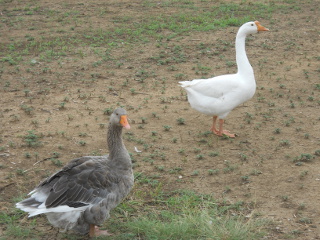 And then a video of their introduction and them getting to know each other:

They continue to do very well, hang out all day together, and we’ve even seen Gustav act in a way that looks like he’s protecting her. 🙂

Again, we are thankful to the Lord for granting Gigi a mate so she won’t be alone, and that they were very quickly like old friends! We pray they might benefit the Church and perhaps the farm in some way.