After our previous attempts at drilling a well with no success, having water on the land became a focus of primary importance. We had been buying water from purifying stations, but that obviously wasn’t a long-term solution.

If you ask the typical person today where they get their water, they’d say the tap. I’d bet though most of those people never really consider from where THAT water comes. Well, when you have no water on your land, and you need some (because generally a person does 😉 ), you need to consider ways to have it available.

On land that is not hooked up to a paid water supply, there are typically 3 ways of getting water: ground (well), surface (ponds, streams, etc.) and rain (it is also possible to get water out of the moisture in the air, but the amount of water from that is quite a bit less from some of these other ways, and often times require electricity). Many country folk might typically think of well water or pond (tank, in Texas-talk) water as sources for themselves and animals, but many don’t consider “rain harvesting” as an option. What they probably forget is that possibly their well and surely their tank are filled from the results of rain falling, and the land area that feeds their well or tank is basically a large catch-water system with the water table or tank being the storage facility.

We decided that eventually, Lord willing, we would like to have all 3 sources of water, mostly because of the importance of water. And so, the first water supply on which we concentrated was putting up a catch-water system.

In concept, it’s actually very simple. You need a flat surface to “catch” the rain water, and then some way of diverting it into a storage unit. Since we had no buildings available with roof lines and weren’t at the point of being ready to build something with one yet, we decided to just put up a very simple shed roof that would feed an above-ground water container, which we chose to be a black (to keep the sun out so algae and the like won’t grow easily thus avoiding chemical treatments) 2500 gallon polypropylene tank (which apparently holds up well against the sun’s deteriorating rays).

Here are some pictures of our shed roof catch-water system: 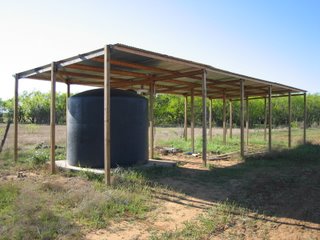 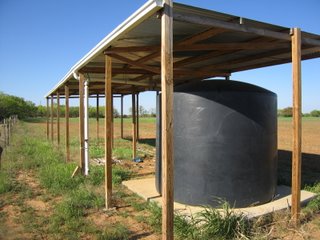 On these notice the down spout. When rain hasn’t fallen for any length of time, dirt and other potential contaminants collect on the roof. When it begins to rain, those contaminants are carried along with the first amounts of water coming off of the roof. And so, this down spout is called a “first-flush diverter”, and it is for catching that first amount of water. There is a racket ball in the tube which, as the tube fills with water, floats up and then wedges against the reducer at the top, thus stopping any more water from going into the tube. From then on, the water coming off of the roof bypasses the down spout heading for the black tank. 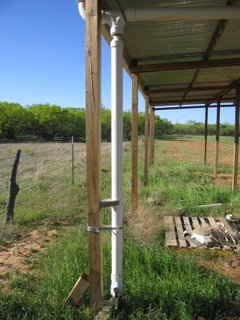 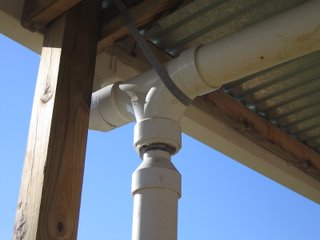 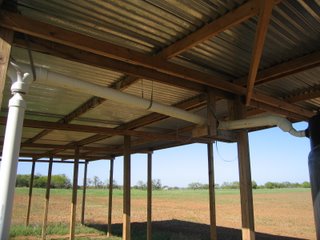 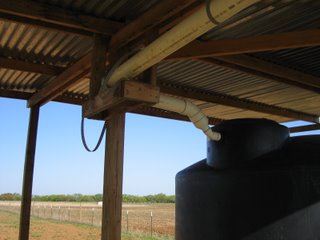 At first we had a nozzle on the output end of the tank that was a typical external water faucet, but it only allowed a small amount of flow coming through it; and so we installed a 3/4″ valve that essentially lets the water straight through to the garden hose. 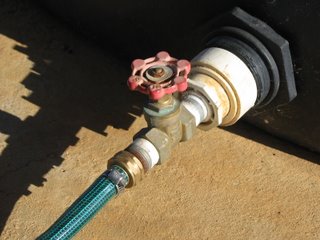 And there is our water, graciously and mercifully granted according to God’s providence! 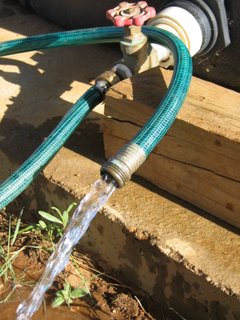 From there we add a 1/2 teaspoon of bleach (to kill bacteria; I read somewhere that it needs to be Clorox, but other Web sites don’t indicate that: use at your own rish) to our 6-gallon water containers (the typical dose is 1/2 teaspoon for 5 gallons) for the water that is to be used in our camper’s water system (for brushing our teeth, etc.), and from there we filter the water through our British Berkefeld Berkey water purifier for drinking. The bleach treatment is probably not needed, especially since we have a Berkey and everything could be filtered through it first. Still though, the Clorox method can be used to purify water if another filtration system is not available. Of course there are other ways to purify water, like boiling, or making your own activated charcoal filter, etc. that would be considered more long-term solutions (ones that don’t require perpetual maintenance).

The Lord has continued to be very gracious with our catch-water. Since it was installed and began to be filled, it has never been empty.

One thing we have learned, and is the type of thing we had hoped to learn moving out here, is a greater appreciation for God’s providence. In this case, every time we go to fill up containers out of our catch-water, we try to say a “Thank you” to the Lord for allowing us that provision of the water.

And sometimes, and we try to learn to do this more, we try to focus on the spiritual aspect of the type (or shadow) that many (if not all) of the temporal things around us point to. While we need water temporily to survive or we’ll die, the Lord Jesus says He gives water that gives everlasting life (John 4:13-14), and ONLY He can give it (John 14:6), and He does so according to His will (John 1:11-13; Eph 1:5,11), and if He doesn’t we will remain spiritually dead (Eph 2:5).

We are grateful to the Lord for His spiritual provisions of Himself and His giving of spiritual life to sinners (those He has come to save: 1 Tim 1:15), and we thank Him for His temporal provisions of the harvested rain water and the means of storage He has graciously allowed us.