Last night, it was time to go to sleep. Sabbath had begun a few hours earlier, I had already laid down, and Sue was preparing to retire. It seemed there were an unusual amount of insects in our camper; and while She was at the sink, a medium sized beetle-looking bug was trying to crawl out of the sink, but kept slipping back. As Providence would have it, Sue decided to help the little guy, grab him, and toss him outside. She got a hold of him with a tissue, opened the screen door to our camper, started shaking him out, and looked down only to behold something unexpected. She called to me; I was already starting to doze and wasn’t pleased: I thought she must have seen an extra large spider or something. I complained, but she said that she had seen a snake just below our camper door slithering around my rain boots, which sat next to the palette at the bottom of the steps. I looked down but didn’t see anything. She said it had crawled back underneath the camper. I walked down the steps with the flashlight; and sure enough, there it was. It was a rattle snake, and a fairly thick one too!

Wow. Ok, what to do. It was now coiled up between the two tires of the dual axle on this side of our camper. Shooting it with a pistol or shotgun, or even a .22 from the angle I was standing would probably just cause the bullet to ricochet into the camper. I figured I’d try to poke it enough with something so it would move out into the open, where I could shoot it. I got prepared with the shotgun and .22 rifle, Sue and I donned our rubber rain boots, and I grabbed our hoe and started poking it with the head-end. Well, all that did was cause it to move farther under the camper, coil up behind the rear tire, and start rattling. Hmmm. I went around to the back of the camper with all of the (literal) hardware, and examined the situation from there. It appeared I might have a shot with the .22 from back there without causing a severe ricochet. I prayed I was correct, because the 100 pound propane was off to the side but sort of down line. We prepped the shotgun in case it decided to escape, I lined up the .22 using the backside of the camper wall to brace the barrel against (the shot needed to be pretty accurate as the snake was right next to the tire), aimed for the body because I couldn’t see the head, prayed for a true shot, and fired. The Lord answered the prayer with a hit. This stirred up the rattler; it shook its tail and snapped at the bottom of the camper, but then recoiled, only this time exposing his head. I aimed again, fired, and connected. The rattling stopped, and its movements slowed. It exposed its head once again, and I shot it there again, and this time its movements mostly ceased. We waited a little bit to make as sure as possible it was dead, and using the hoe I slid it out. Sue went and got the machete for me. I pinned its head against the ground with the hoe and chopped it off to finish the ordeal. 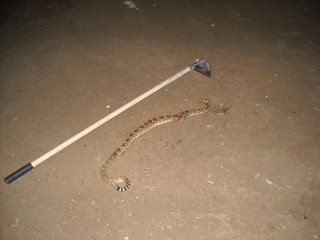 This is it the next day, minus the rattle: 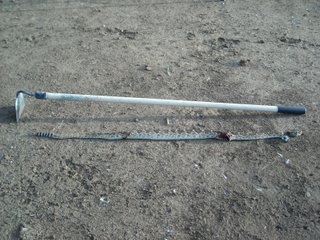 And here’s Sue taking it to the chickens for breakfast: 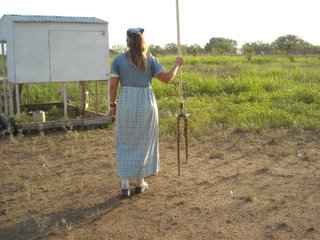 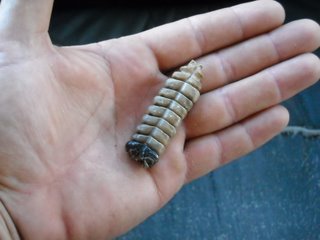 We thank God for His mercies in all of this (these are just the ones we’ve recognized): Sue rarely picks up bugs from inside the camper to throw them out; I often step outside with only sandals on during the night for restroom breaks; the propane tank hadn’t blown up; and the rattle snake was disposed of. Thanks to Providence for granting and causing our safety, and for His guidance and protection. We are very grateful to Him.

We also thank the Lord for granting this as a faith builder for us in His always seeing and caring eye, and we thank Him for His mercies in bringing us safely through this.