Although apparently inbreeding goats is a defined method for increasing a herd, we decided to use outbreeding instead, as inbreeding can bring to surface undesirable traits (as well as desirable ones, which from what I’ve read is why people inbreed); so our plan is to trade our males born here with other folks who are raising dairy goats. Our neighbors the Sustaires are doing just that, and the Lord had granted them twin bucks around the same time as He did our triplet bucks, which are half Nubian and half what Winnie is, which is part LaMancha. We also had Donny available, who is a little older and full Nubian. Theirs are Alpine-Nubians, and so we agreed to swap goats. They chose to take Athos, the first born of the triplets, partially because of how well Winnie is producing milk vs. how well Betsy, Donny’s mother, is; and we chose the one of theirs that had horns (one of theirs was born without them) so that he could compete with our other males since we are not de-horning our goats.

Since he’s part Alpine, that makes him rather “Piney,” and so we decided to name him Piney Tim (we’ll probably call him Timmy for short). And so here he is: 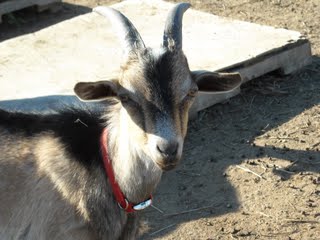 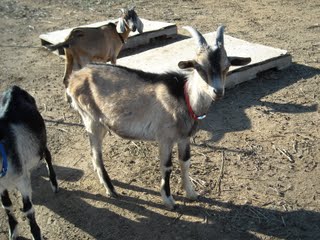 We’re thankful to the Lord for allowing the perpetuation of the animals for all of the families here on the land, and for allowing us to have this opportunity with a local family to husband the animals in this outbreeding way.