A few months ago we did a blog post about our goat kids graduation, where we put all the does with the bucks we had planned for them, the first generation offspring does to be with a buck for the first time. Well, a couple of days ago, the Lord graciously granted our first second generation kid, a buck, to our Nubian doe Marie. His sire was Eastwood, who I recently mentioned had died during the winter. But, he apparently helped bring along Marie’s first kid; and in honor of him, we’re calling the new kid “Woodrow.”

He has his father’s colors; and he sure seemed large for a new-born; but I have a feeling we’re used to twins and triplets, who probably end up a little smaller than a single kid might, although I can’t be sure. It appears he’s doing pretty well: 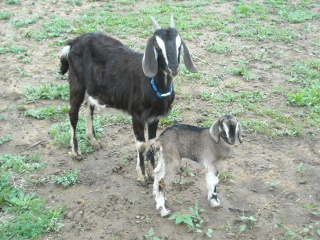 Here he is in action. The whining goat in the background is Pammy, who recently gave birth as well:

We are thankful once again to God for His graces and mercies in granting this healthy new provision to us.