One of the hens we got last year went broody some time in December, and sat on eggs in our barn for weeks on end, including through the big cold front that went through in February. Well, just recently, I went to put a little food and water next to her as I would do each evening, and from underneath her I heard a “cheep-cheep”! With William, our cat, running around, we knew we had to get her into our mini-chicken tractor (see the middle of that blog post); and so we moved her and the chick in there; and here is a little video of them together in the mini-tractor. (I say in the video we first heard the chick in the mini-tractor; but that was incorrect, as we first heard it in the barn, and then moved the hen and chick into the mini-tractor from there):

We don’t know what breed the little one is, so it’ll be interesting to find that out eventually, Lord willing.

Also recently, a lady in a nearby town had some new pullet chicks available for purchase (she indicated that for the most part we can know they are females by the fact that they have even-length feathers on their wings; she said it may not be 100%, but has worked well for her in identifying the sex of the chick); and since we were looking for a few more female chicks (using the wing-length method, we think the hatchling is a female), and since this lady’s would be about the same age as our new hatchling, we thought we might pick them up and put them in with the mother hen and the new chick, hoping the mother hen would adopt them. Well, that didn’t work at all — the mother hen actually attacked them pretty violently; and so, since our new hatchling was at least a week and a half old, we decided to pull the mother hen out and put her back with the rest of the flock before adding the new chicks with the hatcling. This seems to have worked pretty well, as the chicks all seem to get along, although the mother hen has spent a lot of time around the mini-tractor trying to get back with her chick.

Here is a picture and a video of the new young flock. The new chicks are Araucana breed, which lay green eggs; and we picked up all 10 of them that she had: 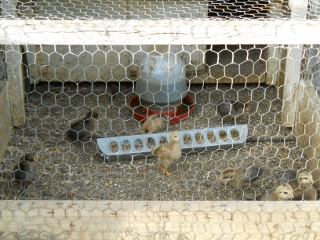 We are grateful to the Lord for granting a dedicated broody hen, and the bringing forth of a new chick; and we pray the broody instinct was passed along to this new chick. We are also thankful to God for allowing the provisions of the other new chicks, and we pray He grant that they become productive resources here.