When we bought some new chickens late last year, two of them were game hens. Well, apparently they’re good setters, because we’ve now had a second one go broody (here was the chick from the first hen); and the Lord graciously granted some new chicks to be hatched!

And here they are:

This is something of a big deal to us, because, in our desire to separate unto God and His direct providence, if we’re to have animals and their products, we need them to perpetuate; and having chickens that do that has been spotty at best, because most of the ones we’ve had don’t sit.

And so, we are thankful to the Lord for His granting of these new chicks and hens that are good setters; and we pray the female chicks pick up the sitting trait so they can continue to propagate here on the farm, according to God’s will.

The Lord granted our first calf this year, a little heifer calf, to our cow Carlita. As you can see, she’s a light tan, and so we’re going to call her Caramela, which is caramel in Spanish: 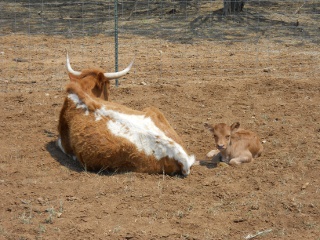 And here is a little video:

We are grateful once again for God granting continued perpetuation of the cattle here, and for the granting of this new heifer calf. We pray for God’s glory in her, and wisdom in raising her.

Learning How to Steer

In owning cattle, and other animals, sometimes you’re going to not want them to be able to reproduce. For us, we’ve handled that by pen rotation, keeping bulls we didn’t want with the females away from them. However, if we want to use them for meat, it’s apparently better to castrate them as they should put more weight on that way.

And so, this is our first adventure into the process of turning a bull into a steer via castration. The calf, which came from a cow owned by Mr. Woods, is owned by Mr. Plumley, who watched some videos on the Internet as to how to do this, and proceeded in the following way, which, from the research done, is actually less painful and more successful than “banding” (which was tried here unsuccessfully a couple of years ago as we believe the banded bull reproduced):

We’re grateful to the Lord for being able to learn this process and for it being successful (the calf seems to be doing just fine a couple of weeks later), for granting this calf to Mr. Plumley, and for a safe delivery; and we pray the calf will grow to become what God has in mind for it, for His glory and the benefit of His Church.