In a previous blog post, I showed a meat dryer I had put together. This was for the purpose of brining and drying meat as a method of food preservation that didn’t require freezing or canning. We are always looking for ways to do this, as freezers and canners require dependence on the world systems for continuing supplies (fuel, electricity, parts, etc.).

The final picture of that blog post showed meat from one of our Longhorn bulls that had been butchered hanging and drying.

After a few weeks, at which time the meat looked about dry, I had collected the meat off of the dryer and put it in a plastic bucket and covered it, just as a place to contain it as I wasn’t exactly sure what to do with it (we’ve never processed meat like this before, you know 🙂 ). Well, since it was in plastic, which doesn’t breathe, I was a little worried that moisture, which is a seedbed for bacteria, had got in the bucket perhaps; and so I put the pieces back on the dryer again for a couple more weeks (they probably didn’t need to hang that long — I sort of just left them out there). This actually seemed to dry them out further.

And then, all that was left, was to try out the goods! We soaked them in water for 24 hours, as after 12 hours the meat still wasn’t very pliable. Even after 24 hours, they weren’t much more softened; but I didn’t want to leave them out in the open in water like that too much longer for fear of bacterial growth, although the water was probably somewhat salty, which perhaps would have prevented any problems:

And then I cooked them on the grill: 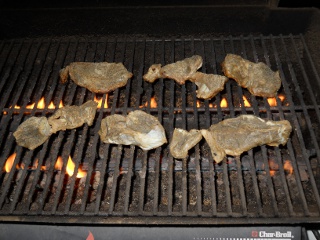 And here they are all cooked: 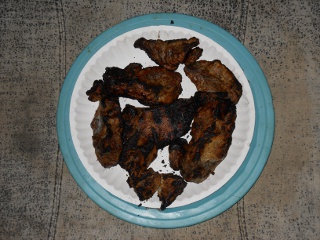 And here is the meal that Sue prepared for it: 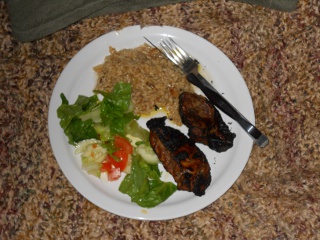 Well, obviously by the fact that I’m writing this, we didn’t die, which we thought was a plus on the whole experiment. 🙂 (Did I mention we’ve never preserved meat like this before, and being so colonized in our thinking that things MUST be frozen to keep, it was hard not to worry.)

At any rate, it was a little dry and a little tough to chew, but just tasted like well-done steak. It wasn’t salty, was certainly palatable, and except for the chewiness, was pretty good actually.

It did seem to stop up “the system” a little, but shortly things “moved” along as normal.

All in all, it wasn’t too bad, for meat that had never been processed the way the world says to do it. Perhaps we’ll try soaking it in a meat-tenderizing marinade the next time, Lord willing. Anyone have any recipes?

We are very grateful to the Lord for granting the knowledge of this food preservation method; His creation that graciously allows for the survival of man (eg. salt killing bacteria); His granting of a successful experiment in living according to His order of things; and for this step away from the world, we pray, as unto Him, for His glory.