A House – Update XXII – Great Room Ceiling, Floor Insulation and Some Move In

This past first Wednesday of the month for community work day, the group graciously worked at our place to help continue with some things on the house we’re building. In preparation for being able to install a wood burning stove for the kitchen, we needed to get the ceiling paneling over to that area. As we did when the group helped put up ceiling in the bedroom, I wanted to start in the middle of the house instead of on one side, so that if the side we started on was “off” compared to the other side, we could end up with squaring problems. And so, we needed just enough panels to get from the middle of the house over to where the stove is planned to be. Running them offset by half, I figured two per row would hopefully allow us to keep the next row’s panels fairly square on the previous row’s panels.

And here’s the crew helping do just that: 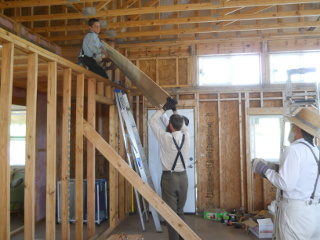 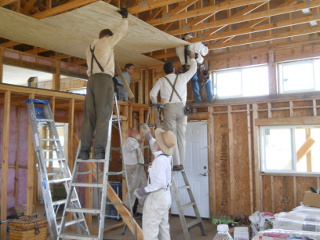 And here are all of them in place. The stove is planned to go over there on the right near the wall where there aren’t any windows:

A very long time ago, probably when we bought the wood for the floor, I had bought the floor insulation, and it had been sitting in our barn for years. Recently though, with the roof on, we moved the insulation into the house, and I had started to install it. On this last workday, with the ceiling panels going up fairly quickly, and with the time left over, the men helped continue and finish installing the insulation: 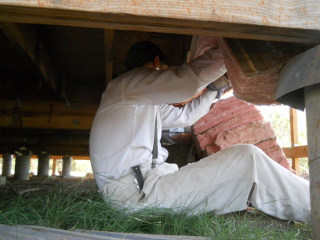 Sue had been in town at one point fairly recently, and I had asked her to stop off at the hardware store to try to find these insulation holder-type things that slide between the joists and apparently help keep up the insulation. I guess the store didn’t have them, and someone there said people often use chicken wire, but that can be expensive for this type of application. Someone else suggested using wood-strip runners, which I thought was a pretty good idea, since we had the left-over 2x6s we were using as braces to twist the porch posts, and so I took them and starting ripping some of them into runners for the insulation. For a 2×6, I found that setting the guide on the rip saw at 23/32s (1/16 past 5/8 + half of the next 16th) worked just about right to evenly rip the board into 7 pieces: 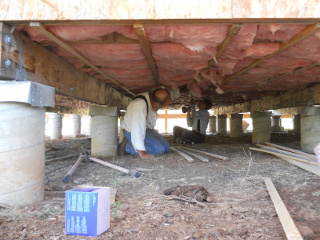 And here’s a picture showing them installed: 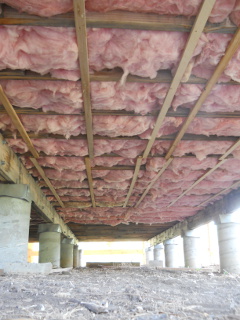 After this work day, thanks to the help, all of the floor insulation is in place, and I only have the runners to finish for the last two sections.

The ladies helped us with some things on workday as well. They helped clean up some of our furniture that’s been in the barn since we moved everything in there, and we were able to move a lot of it into the house.

Here the ladies are helping clean: 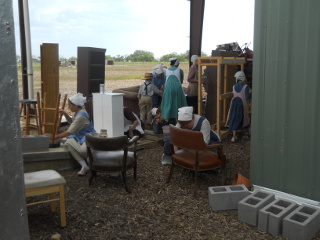 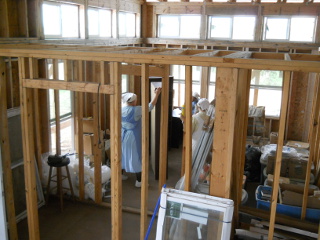 And here is the wardrobe I had built when we had first moved here now in the bedroom closet: 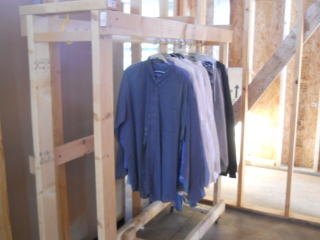 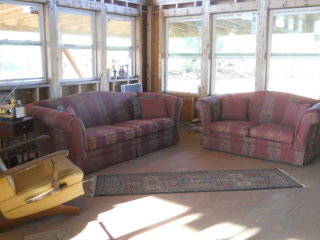 And toward the kitchen: 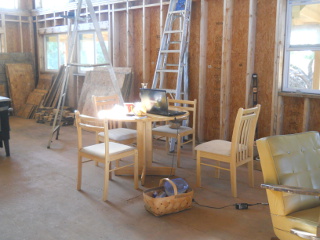 And here are book shelves, where we’ve finally been able to unload many of our books from the tubs we had them in from our move to Texas: 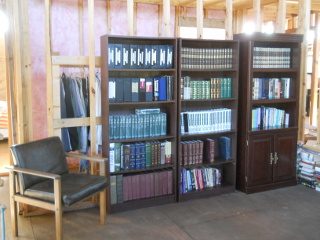 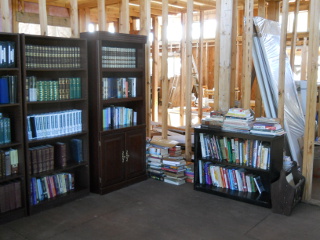 And this globe was a nice gift, which we finally get to put up: 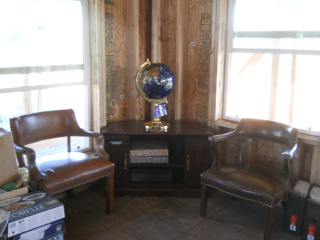 Finally, with the heat of summer already starting, and with our camper getting very hot during those times, with very little ventilation, a few weeks ago, we decided to set up our bed that’s also been in the barn since we moved everything into it. The plan was to be able to position ourselves right in front of the window screens while we slept, so hopefully any breeze would keep us a bit cooler, and thankfully, it has worked pretty well.

The bedspread and other accoutrements we were able to get using gift certificates we had received for our wedding back in 2003! We had been saving them for things for the house, and we’re grateful to be able to finally use them: 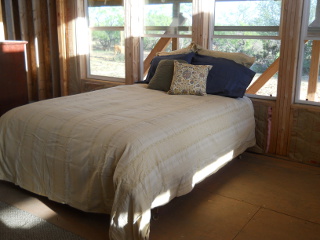 As always, we are very thankful to the Lord for His continued provisions, and allowing progress on the house. And we thank Him and the folks here for the help and service from this workday to be able to get some of these things done.

Here was a moment of relaxing: