Hogs, Hogs on the Range – Update I

I had originally made an extended area from the pig pen for our pigs to be able to roam more using a solar powered electric fence system. This worked well for a couple of years, but then started to not work, and the pigs would just go under the wire. I even tried stringing a ground wire between the two hot wires, but that didn’t work either. I have a feeling the ground became too dry to conduct well, but I’m not sure what the root cause really was. And so, between that and having to eventually and continually replace the battery on the solar charger, I figured I need to try to do something differently.

I went through several ideas in my head, like rock walls, or goat fencing, but time and costs are issues. Eventually, given we had a whole bunch of cinder blocks left over from the original plan for our root cellar/storm shelter, which didn’t work out, and discovering that 16-foot, 50-inch high cattle panels are only $20 a piece, I thought I could end up with about 30 feet of fairly solid fence line for not too much expense. Plus, I figured that if it didn’t work, we wouldn’t be out too much. And, I could build them in sections, so that I could slowly extend the pig free-range area as I had time and resources to build fence sections.

And here’s how it went…

I cut the cattle panel longways down the middle, and then into about half sections but where no panel horizontals were sticking out: 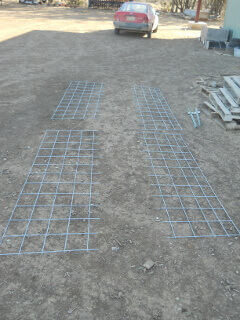 And then I set up the cinder blocks and set the cattle panel piece in place, leaving one section open, which will be an overlap section where I can wire two sections together, although one of the sections would need to not have overhang so it could butt up against the pig pen fencing: 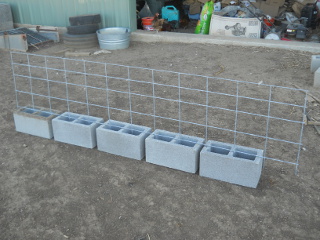 It just sort of worked about fairly nicely, except on the last cinder block, I needed one with a groove for the cinder blocks to position evenly: 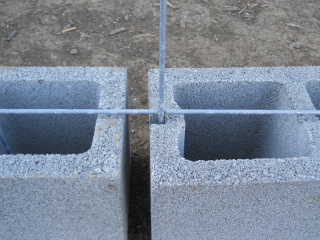 Then I set the 3-foot t-posts in place and wire them to the panel. I really was hoping that I didn’t mess this part up because Foreman William was there inspecting! 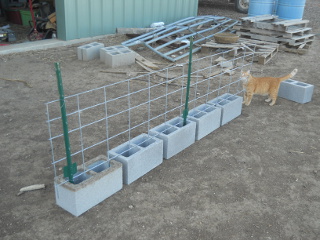 And then it was time to pour in the concrete. I mixed in dirt so I’d use less, although I think I mixed in too much because the concrete above the top of the cinder blocks ended up a little crumbly. Being they were in the sun and it was quite warm that first afternoon, I needed to keep the concrete moist and had to hand-tamp any cracks: 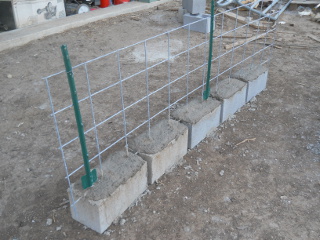 Also, if I had left over concrete after a fence section was poured, I made small concrete piles that would fit in the hole of a cinder block that I could use for the next fence section: 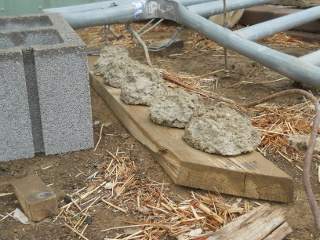 And here are the four sections complete: 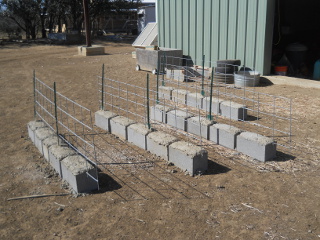 I built them over by the barn so I was nearer equipment, but that meant I needed to get them over to the pig pen. And then I thought that I could place a board across our goat shed caddy and drag that using the truck. And here are the fence sections loaded. I loaded them by setting a board in place in the back, pulling the fence section over the back of the caddy and onto the board, and then sliding the board forward so I could repeat the process for the other sections: 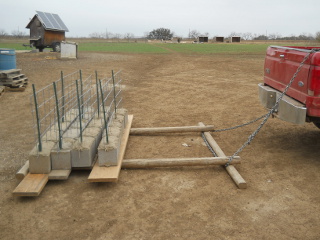 And it worked! Here they are, delivered: 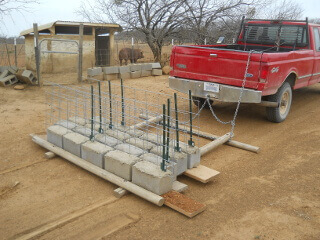 One of the things I wanted with the design was to be able to move the sections myself. Given the difficulty of getting them on the shed caddy, I wasn’t sure, but by tipping them over and pulling one side at a time, I was able to slide them into place. Here is the back side: 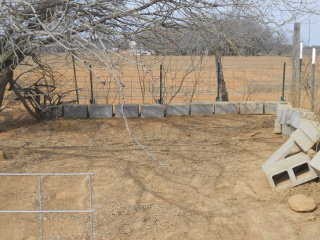 And in front. I’m still not sure if I’m just going to join the sections in front there or put up some kind of gate. Either way, if we need to back up an animal trailer to that front gate of the pig pen, I figure I can just un-wire the fence sections, and move the sections apart to leave enough room: 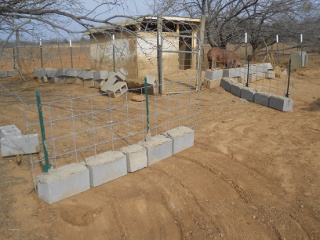 I plan to make at least another set of four sections, although I might need a couple more sections to be able to make a nice enclosed area; and then we should be able to give it a real test by having a small, but not too small, area completely enclosed. I think it’s going to work — hopefully by God’s graces it will, and we look forward to seeing the pigs being able to start to roam a little more, Lord willing!