When I had bought the seed to plant the north field with sorghum almum (with some millet as a filler), I also had bought enough to plant one of the goat fields that has just turned into more of a place in which the dogs can run around than anything else.

So, just a couple of weeks ago, after the field had been plowed, I wanted to get it planted before some potential rains, and so Sue and I got out there and just walked around, hand-throwing the seed: 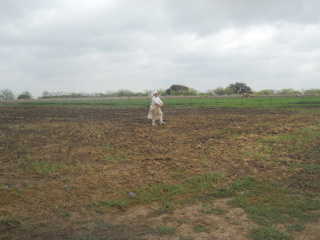 Also, I thought I’d use the shack caddy similarly to how we did the north field, dragging it; but I really didn’t want to use the truck or tractor; and although I forgot about it initially, I didn’t want to hook up the chain to make drag “fingers” like for the north field, as we wouldn’t have been able to pull the caddy by hand with them.

So, Sue graciously accepted my invitation to help me drag it around the field, and we got out there and did it. The result wasn’t as good as having the chain “fingers” behind, but I was hoping it would be sufficient to cover enough of the seed, and that the rains would do the rest.

And here we are on our little “romantic” walk in the field together, including shots from the DavidCam and the SusanCam! 🙂

Thanks to Sue for the help and nice time together! 🙂 And thanks to the Lord for the provisions to plant, and we pray the Lord might grant the grass in the field, so we can be further sustaining, relying on Him directly!