After what we believe is a Spanish black heritage female turkey just showed up on our farm one day, and after finding a local heritage turkey breeder and fetching a tom for her, and after not really seeing much go on between them, something happened the other day…

Trina, our turkey hen, was prone to sitting on her eggs. She tried once in the orchard, but we got her out of there as that’s just a situation for her to get eaten up. She also had sat on eggs on our hay stack in the barn, but we had problems with a big snake that was eating her eggs. And then once more, she started sitting on her eggs in the hay manger we have in the barn stall. She also had a little chicken hen helper who would take her eggs and sit on them, and then Sue would move them back under Trina.

Well, what do you know! About 25 days later…little cheep, cheeps coming out from underneath Trina! Ha! How neat is that? What a nice and gracious gift from God!

I figured it was time to get her and them out of the barn as 1) they’re snake bait, and 2) once she goes mobile they’re cat bait. I didn’t really know where to put her other than the summer kitchen, but all we had were the little chicken cage-pens. So, I took a couple apart and strung them together to make a larger pen, and it created a nice area! And then we moved them — we had found one dead next to her, and we believe there were another two that didn’t make it out of the egg, but she had 3 live ones under her, which Sue scooped up as I grabbed Trina, and now they’re all in there very nicely, all still alive! How neat!

Here is a picture of them: 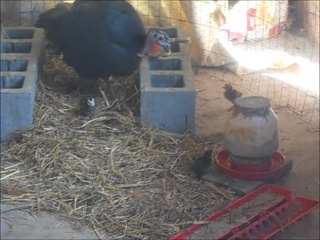 And a video of the adventure!

We are thankful to the Lord for this very nice, gracious and unexpected gift! May they go to good use, so God would glorify Himself in some way, and that maybe His people might benefit!