This is our first garden update for 2017, although we actually did plant a Spring garden…

In times past, I’ve tried to plant regardless of how well set up the environment was — “Oh, it doesn’t really matter how the soil is…just put the seed in the ground!” Well, as I’ve found out, and I’m sure anyone reading this who has successfully done gardening realizes, that doesn’t work, and is of course not biblical (the soil must be good to bring forth fruit — see (Matt 13:1-23).

Anyway, I thought this year, I’m going to dig out any of our clay soil and put in compost, and then plant…even though our seeds are really old. Well, as I found out once again, and those reading this who have done gardening know, old seeds don’t work either.

Out of the maybe 150 or more (at a guess) seeds I planted, here is the one plant that grew, a broccoli I believe: 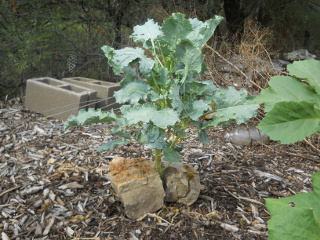 I believe now! 🙂 And we are thankful for this one plant. May God prepare the soil of our hearts by His Spirit and plant His gospel and law in it so it will bring forth much fruit, and we will be obedient to Him!

Following that, and waiting until the ground warmed up, the plan was to plant okra, which works well out here. I dug out holes, filled with compost as needed, and used seeds given to us by a gracious person…from this year! 🙂

Well, not that we’re entitled to anything, or that God is under obligation to grow anything, or that these things happen without Him gifting them, in His graces, He has caused them to grow, and start to bring forth the edibles! 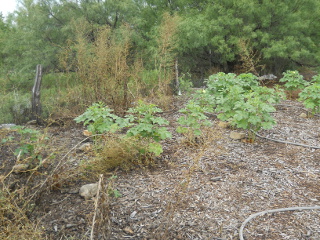 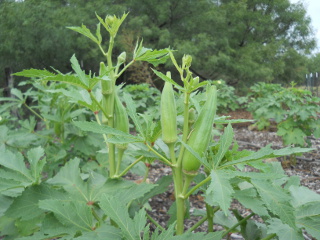 Here’s a hopeful okra. Beautiful, not only visually, but in the potential of fruit coming from it (like even the lowest of Christians, because they have the image of Christ stamped on them)… 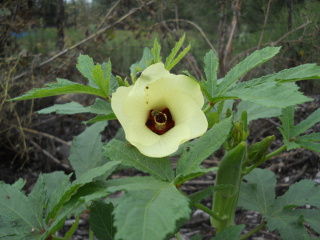 Also, in our other garden area, Mr. Bunker graciously gave us some sweet potato cuttings. After, I put the root ends under the mulch against the ground and then covering them with the mulch that was there, I found I really needed to water them well, but once doing that, the vines really started to take off, and here is how they are now: 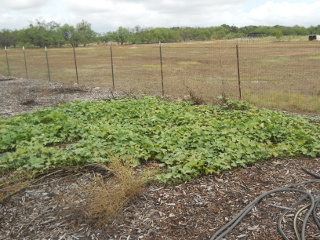 Finally, Mr. Stonger also graciously gave us a goji berry bush and a couple of blackberry cuttings, which have been doing well…

The goji berry bush put out quite a few berries earlier in the year, but once heat hit it, it lost a lot of its leaves, so I started watering it a lot, and it has come back nicely, thanks to God. 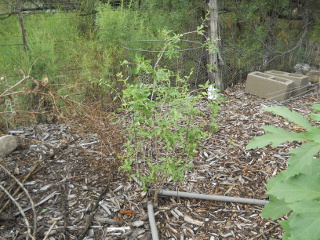 There’s even a berry there now, and some purple flowers growing: 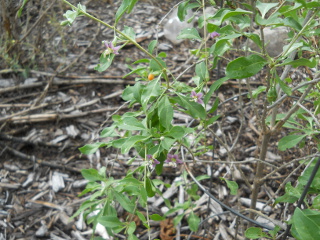 And here are the blackberry plants. I had to put them in tomato plant cones to give them some support. Also earlier in the year we got a couple of blackberries, which were yummy! 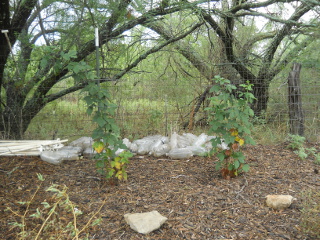 As always, we are very grateful to the Lord for His provisions, and the understanding about Him we can gain through being involved in His creation and studying His word!