The results of breeding time 2016 are in and gone now, and so we thought we’d introduce you to 2017’s goat kids!

First, this is our buck Rocky. Even with a leg injury, he’s still able to get the job done! And our new buck Shakespeare…first round with our does for him. He’s shown dragging a stick so he doesn’t jump the fences. Also, we had him dehorned because they appeared to be growing over themselves and causing him grief, although the dehorning operation was quite some experience, where after numbing the area, the vet used a cord saw to saw through, Shakespeare screaming the whole time…arg…and just wow. Because the sinus cavity extents into the horn, he then sutchered head skin over one hole, but didn’t have much for the other one; and so, we’ve been keeping it wrapped or covered with antiseptic and triple antibiotic gel when necessary. Thankfully, it’s slowly healing:

Here are some pictures from some of them earlier in the year: 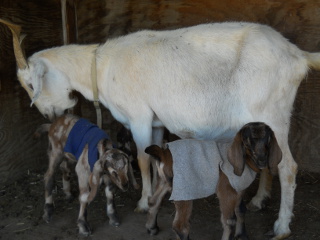 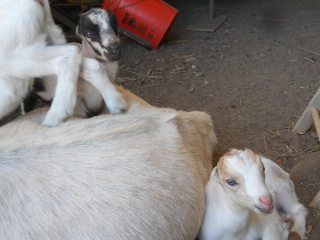 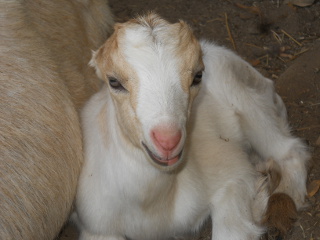 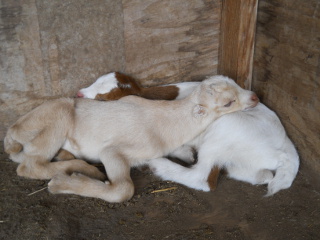 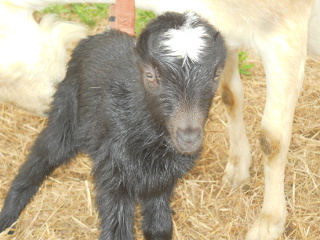 And then let’s go around the horn, introducing each doe & her kids…

This is Pammy, with her kids Toro and Pablo. We thought Toro looked like a tiny Longhorn bull, and then kept the Spanish naming idea for his brother: 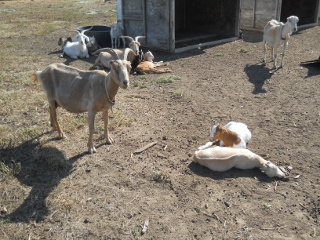 And here is Adeline, with her kids Leah, because she looks like her mommy, and we took the “L” from her name; and Arielle, because her coloring was black/grey/black and reminded me of an Oreo cookie, and so we used the “A” from her mom’s name as well: 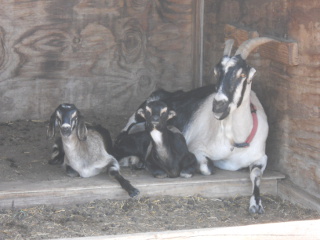 And then this is Annie with her kids Paula and Linus. Paula, because she looks like Pablo, and Linus because he looks like Adeline and we just used the “L” from her name: This is Gracie with her doeling Dottie, because she has a dot on her nose. Gracie had a buckling too, but he sadly died in less than a day. Gracie started having rumen problems at the time she gave birth, so Sue faithfully bottle-fed Dottie in a partial manner to help supplement: This is Hannah with her kids Cicely and Bison. Where the black comes from, we have no idea, since Shakespeare was the daddy. The buckling looked like a Bison to us, so we started there, and then went with Cicely to kind of match. Bison was interestingly born three hours after Cicely, and Hannah ended up basically rejecting him, not letting him suckle, so Sue picked up this job too: 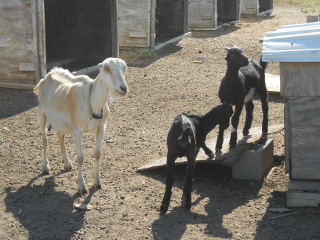 Next is Lucy with DeForest, William and Leonard. Lucy was first to go this year: 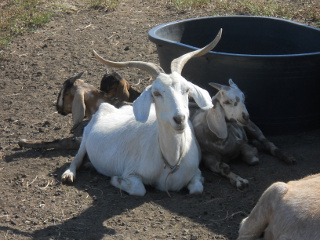 And this is Nellie with her kids Ricky and Nelson. We started with Nelson because he looked like his mama, and then added the Ricky. Sadly, Nellie had a still-born, but these two were just fine: 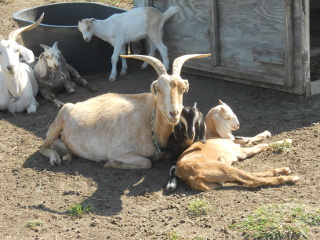 Here is Marie with her kids Maxine, Laverne and Patty. Little Laverne next to her was quite spunky. Sue started to supplement bottle-feed her too the last few weeks, just because she was so small. If you look, where did Patty, the white one in front, come from since Marie’s mate each year is Rocky? We weren’t sure Rocky was getting the job done, so for a very short period of time, we put Shakespeare in with her. Well, it appears both bucks got to her! 🙂 : And finally, her highness Winnie with her kids Shelly, Shelton, and Della. The two “Sh” names because they look like Shakespeare, and Della for the “D” in Adeline, whom she looks like: And here is their video for the year, including the goodbye as they went to their new owner, and a few snippets after that — look for Annie at the end showing off fine goat behavior!

We are always very thankful to the Lord for granting these provisions of the goat kids, and our buyer friend to come get them each year. And we are thankful for the milk from them, which we are able now to use, along with eggs, exclusively to feed our pig. And thanks to Sue for your faithful milk collecting!