The Lord graciously granted another three chicken hatchings of 2017, the 6th, 7th and 8th!

Here’s group 6. I believe the hen hatched out 8: 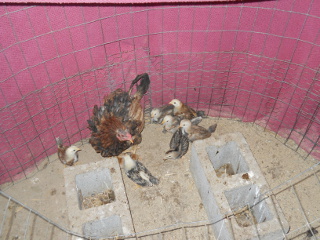 In this group, there was one that had trouble with one of its legs, and would stick it out straight back — you can get a good look at it how it was in the video below. Well, in our experience, a good way to try to help with that is to put binders on its legs, where you use a thin piece of duct tape and wrap each end around each leg, which helps keep the legs together, with the idea that the good leg will help guide the bad one into what it’s supposed to do correctly (like us being yoked to Christ! Matt. 11:29 – “Take my yoke upon you, and learn of me; for I am meek and lowly in heart: and ye shall find rest unto your souls.“).

At first, it was too small for the good leg to overpower the bad one, but as the good leg strengthened, I was able to attach the binder, and it did seem to help. You can see the binders on it in the video as well.

Today, she (which is what it appears it turned out to be) is still going, and able to get around fairly well, which we also show in the video.

And then, here is group 7. The mama was a hatchling from I believe a couple of years ago, and she originally hatched out 11. But…

I can’t remember exactly how this went, one day I did a count, and only saw 10, but thought perhaps I had just miscounted originally. Some time later, I walked in, and there was one dead, and only 7 alive, which means another 2 were missing. What was going on? I looked around in the summer kitchen pantry there, and sure enough, I found a snake in the corner, picked it up, and there was a chick-sized lump in its belly. Arg! And bummer. I don’t know how it got in there, as I had been purposefully keeping the main doors of the summer kitchen closed just because of this snake issue (we’ve had trouble like that before) — maybe it got in through a small hole in external OSB, but it seems it would have had to do that when it was smaller.

Anyway, after getting the snake out of there, the other 7 are still going strong! 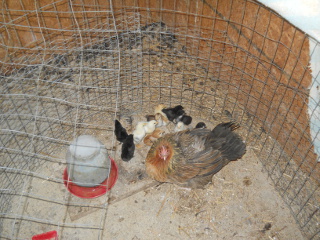 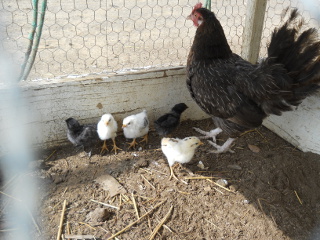 And here is a video of all 3 groups:

Once again, we are very grateful to the Lord for granting these provisions, and for His mercy on the ones He allowed us to keep. They are all His chickens to do with as He pleases, and we are just thankful He has allowed us any. May they be used for His glory!