We are very thankful for the continued perpetuation of the chickens God has graciously granted us, with 3 more hatchings this 2018!

This is group 2 — 11 of them she hatched out! I thought it was 10 originally, but when I moved them into the summer kitchen later, to give them more room, there was a bonus one! 😀 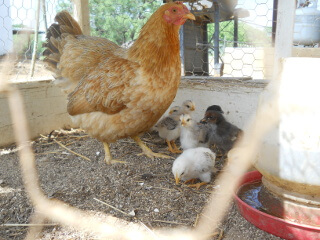 And here they are at night all tucked in with their mommy (I have this in the video as well below): 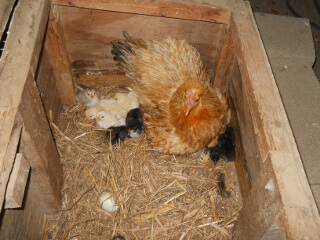 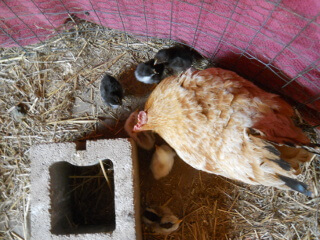 These groups are about the same age, and now about 1/3 the size of the normal chickens. I had somewhat recently moved both groups out into our pen area under some oak trees, and one morning as I lifted the lid on the coup, there were 2 dead ones, 1 with its head and neck slicked down. Arg…that usually means a snake tried to swallow it but couldn’t get it down so quit. I figure the other one just got trampled in the the commotion. So, we’re down 2 from these 2 groups.

And then just last night, I found what I’m pretty sure is one of the blonde mommies from one of these groups basically dead (body completely limp but just hadn’t finished dying, which it did not long after) in the main chicken tractor. Sigh. But, we are thankful to the Lord for any eggs and the hatched chicks He granted from her.

Finally, this is group 4. This one has a sad story too. She originally hatched out 9, but one died within 24 hours. Then one morning I walked in, and one was laying there dead, and one was missing. Arg…snake! Sure enough, I found it in the corner of the room with a lump in its midsection. So, I dispatched it to the compost pile. But the next morning, I walked in, and now 2 were dead, with one having its head and neck slicked down…sigh. I think they were getting in from the corner of the room as the outside siding of the summer kitchen is not complete. So, I put a cinder block inside against the corner, and that has seemed to stop the “bleeding”.

Still, we are thankful for the little 4-pack of chicks God has graciously allowed us to continue to have! 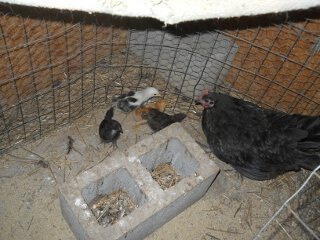 And here is a video of all 3 groups:

Again, we are grateful to the Lord for the provisions of these new chicks! We always pray for the right attitude toward them, that they are not ours but His, to dispense with as He pleases, just as I believe we ourselves are. May we trust His perfect will and give thanks in all things!