Icy What You Did There (New Year’s Eve Snow Storm)

One thing you can count on about Texas weather is that you can’t count on it. So, when they predicted ice and snow for New Year’s Eve into New Year’s Day, we had no idea what to expect. But it came through and we thought we’d share a few pics from it! We’re thankful for the moisture from the storm and for God’s mercy in the weather.

New Year’s Eve day started out rainy and turned to icy rain and then it turned to snow: 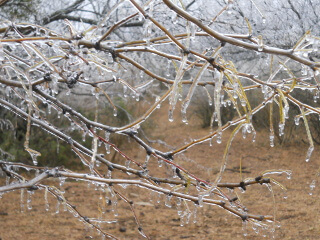 By the next morning several inches had fallen. Our cows had tried to take shelter under our porch roof in the middle of the night so Dave had to get up a few times to shoo them out. Most people wake up groggy on New Year’s Day for “different” reasons; ours was “cow shooing” in the night haha: 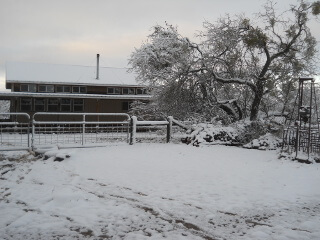 Our firewood pile got completely covered with snow. Thankfully, we had staged a lot of firewood under the porch roof before the storm so we had nice dry wood to keep the stove going. Dave builds a mean fire and the house was nice and warm, thank the Lord: 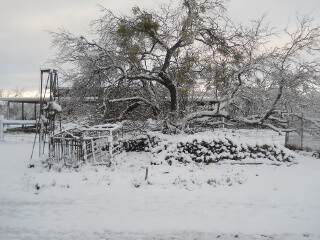 This is one of our garden areas: 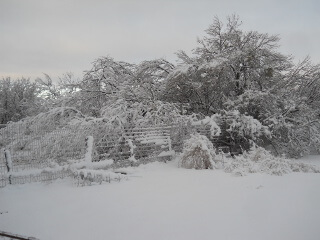 The cows didn’t seem to mind the snow much after it had stopped falling and enjoyed their New Year’s Day breakfast “alfresco”: 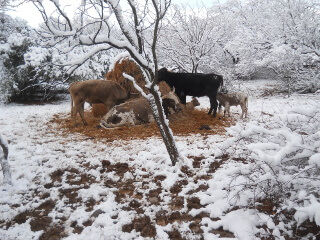 Our local hay man was so kind and thoughtful to contact us and ask if we wanted him to deliver any hay before the storm. It would be difficult to deliver afterwards due to mud, etc. So he dropped off a few bales and Dave put out a couple for the cows before the storm arrived:

The weight of the ice and snow on tree branches wreaked a lot of havoc all over the region. The power in our local town went out for many hours due to fallen branches, etc. And Dave has been busy cutting up more firewood from the fallen branches all over our land. We’re very thankful no person or animal was injured by any fallen branches: 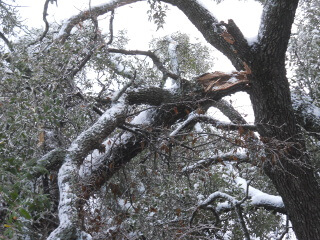 Here’s a token goat picture for any goat lovers. We brought all the goats in the barn to keep them warm and dry. Elvis is sporting his black and dark blue checkered ensemble: 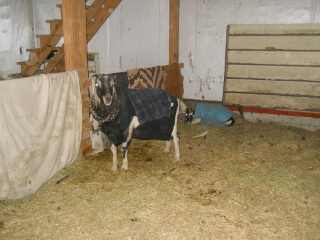 On New Year’s Day our neighbors snuck over and were building a snowman behind our house but I happened to look out the window and we came out and caught them. I think it’s the equivelant of getting your house “TP’d” haha. With an excellent suggestion from one of the children, we decided to call the snowman “Bill”: 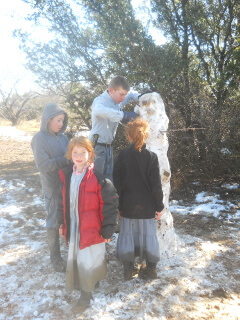 Here are the usual suspects (all very special and precious to us) and Bill! 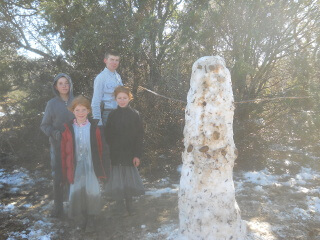 Then yesterday we had another snow storm come through which dropped even more snow than this one. I’d better go look to make sure there are no new snowmen behind our house. :))