Following close on the heels of Tanya’s turkey chicks, another one of our turkey hens got broody in the barn also, in one of the goat stalls.

Tanya and hers were still in the brooder barn (aka. the summer kitchen), so we didn’t really have a place for Tasha, and I didn’t want to put her in a small caged area like we do for our chickens.

Well, Tasha’s chicks started hatching, so what we ended up doing was drop down a couple of extra OSB boards we had and stitch together two chicken fence-cages into a longer run like in the brooder barn. We then covered it all with blankets and bent one end down so I could lean over and access the inside, and we set up their water and food.

And then it was time to try to transfer her and the turklets. The youngin’s were already starting to walk away from her and explore a little, so we just started grabbing them and moving them into the caged area, and Tasha thankfully kept calm. And then with her, we put a large fishing net over her, grabbed her from within that, and put her into the caged area. Thankfully, that all went rather smoothly. 8 turkey chicks in all! Wow, and thanks to the Lord!

Sadly, 1 died pretty quickly, but the other 7 kept going and growing.

Quite a few weeks later, when they all were much bigger, one morning, one of the young was getting picked on, so, with them pretty close to big enough where we were planning on letting them go soon anyway, I decided to let them free at that time.

Here they are just before we got them going: 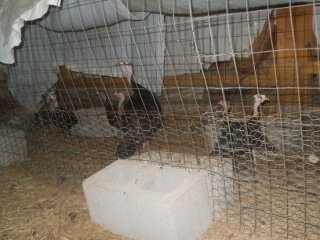 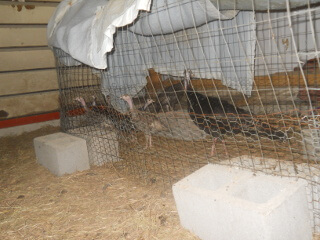 Well, that part did not go rather smoothly. I couldn’t get the end of the cage propped up with the blankets on, so I removed some of the blankets, and Tasha, who is skittish anyway, just seemed to panic and flew up and out of the caged area and out the north door. Arg! So, we tried to shoo out the turklets so they would stay with her, and they started doing the same thing, flying up and off walls, going all over the barn, etc.

Soon, we were able to get them all out the north door. Mommy was kind of running up the walk path up to the goat fields with a couple of turklets behind her, so we tried to get the other ones to follow, and everyone started scattering. It was quite a mess. We were trying to get all the yougin’s to stay with mama, but looking back, we probably should have just let them be in the cage, as shooing them out caused a lot of trouble.

Throughout the day, 2 of the turklets made it back, hanging around the other turklet group or wherever, and Tasha came back too. And by the end of the day, only those 2 were to be found. Sigh.

In the evening, one I believe went into the barn, the other sat down next to the generator box, and so we got it and put it in the barn. We were praying God might grant more come back, or that we would find them, or that He might grant their safety over night.

Later, as Sue was walking Brodey our dog, she had an inkling to take a bit of a different path, and lo and behold, she discovered 3 sat down next to the orchard gate! Wow, what a gift from God! So, we used a fishing net with them, and got them into the barn. So now, 5 were in the barn, and 2 still missing. And that was it for that day.

The next day, I was walking around, looking around for the missing ones, and walked by the hill of dirt that was the dirt dug out for the root cellar, and lo and behold, God granted I just happen to walk by one and see it sat down in the grass! Wow, another gift out of nowhere! So, we netted it and put it in the barn in the goat stall area where the other 5 were still hanging out.

And in the Lord’s perfect will, #7 never came back. We don’t know if it just crouched down and died, or just ran off, but that was it. But, God didn’t have to grant any of them to come back, and we thank Him for what He did grant, and His answers to prayer!

Today, the 6 are still going strong, and spending their days out and roaming the homestead. Mama never rejoined them at all, and within the last couple of days, she had gone missing. She had slightly injured her wing when she tried to fly out on that mayhem day a couple of weeks ago, but I had a hard time believing it killed her now. However, last night she made an appearance to take a dirt bath and eat some, so we know she’s still alive, and it looks like she might be nesting again. We do pray God grant her safety out there, if He might. Maybe we’ll be able to find her and migrate her into the brooder barn.

And now, without further ado, here’s their video, which includes the release day, and the followups with finding turklets, and the 6 eventually starting to venture out of the barn:

We recognize that nothing we have is our own, and that all things are the Lord’s to do with as He pleases. We thank Him for graciously granting the turkey chicks He has, and we pray we never murmur, and that He glorify Himself through them in some way, and always through us in some way.