After learning about the doctrines of grace and God’s sovereignty, I believed I understood about God’s perfect will in every circumstance. But I have since discovered that while I may have on my lips that I trust God, whether I have a true faith or not and a true one in the heart might be something else.

After we moved our chickens into our chicken tractor, during the first Spring with them all there (Spring 2006), one of our hens went broody; and in the end she hatched out 5 chicks: one died young, getting her head caught up in chicken wire; one had leg problems and couldn’t really walk and was killed by something (a critter perhaps?); and 3 survived: one rooster and two hens.

As they grew, they became very familiar with us, and us with them, as evidenced by this un-staged picture: 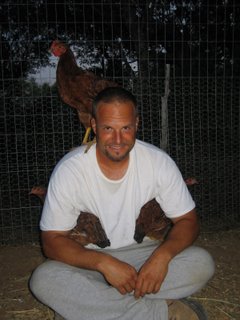 They would hop in my lap and sit down under my spread out arms, or climb on my shoulders, all without any coaxing. This endeared them to me, even more than they already were, being that we had known and taken care of them from the day they were hatched. We named the rooster “Russell” (based on what he would do early in the morning as a rooster — think movie actors; that’s Russell on my shoulders in the picture above), and the hens were just “2” and “3”. All of this helped feed some carnal affections in me, which I hope to discuss in a future “Digest”.

Anyway, Sue & I hadn’t moved up to our section of the land yet, and so we would have to walk up and check on our chickens during the day to make sure they had water, etc. One Lord’s Day after fellowship time, after walking up I noticed feathers strewn all over next to the fence line. I tracked them visually into the woods, and then to Russell, lying still, partially eaten. I exclaimed with an “Oh no!”; and when I did, a critter having Russell for dinner, which I hadn’t seen, flew behind a tree. I scrambled to find a place in the fence to jump over so as to run back there, but then the flying critter flew into the air and away.

I got to Russell, and he was indeed gone. Immediately the wheels of my mind started turning. Sue soon joined me, and I told and showed her what had happened.

And then the ugly truth came spewing forth, verbally to Sue: What was God doing (which if asked in honesty to learn isn’t necessarily bad, but that’s not how I meant it)? How can we have food from our chickens through perpetuation if He’s going to take them? Why doesn’t He just take them all right now and get it over with?

Yes, it was that bad. All the things I claimed about understanding and believing in God’s sovereignty were nowhere to be found. The heart had spoken.

Well, I believe it was an hour or two later, by God’s graces and mercies, I came to myself (cf Luke 15:17) and realized what I had done; and I found out by that test that day what was apparently the real situation in my heart: my grade in Faith was an “F”.

I was devastated and distraught. I had betrayed God, and as head of my family had done so in front my wife. Where was the faith I claimed to have, especially given such a relatively small incident? I was evidently found wanting (lacking).

However, the Lord graciously granted that I begin to seek from Him His forgiveness, and seek from Him a granting of repentance and a true faith in Him. I also had to seek forgiveness from my wife and admit to her my grave fault in how I had reacted.

Since then I have had time to reflect on that event. I still lament my actions that day, and I continue to ask Him for a true faith. I pray He writes this faith on my heart.

But why is knowing whether you have a true faith important? The Bible says in 2 Cor 13:5, “Examine yourselves, whether ye be in the faith; prove your own selves. Know ye not your own selves, how that Jesus Christ is in you, except ye be reprobates?“. Having a true faith is linked to having Christ! (Read the gifted expositor John Gill’s commentary on this verse). Further, Heb 11:6 says, “But without faith it is impossible to please him: for he that cometh to God must believe that he is, and that he is a rewarder of them that diligently seek him.“. And so it is of utmost importance that we know our faith condition.

Finally, how can we know if our faith be a true one? It must be tried; and so, not only am I grateful to Him for this test He granted, but I also ask that He continue to test my faith as necessary to evidence it as being a faith that has indeed come from Him. I pray these things be for His glory and my assurance, if He might grant that.

1 Pet 1:6-9 – “Wherein ye greatly rejoice, though now for a season, if need be, ye are in heaviness through manifold temptations: That the trial of your faith, being much more precious than of gold that perisheth, though it be tried with fire, might be found unto praise and honour and glory at the appearing of Jesus Christ: Whom having not seen, ye love; in whom, though now ye see him not, yet believing, ye rejoice with joy unspeakable and full of glory: Receiving the end of your faith, even the salvation of your souls.”

Little did I know when that rooster chick was born and we watched it grow, when it would sit on my shoulders, that it and its death might be one of the means that God would use to perhaps save my soul.

May God grant us in our hearts His tried and true faith, for His glory; and may we persevere in that faith until the end.