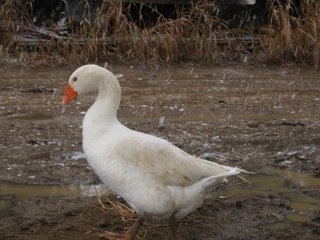 Before we go too much further with things, let us introduce to you Gary the Goose. Gary was originally the Bunkers’ goose from when they lived up north, and they brought he and his mate down with them when they moved. Gary’s mate sadly was taken out by some critter one day or night, and so Gary was left alone at the Bunker pond. Geese apparently mate for life, are protective animals, and often die soon after their mate dies. Well, Gary seemed to have some different ideas, because he appeared soon after to adopt to himself a gasoline engine powered water pump the Bunkers were using to pump water from their pond (we assume because it made noise). However, with the frequent visits from one of the young men working in Michael’s household, Gary moved on to adopting him and slowly made his way up to the Bunker cabin area, following this fellow around wherever he went.

Well, Gary started disrupting the Bunkers’ brooding hens, and Michael was not pleased with that. “Unless circumstances change…to the soup pot with you, Gary!” he declared. We thought, hey, we have room for him and he’s not much maintenance, so we offered to take him. Michael let us have him, and we moved him up to our land. 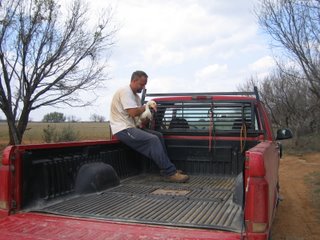 Since then, Gary has pretty much inserted himself into just about every outside aspect of our lives. He follows David around just about everywhere he goes (apparently David is Gary’s new adoptee). In fact, in order to get away, David has to have someone hold him back, drive a vehicle, or lure Gary into the barn (we’ll get to the barn in a future post, Lord willing) and then exit the back side. We have had to be careful about letting him follow us on hot days because he will start to overheat with that down comforter he’s wearing.

He sticks with David through thick and thin: 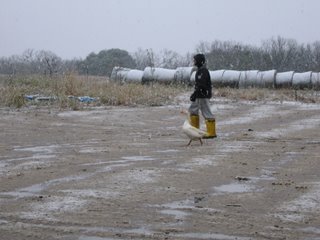 Sometimes David will walk him down to our pond and let him swim around and “freshen up” for a while down there. He lets David know when it’s time to go by walking up to him away from the pond.

During Spring and Summer, he pretty much lives on the grasses and the like that grow naturally on the land. Otherwise, we give him chicken scratch. Also, he will let us know when the neighbors are coming by squawking away; he’s something of a pretty good watch-goose.

Gary vs. The Bucket

As you can see, he is not fond of buckets. He appears to have a problem with tools and water containers as well. Sometimes we have to put in him the chicken pen while we work to keep him at bay. We have however recently discovered that tossing him through the air away from the scene seems to snap him out of it a bit.

A Conversation with Gary

The Star of the Show

This following video was supposed to be of our new chicks:

And so there you have Gary the Goose. Keep an eye out for him in future posts, and see if you can spot him when he is in one!