Does Eat Oats, and a Kid’ll Eat Ivy Too

Dave and I had probably never even seen very many goats in our lives other than at a petting zoo here and there. And any goat cheese I had ever tasted I didn’t like at ALL! I never even ventured to taste goat milk thinking it would be horrible.

Well, since we’ve moved to Texas, we’ve obviously been more exposed to a whole new world of livestock and all kinds of farm animals. A family that lived up in Lubbock, TX who we have gotten to know had a herd of goats they milked daily. One day Dave and our neighbor Michael came back from a trip to Lubbock with some fresh goat milk and cheese in tow that the family had given them. I thought I would try a tiny bite of the cheese and sip of milk because they had graciously shared some with us. It was like nothing labeled goat cheese I had ever tasted. The cheese tasted like delicious cream cheese, and the fresh milk tasted just like cow’s milk, only better and a bit sweeter. I was hooked!

We have heard that fresh goat milk is much more compatible to the human digestive system than cow’s milk and very good for you, so we decided we might be interested in getting a dairy goat someday…… and that someday came sooner than we thought in the Fall of 2006 when our nice friends Judy (Tabletop Homestead) and her husband drove down from Oklahoma and gave Michael three goats, one of which he graciously gave to us. We got to pick Winnie: 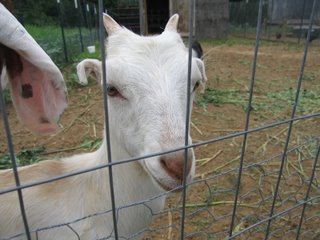 She is part LaMancha, and they are very social animals and get rather loud and whiny if they don’t have a playmate around to keep them company (play the video below at your own risk 🙂 ). She was very vocal from the beginning, even “whiny”, so we named her the closest thing to that term we could; but she has turned out to be a very friendly and hearty goat:

We then decided to go ahead and get a buck so Winnie could get pregnant and we could start milking her. So we bought our first Nubian billy goat, “Shatner” (after a famous “Billy”), in December 2007. Well, Winnie seemed to be in heat the day we brought him home; and he sure didn’t waste any time, so she had her first kid almost five months to the day after we got him. Here is Shatner: 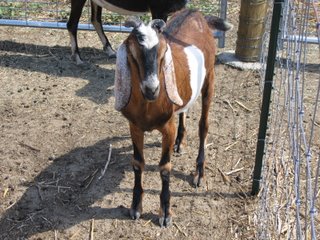 And we’d like to introduce their first kid born just two weeks ago in early June 2008! We’ve decided to call her “Minnie”: 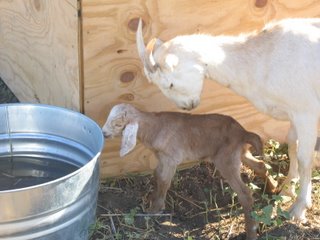 She seemed very fragile and small at first, but within a few days she was a champion nurser and running and jumping all around:

She has her mother’s lungs, too. She has a cute little bleat that will probably get much, much louder as she gets older. Oh, boy…..

Lastly, we were also able to obtain a Nubian doe. Please meet Betsy (we kept the name from her previous owners). We also considered naming her Julia because her bleat sounds a lot like you might imagine if Julia Child were a goat. Well, just take my word for it. 😉 Betsy and Shatner are roommates right now, so we think she might be getting pregnant sometime soon. Either that or we’ll have to build a third goat pen right quick for Shatner to keep him away from the does: 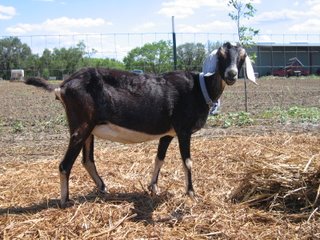 We look forward to starting to milk Winnie very soon as well as Betsy and Minnie someday. I hope to learn to make goat cheese as delicious as our friends do, among many other items, even soap.

Dave had built a shelter for each of our two goat fields to house and protect our increasing number of goats from the elements and predators. Similar to the chicken tractor, the sheds are built to be portable to adjust to changing high wind patterns and other factors. We had some high south winds recently and one of the sheds was blown completely over. Thank God none of the goats were injured. One of the sheds blew over again and Dave was a bit frustrated. In the process of putting it back in place, Dave pulled up the pallets on which the goats rest in the shed and found that a cute little rattlesnake had been in cohabitation with our goats. Dave sent me running for the shotgun; and after I returned with it, he took it out in one shot. But we realized if the goat shed had not turned over we might not have discovered the rattlesnake, another reason to never question the circumstances God allows in our lives. Thank God. We have since found a way to anchor down the sheds but have them remain portable: 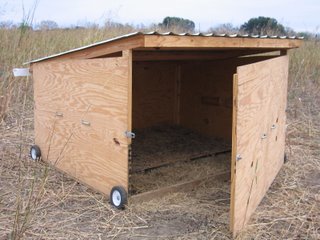 Another thing that has been interesting for us has been to watch the behavior of the goats. Winnie is our little diva who makes sure you know it’s all about her all the time. Goats are stubborn, selfish and determined much of the time, which is where we figure the term “kids” originated when referring to many children today. It reminds us that God refers to the unsaved as goats and the saved as sheep in the Bible: Matthew 25:32-33,34,41: “And before him shall be gathered all nations: and he shall separate them one from another, as a shepherd divideth his sheep from the goats: And he shall set the sheep on his right hand, but the goats on the left. Then shall the King say unto them on his right hand, Come, ye blessed of my Father, inherit the kingdom prepared for you from the foundation of the world…Then shall he say also unto them on the left hand, Depart from me, ye cursed, into everlasting fire, prepared for the devil and his angels.” Both were created, elect and unelect, to be what they are, according to God’s will: Rom 9:21: “Hath not the potter power over the clay, of the same lump to make one vessel unto honour, and another unto dishonour?” Goats are stubborn and will continue in their stubbornness, even to the end; whereas sheep, which are apparently gentle, compliant and easily trainable, will hear Christ’s voice when they are called: John 10:27: “My sheep hear my voice, and I know them, and they follow me.“. It appears that one of the reasons God, in all His wisdom, placed animals on the earth was to visually show us spiritual realities. Dave is thinking about getting some sheep someday, partially to use the wool for various items but also to have another visual reminder of God’s teachings.

We pray that, by God’s graces and mercies, we will be those who hear His voice and follow when He calls.

We are thankful for the Lord allowing us these daily observations and exposure to each of these species here on the farm as excellent reminders of the spiritual types in the Bible.