In planning our homestead, I figured we needed a barn and had some ideas as to what it might look like. I envisioned the barn to be a place to temporarily put all of our stuff that we had brought with us from California so that we wouldn’t have to pay storage anymore; I thought that our camper needed to get out of the elements to protect the investment and shield us a little from heat and wind, and so I wanted the barn to have “overhangs” big enough to cover our camper; I wanted it to be big enough so that we could use it for any other housed homesteading things we might need (a place to put hay, to have a tool bench, to be able to work on automobiles, to house animals, etc.) without having to build multiple buildings for each; I thought, since we needed it tall enough to be able to cover the camper, I would like the inside to be tall enough to allow for a loft level; and I wanted to be able to back up the tractor and our cattle trailer from the side of the “overhang” to store them and protect them from the elements as well. The way I saw it, this building would be the central and most important structure for our farming. These were the parameters for a barn with which we proceeded.

In the beginning to look at how to do this, I considered many different paths: building it ourselves from scratch, buying a steel building kit, hiring someone to build one, etc. After struggling with designs and my inabilities in the area of construction, plus in wanting to have something very sturdy and not susceptible to termites, we decided to go with a metal building. I looked into having one built, but it just seemed very expensive; and so we decided to go the steel building kit route, which would save us money in labor and also give us the opportunity to do the work ourselves. We began the search.

After much investigation, we found a supplier we liked. Through the process of ordering and working with this vendor, there were delays with design issues, and things seemed to just “come up”. We were starting to wonder what the Lord had in mind, but tried to trust Him. Lo and behold, after some time, apparently the vendor had a sale price on an I-beam construction version of the building we wanted for the same price as the original design. This would eliminate any center posts, a concept which I liked; and it was supposedly structurally better. Plus, this allowed us unlimited hight on the ends of the lean-to’s (the “overhangs”), and would guarantee enough space to allow our camper to park under one freely. Further, it would allow for the lean-to areas to be free from having walls so that the tractor and other things like that could be backed up under the lean-to from the side. This was exactly what I had in mind, and sounded like a no-brainer; and so we went with this. However, by this time we were some 9 months or more into the ordering process. Still, we wanted to trust the Lord and were thankful that the delays led to what apparently was a better situation.

During that time, Sue and I got out there to try to begin prepping the site: 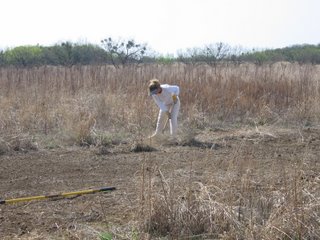 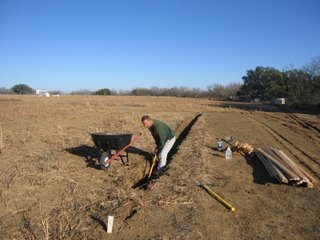 In trying to prepare for the concrete and studying about foundations, I soon discovered that doing the concrete ourselves was probably not the best way to go. I really felt that the concrete foundation was probably the most important part of the building process and needed to be done correctly, as building on a good foundation seemed imperative (Matt 7:24-25). We started to look for concrete contractors but had difficulty in finding one to help us, but we kept looking.

Finally, delivery day for the barn came, and it was on a Monday. It had snowed during the weekend, and so the delivery big-rig could not make it to our barn site. Plus, there was a miscommunication in how the materials were to be removed from the big-rig: I thought they were going to do it, and that was not the case. So, after calling forklift rental companies with no success, I called our neighbor Homer, who graciously sent one of his workers with his tractor to get the items off of the truck. We were thankful for the blessing of our neighbor’s good will and for the help of the men in the community: 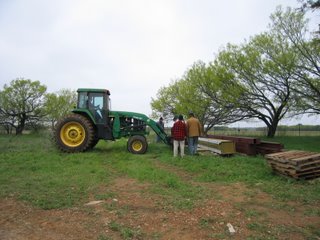 Well, in examining what was delivered, which included several approximately 42 foot steel I-beams, it started to become apparent that putting this together was not going to be that easy. We would need cranes and crane operators, lifts, etc., etc., which all started to add costs. And so, coupled with the fact that we still needed the concrete to be done, we started to look for steel building contractors.

We found a local one who would do the whole thing for what was the best price of any of the ones at whom we looked. And thus began the process…

Here is some concrete prep: 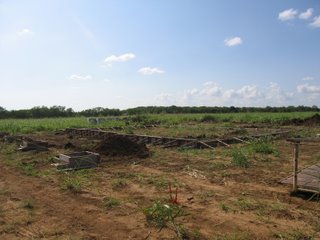 And the concrete pour: 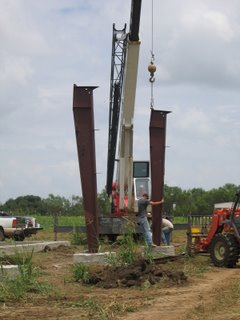 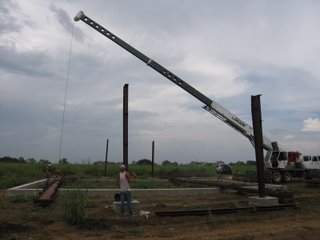 Or a jumbo Erector Set! 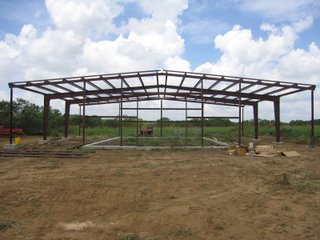 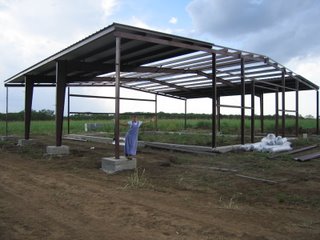 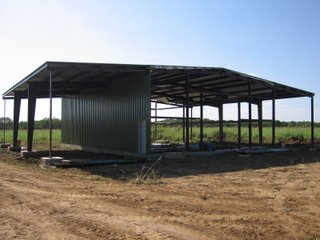 Thanks to the Lord for His provisions: Apparently, the living quarters have been established!! (look carefully) How many people get to drive their house by their own heifer calf? 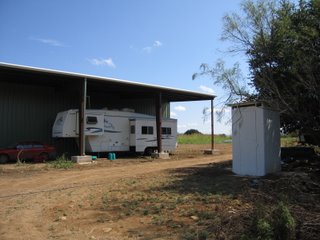 We have been thankful to be able to host gatherings here and allow folks to fellowship.

This barn process took approximately 16 1/2 months from first dirt prep to our moving. It’s interesting to see the thought patterns throughout and how each seemed to invariably lead to a subsequent decision, which in the end brought us to where we ended up; but in looking back, this might not necessarily have been the path we would have taken given what we now know. It appears that if we were to go back to one of the original plans of having someone come out and just build it, it would have ended up costing about the same, and hopefully would have taken less time and caused less headache. There were points along the way where we stepped back to reconsider our current position with the idea of cutting our losses, selling the barn kit, and starting again; but between costs and time it appeared we needed to continue as it was going. Still though, through it all, we do not want to discount in the slightest God’s perfect will in things; and so we learned not to question delays or how this all turned out, and tried to learn what else the Lord might be teaching us, including continually questioning ourselves and our motivations, in the hopes, with God’s help, that our carnal man be subdued.

We are grateful once again for the Lord’s provision, eternally, spiritually, and temporily. May we never rely on our own storehouses, but always and forever rely on His storehouse of graces and mercies.