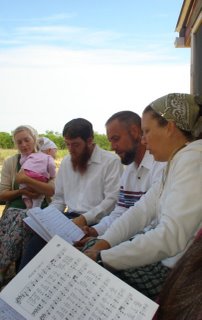 Although the work we do on the land is important, one of the main reasons we’re all here is because the Lord has graciously granted us the fellowship of like-minded brethren. While some of it is serious, some of it is not so much; and God has afforded us the opportunities for leisure-types of fellowship with each other and with some of the events and people in the local communities.

On the Lord’s Days, we meet in the morning for singing (shown in this picture to the left) of Psalms (which for us are the Psalms from a psalter we purchased here), hymns and spiritual songs (Eph 5:19; Col 3:16); and then midday we commune around the table to enjoy the Lord’s provisions together in representation of being nourished by the spiritual provisions from God. We usually meet at different peoples’ homesteads each week, but in this picture we decided to go to the park in our town for this time of fellowship: 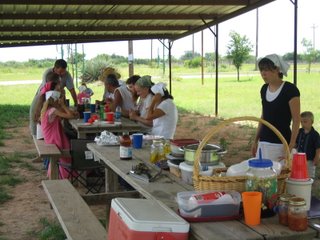 And after eating, the guys enjoyed some throwing of the horse shoes: 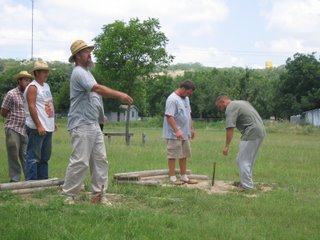 On a different day, the adults joined the children in a game of kick ball: 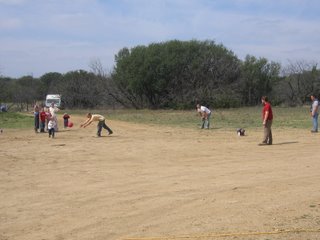 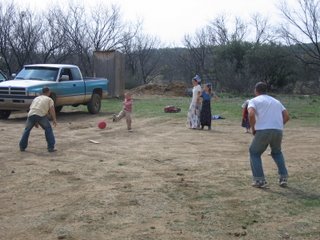 We have set aside every first Wednesday of the month to be a community work day, where we all gather to work together in fellowship around the land, either on things that benefit the community in general (like working the roads) or to assits someone who might need help with a specific project: 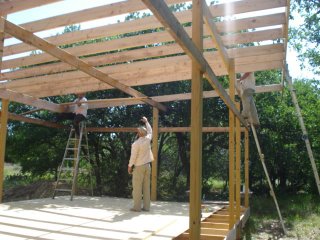 This pair looks like they’re having way too much fun for pulling fence! 🙂 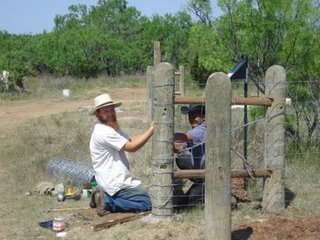 The ladies will get together during work day to help outside or to work on inside projects: 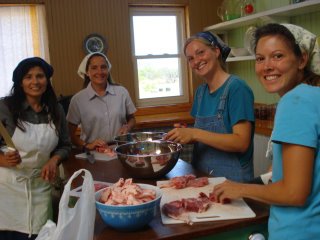 And then it’s time for some leisure together: 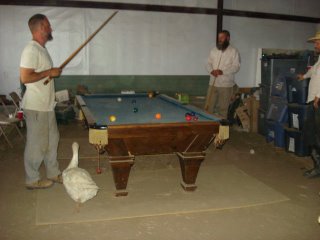 The Lord has blessed us with a godly and gifted teacher in Michael, for whom we are very thankful. In a given week, we will typically meet together as a group to be nourished by the means of grace God has graciously granted us.

The first meeting is a sermon, where Michael teaches. After an opening prayer, we sing a Psalm from memory to practice learning the psalter songs by heart, and then Michael preaches.

And the second is Saturday evenings, where we again sing Psalms from the psalter, and then have a question and answer time with Michael, which is followed by general fellowship time: 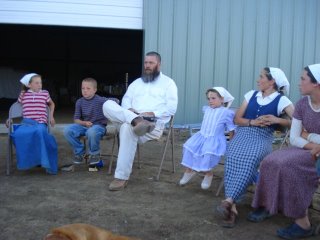 Several times since we’ve been here, the children have put together plays on various subjects (like Esther’story and Passover) and then have performed them for the community. Now, this is not cheap “community theater”; this is the real deal! We have to buy tickets, and they offer a concession stand at the performance. And it is worth it! 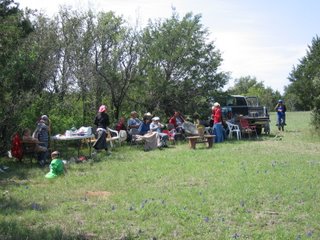 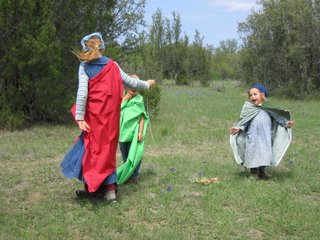 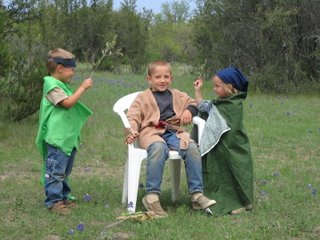 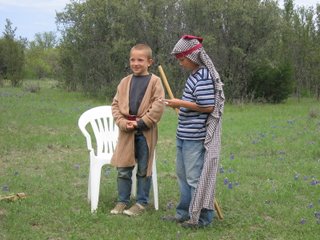 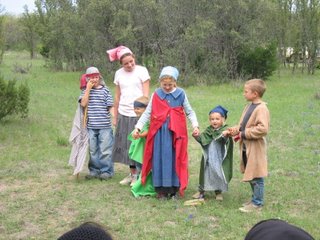 In light of trying to live a preparedness life-style, Michael thought it would be important that we experience and learn what to do if we ever were to find ourselves having to survive in a cold weather situation. Now, coming from comfortable California and comfortable city life, I have an acute aversion to being cold; and so this was not going to really live up to the “fun” part of “Fellowship and Fun”; however, after some exhortations I tried to have a good attitude about it. There’s me in the back and in black, frozen solid (or at least I thought I was): 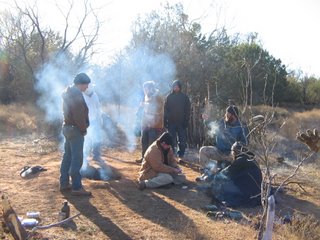 This was my shelter the first night. All I had were my clothes and a sleeping bag, no tent. It got down to 17 degrees that night. I’m pretty sure it was the coldest I’ve ever been, as my shivering kept waking me up: 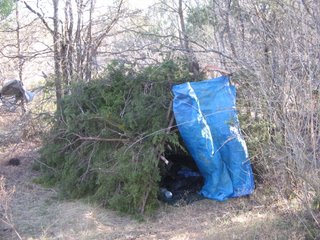 However, part of my “experience” was for me to be set up the next night in a different situation, where we made fire beds on top of which we’d sleep (actually we only made a couple of beds, but I was allowed to have one of them 🙂 ). Here’s one of the guys helping dig the bed out for me. Needless to say, that night I was quite comfy; and when I awoke the next morning, I was so warm I couldn’t tell in the slightest how cold it really was, which again was 17 degrees. It was very nice: 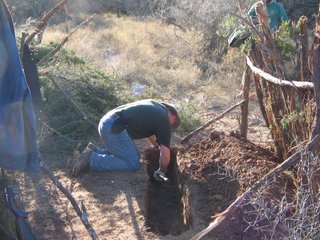 Overall we learned quite a few things. Thanks to Michael for taking the time to teach us those things.

Also, after reading a few of the slave labor camp “Gulag” books by Aleksandr Solzhenitsyn, I was thankful to not have it as bad as they did, where temperatures would get to 60 below zero; and only then were they not forced to go work.

Soon after we moved here, one of our neighbors came by and introduced himself; and he has since become a good friend of the community. His name is Homer, and he is a very nice and generous man who, after being reared locally, is retiring now out here.

Here is Robert getting to ride along while Michael’s field is being baled for hay: 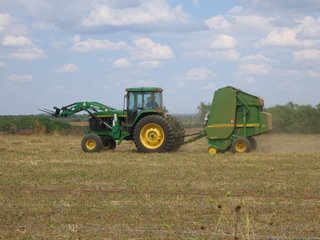 And here, Homer is giving rides on his dune buggy: 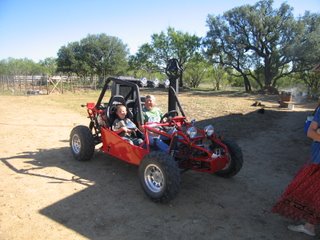 He also purchased and gave all of the Bunker children bicycles.

We pray the Lord grants him and his family salvation.

During the year, there are various community events, some of which we might attend. Here are a few to which we’ve gone.

Interestingly (and I don’t believe incidentally) in our life paths, directed by God, Sue and I both enjoy listening to and have sung in barbershop quartets; and so we have gone to the local barbershop chorus’ annual show for the last couple of years: 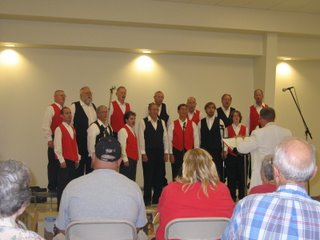 This was the Coleman rodeo from the first summer: 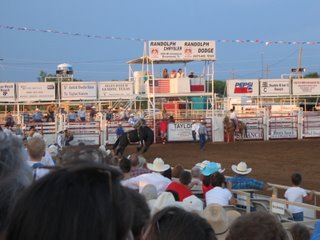 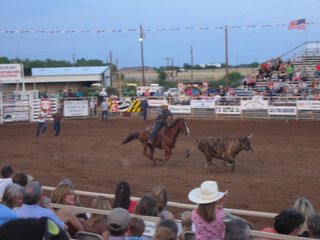 And from this year, this is the Coleman rodeo parade: 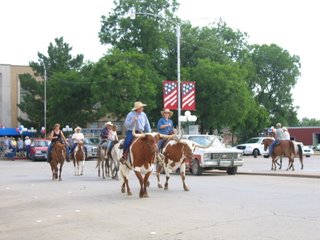 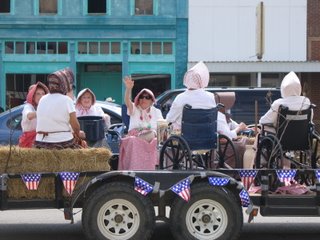 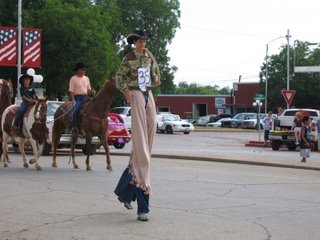 We always pray we represent the Lord well when out in the community, for His glory. May the way we live be a witness to those around us here in the world, and to the principalities and powers in the heavenly realms, as a testament to His efficacious work in the hearts of sinners and to so great a salvation. Amen.

(Thanks to Jordan and her The Ranch Weekly blog for several of these pictures!)