The Lord is gracious in allowing more homestead improvements and fellowship with the brethren, one of those for us being what we have planned to be a summer kitchen project. With me being a rookie building designer, things “ended up” being a little different than the original plan.

In including windows but desiring them to be horizontally sliding, I purchased some from the local home improvement store that were typically used as vertically sliding windows thinking I could simply spin them sideways and thus make them horizontal windows. Well, it worked ok, sort of, but not, because I discovered that, not only was there a spring line attached which is meant to help in opening the windows up against gravity, but since mine were tilted over 90 degrees, that resistance made it difficult to close them. Further, when it rained, water puddled in and leaked over the lower sliding area. Something was amiss.

So, after understanding a little more about windows, I ordered the proper, left-right sliding windows. When they had arrived, I began the replacement operation.

The biggest obstacle was that the open space I had built into the window frames was horizontally too short for the new windows. However, in thanks to God for how I originally constructed it and for the idea, I was able to just cut out with a reciprocating saw one of the side 2x4s of the window frame and replace it with a 1×4, thus allowing for the needed space and therefore resolving that, quite possibly complicated, issue.

When replacing the first window, which I had silicone-caulked originally, I thought I would sort of “work” the window loose. When I did that, I apparently twisted the window beyond capacity, and the outer pane of glass shattered. Sigh, again. Ok, so then, when installing the new window, after setting it in the window frame, as I was trying to screw it in place, the top of it fell forward, hitting my head (which took off a nickel-sized piece of skin), and the screw that I had been planning to use to secure it was now found to be buried in the screening of the new window. Sigh, again, again.

Anyway, I learned very quickly that what I had been doing was apparently not, at a minimum, the best way to proceed. I figured then that I should spend more time prying the old windows’ edges from the caulking before trying to remove them. Wonder of wonders, this worked much better. 🙂

And so with all of that, here are a couple of pictures of where we are with the summer kitchen, which includes screen doors, hopefully allowing maximum ventilation: 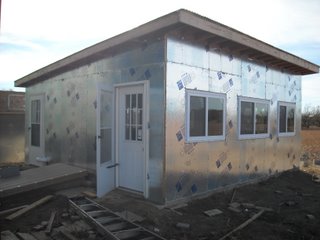 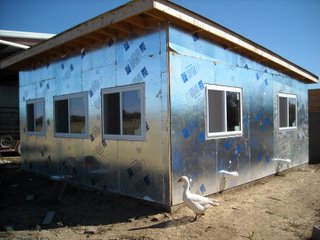 It has been a bit disheartening and sometimes frustrating, but during these situations hopefully the Lord is graciously granting us more meekness (Part 1, Part 2) and contentment, which are some of the graces for which we try to daily pray; and difficult times certainly offer the opportunity to examine ourselves (especially right at the moment) and then continue to seek Him for His graces.

We are ever grateful to God for His provisions, spiritual and temporal.