Gary the Gander Gets Gigi the Goose 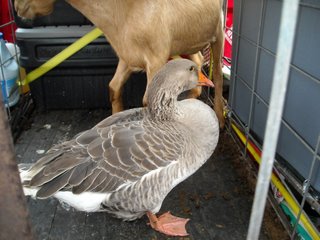 When the offer from Mrs. Judy came for Gary to have a potential mate, as much as it is fun to have him hang around me, I figured it would be great if he could have his own goose; and so, we accepted her offer of bringing one down during this last Fall’s Ranchfest.

At first, we didn’t know what to name her. But I kept calling her “Girlie Goose”, because, well, she sort of is. That led to us thinking about the first initials of that name; and so, we decided to call her Gigi, which also sounds nice with Gary’s name :).

Here is a video of their introduction and other times together. At one point on intro day, they went off into the woods together; and so we had to chaperone them back. The video ends with our nightly walk back to the barn where they spend the night:

This video has Gary bringing me back from work so he can show off for and try to impress his “lady”:

While Gary still follows me around if I am in the area; all of the rest of time, he sits with Gigi, mostly next to the goat pens. I am hoping he makes the switch to her at some point to make her his mate. Mrs. Judy said perhaps this might happen during her “cycle”, perhaps in Spring.

There have been signs of her wanting to be around him as well, shown in a couple of ways. One has been what seems like her sometimes squawking when Gary is not visible to her. Another has been that she is often hesitant to come into the barn at night unless she knows Gary is already in there. Gary will squawk at someone making a coughing noise; and sometimes when she is undecided about whether to enter the barn or not, I will fake-cough enough to get him to squawk several times; and she will turn from where she is going and then come into the barn.

We’re thankful to Mrs. Judy for giving us Gigi, and to the Lord for granting Gary hopefully a mate (even though I’ll miss his company 🙂 ).