Recently, one of our hens started walking upright like a waddling penguin instead of the horizontal way chickens typically walk. I thought one of our chickens might have had something like this in the past; and so in this instance, I tried to do a little research on the Internet. I discovered that there is a condition called peritonitis, which in general is a swelling of the abdomen; and in chickens, it can be caused by a yolk missing the “funnel” (called the infundibulum) that “catches” them as they move from the ovary to the oviduct. They fall into the abdomen, which causes the peritonitis, and a build up of fluid in the area. Thus, the condition is called egg yoke peritonitis; and there are two kinds: sterile, where bacteria hasn’t developed in the swollen area, and the chicken still has an appetite and doesn’t die quickly; and septic, which is the opposite.

Besides our chicken not having a problem eating (which basically required that we lift food up to her), I examined her abdomen; and it was much like a water balloon; and so I suspected we had our diagnosis. Here are a couple of pictures showing her condition. At this point, she had one foot back and would sit on the other foot, and all she was able to do was slowly scoot around in a circle (we kept her isolated in our mini chicken tractor, to keep her from being picked on or hurt by the other chickens, which they will do to weak ones): 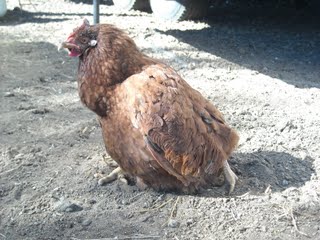 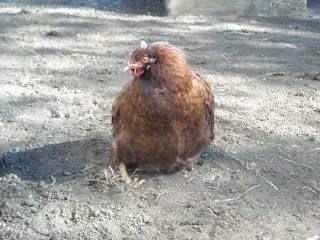 But then, with the problem identified, what to do about it. Some of the articles I read talked about draining the abdomen with a catheter, but that seemed pretty complex and involved. I did find a video though, which shows a person draining a chicken with peritonitis using just a needle.

It so happened that some friends of ours had just given us some large syringes and needles a few days before; and so, I decided to “operate.” The needle I chose to use was 1/2″ long and 1/16″ in outside diameter. Here is a photo summary of the procedure. I made very sure that everything, from the syringe, to the needle, to my hands, were as sterile as could be, including cleaning the syringe and wiping it with, bathing the needle in, and wiping my hands with rubbing alcohol.

Here I’m just getting her into position: 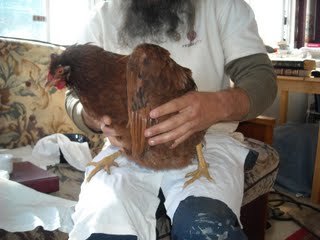 And then I flipped her onto her back: 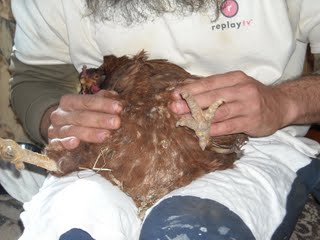 I cut away the feathers around the area where I was planning to insert the needle:

And then I did so. I tried going at an angle parallel to the skin as much as possible to avoid puncturing her internal organs, but couldn’t seem to pull anything out with the syringe; so I found I needed to insert the needle at a steeper angle. Once I did, the fluid extracted pretty easily; and I was glad it was clear and didn’t have pus in it: 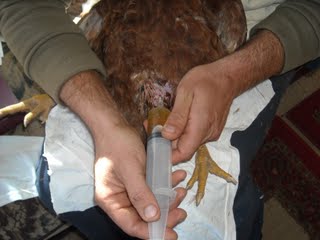 I pulled about 40ccs worth before stopping. One of the articles I read said to only pull half of the fluid out because the loss of too much could cause shock: 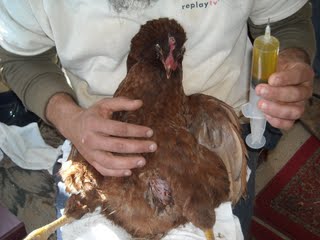 When we were done with the draining using the syringe, the hole continued to leak fluid; and over night, she lost quite a bit more. However, after it was all done, first, when I would pick her up, she was noticeably lighter than before; and second, she was able to bend over and eat and drink by herself somewhat, and was actually walking around. This went on for a few days, but her underbelly seemed to start to grow again. I decided to try the procedure again, and was able to pull out around 70cc. I tried going in again a couple more times, but couldn’t seem to find any more fluid — I tried keeping the needle at a flatter angle again, because there wasn’t nearly as much puffiness to her abdomen as before, and I believe I might not have been getting past the fat layer as it was basically impossible to extract anything out. However, I didn’t want to puncture any organs; and so I stopped; but it ended up that at least one of the needle holes continued to leak similarly to first time we drained her.

The next day she was doing much better, and was almost walking around like a normal chicken. Here is a video of her (the “other one [that] was only a still frame” that I mention refers to the fact that the “before” pictures were only still photos — the ones shown above):

A couple of days later, I took a pair of toe nail clippers and clipped the tip of her beak as it had started to grow past what looked to be normal as compared to the other chickens. My guess was that it had grown more since she hadn’t really been able to use her beak normally for some time.

I don’t know what will further happen with this situation, but it was neat to see her act like a chicken again and be able to “do chicken things.” It does seem that the liquid starts to collect in her abdomen again as the days go by, and perhaps we’ll have to continue to try draining it. However, we are thankful the Lord granted us this opportunity to learn about and care for the chickens, and that I didn’t apparently infect her myself when performing the procedure, nor poke her internal organs; and hopefully, if God is willing, she will once again become a productive member of the flock.