For our breeding scheme this year, we previously discussed our separating out our older does to be with our main buck Shatner, and the younger does, his female offspring, to be with Eastwood, a goat we traded one of our triplet bucks for. Well, there have been a couple of updates: first, Eastwood died during the Winter; so we borrowed a buck from our neighbor. He’s apparently pure Spanish, and we call him John Buck (think what you might call an unknown female goat 🙂 ) : 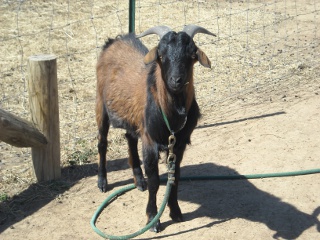 We had put the bucks with our does in the beginning of November so they would give birth no earlier than April, where they should be mostly out of the cold. Well, Sue was out near the goats the other day, and she heard a very young sounding bleat. Umm…huh? She went to see what was going on, and lo and behold, our doe Pammy had given birth to twins! While quite surprising, we were both very thankful to find out God had granted us two new goats — a male and a female. We decided to call them George and Gracie, and here is your introduction to them: 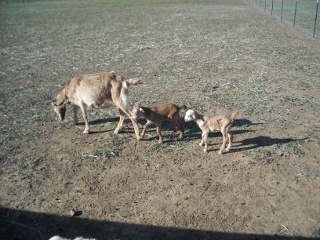 And here is a video:

As I briefly mentioned in the video, last year, when Winnie had her triplet bucks, the middle one, Porthos, seemed to often have physical problems, from pink eye to swollen front knees. And he was smaller than his brothers, and so we kept him with Winnie much longer than we did the others, so he could continue to have her milk. Well, apparently we kept him in too long, as nearest we can figure, he is the father of the new kids. Porthos has grown up to be about as big has his younger brother now, and seems to have also matured normally. 🙂 Even though this is a possible situation of some in-breeding, which we were trying to avoid, since it’s Pammy it’s not too bad as the worst Porthos might be is Pammy’s nephew; with Betsy, she’s of a whole different line, so if Porthos got to her as well, it’s fine. However, he may have gotten to his mom, Winnie; we’re hoping not, but I guess we’ll have to see what happens. And now we know better for the future.

We are grateful for the Lord, in His graces and mercies, granting us these new provisions; and we pray that He might grant they be productive members of the herd, according to His will.