I was looking out our camper this last week into one of our fields, and saw something black behind one of the cows. I wondered what it was (and thought maybe it was a plastic bag…or maybe even a new calf!). Sue and I slowly made our way toward it, still trying to make out what it was that was behind her. Well, we got within 30 feet or so, and finally realized indeed it was a new calf, and that the cow was Rosa, one of ours. We hadn’t noticed Rosa showing signs of immanently giving birth, but there it was.

And so, after discovering it to be a little bull calf, and continuing with our Spanish naming convention, Sue was looking in Spanish for things black, and looked up the word “crow.” And with that, we decided to name him Cuervo: 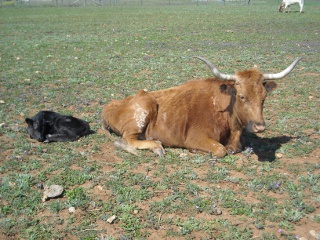 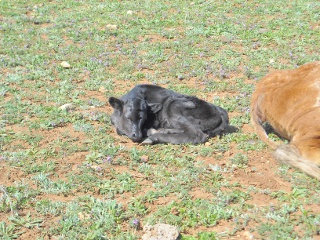 The larger bull we show in the video was not the sire, even though he has the same colorings. We think one of the other younger bulls, which has black and white colorings, and is penned away elsewhere right now, but happened to get out for a few days some time ago (9 months perhaps?) might have gotten to Rosa; although there was another bull, a grullo (grey) one, running with the herd at the time, but he would have had to have gotten to Rosa right around the time he was removed from the herd; and even then, Rosa was a few days late in delivering beyond that. At any rate, I guess we’ll have to see how Cuervo’s colors end up, although evidence is pointing to the younger black and white bull.

Also, even though in the video he isn’t doing much, and he typically doesn’t move around a lot during the warmer days that have been occurring lately; but at night, he’s literally running circles around his mother.

We are thankful to the Lord for granting this provision of the calf, and we pray for God’s continued guidance with the animals.