Well, once again, it’s that time of year — time to try to grow something for us to eat!

I learned in last year’s garden to wait until mid April to plant because of the potential for late freezes; and so, we did wait. When it came to soil preparation, since we added the vermiculite, peat moss and compost in raised beds last year, all we needed to do this year was add compost, which we did. We hope to be able to develop our own compost someday; but until then, we bought some cotton burr compost and mixed it into the top soil layer in the beds.

And here’s where things are at currently. There are peppers, tomatoes, carrots, squash, zucchini and green beans — basically the same as last year, mostly because it all grew really well. We decided against okra because you have to pick them when they’re three or four inches long or they get very fibrous; and with all of the other vegetables, we just weren’t able to keep up with them properly:

In this picture, the two small tomato plants are plants I found growing in another raised bed that apparently grew on their own from seed or maybe even tomatoes that had fallen off the plants from last year: 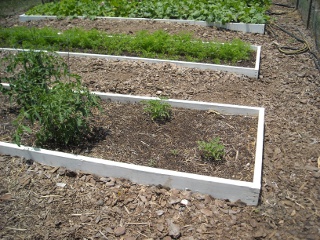 And these bell peppers we started from seed in the raised bed: 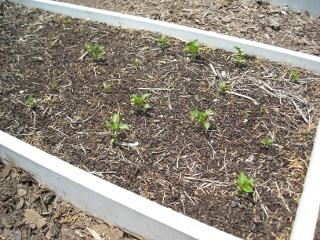 And finally, these are still last years’s onions! 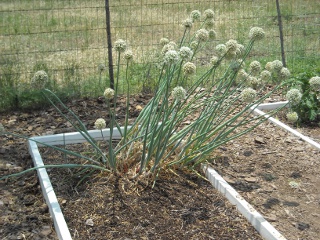 We thank the Lord for bringing us through the Winter into the time of Spring, the time of life, and the opportunity to plant this year; and we pray for His provisions of rain, water and sustenance from the plants, according to His will.

Graciously again, God has granted another calf to be born to one of our cows. This time it’s Rosalinda (half sister of the cow in the previous blog post), and she had a little bull calf. As you can see, he’s sort of chocolate brown; and a bear is brown; so we decided to call him Bernardo, which in Spanish means “bold as a bear.”

And here he is with his mother: 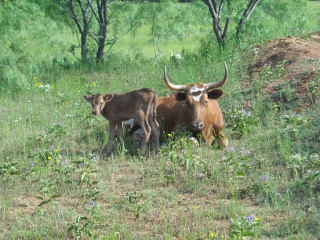 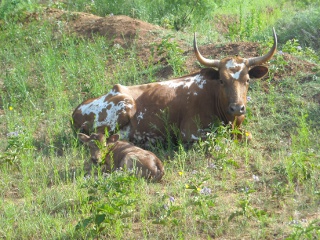 And here’s a quick video:

As always, we are grateful to the Lord for granting another healthy birth and increase of the herd.

The Lord has graciously granted another calf, a little heifer, to one of our other heifers Rociada, which means this is her first calf! Rociada comes from one of our cows Rosa; and in continuing with the naming tradition of Rosa and Spanish names for our Longhorns, we decided to name this new calf after a type of old garden rose called Alba that has white and pink blossoms, which is also the Spanish name that means “dawn.”

And so, here is our new heifer Alba: 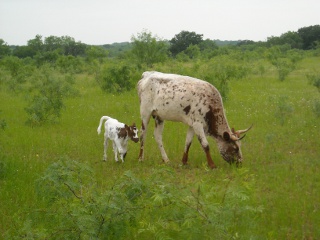 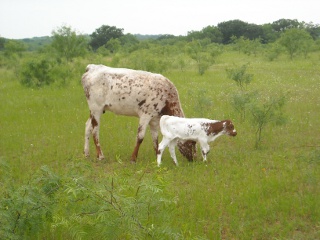 We thank God once again for this provision of the new calf; and we pray she is productive for ourselves and others, according to God’s will.

David’s Digest: Lest Any Man Should Boast

If you consider yourself a Christian, and that you made a free-will decision to have faith in God…

Assuming that making a decision to believe in Christ is a better one than rejecting Him, what about you allowed you to make that better decision? It had to be something about you that caused you to choose that way. And it had to be something better than the person choosing against. Was it your better intelligence? Your better analytic capabilities? Your better ability to understand things, even though you both heard the same gospel message? Something had to be better about you…what was it?

That’s why the Bible declares that God’s sovereign will is the cause of the gracious gifts of faith and belief in Him, not a person’s “free will” — lest any man should boast (of himself over the glory that is only due God):

John 6:29 – “Jesus answered and said unto them, This is the work of God, that ye believe on him whom he hath sent.“

John 6:44 – “No man can come to me, except the Father which hath sent me draw him: and I will raise him up at the last day.“

John 6:65 – “And he said, Therefore said I unto you, that no man can come unto me, except it were given unto him of my Father.“

Phil 1:29 – “For unto you it is given in the behalf of Christ, not only to believe on him, but also to suffer for his sake;“

Jam 1:18 – “Of his own will begat he us with the word of truth, that we should be a kind of firstfruits of his creatures.“

The Lord has graciously granted us a new little heifer calf! She got easily spooked one day, and ended up in a former cellar hole next to a shack that came with the property. At some point during that escapade, she injured her hoof; and it was bleeding. However, after several days, it seems she is getting around fine; and is even running around in the evenings.

Please say hello to Rafaela, which in Spanish means “healed of God”: 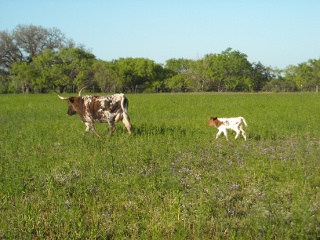 And here is a quick video:

We again thank God for His provisions, spiritual and temporal, and for His granting a heifer calf and increasing the herd.

And again, God graciously granted two more kids to be born to one of our nannies. This time it’s Winnie, with Shatner being the sire; and they produced two little bucks.

Please say hello to Bert (on the left) and Ernie (on the right):

And here’s their moving picture (with not a lot of movement 🙂 ). This was about a week ago. Also, by this time, we had 17 goats total:

We thought we’d also include a video of all the goat kids being more active. I mention they sit around all day; actually, they sort of only do that for the first several days, but then are old enough to keep up eating with the herd throughout the day, although they are more active in the morning and at night. The video’s a little long, but there are some fun parts throughout it. And, you’ll get to see how Bert and Ernie’s faces look almost exactly alike:

As always, we are, and may we ever be, thankful to the Lord for all of His provisions; and we pray He grant us wisdom and guidance in the care and use of these animals, for His glory.