Recently, the Bunkers captured a garbage bandit in a live trap they had set. The culprit was an orange tabby cat, a male. He ended up being quite friendly, and some of their children wanted to keep him, but the decision was made against that, and he was offered to us actually.

Sue had been wanting a cat for some time, but we really need things to have utility value around here. We have had some mice problems in our barn; and so, I decided that he could be beneficial to have for our barn; and I could do a little something for Sue as well, especially given how friendly he seemed.

On March 17 of each year, we have a tradition around here of having an orange party, with orange being the somewhat official color of Protestants, in protest of the Roman Catholic St. Patrick’s Day and their green color. Some time ago, Protestants in Northern Ireland and Scotland took the color orange in honor of William the III, also known as William of Orange, and for his stands against the Roman Catholics, especially on this day, July 12, where he defeated the antichrist Roman Catholic forces at the Battle of the Boyne (see the “Antichrist” section on our “Soul Info” page regarding our belief that the Pope and Roman Catholic Church are the Antichrist and religious system of Antichrist).

And so, since orange, being the color of Protestants, was derived from William of Orange; and since our cat is also “of orange” — of orange color, that is — we decided to call him William.

Here are some pictures:

Cats apparently like to lay around a lot it seems, especially during the day — at least, this one does: 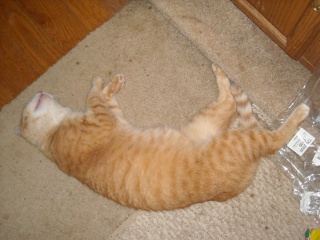 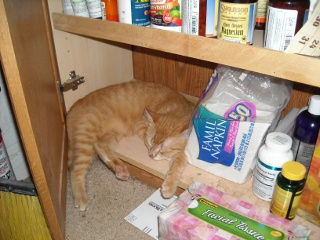 Also, I must say that he is the friendliest animal I think I’ve ever been around. We keep him inside with us during the day, unless he wants to cruise around outside; and he really likes to just hang around people: 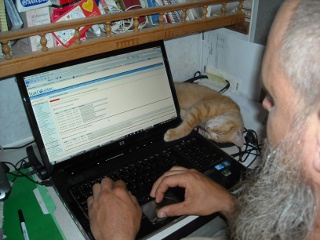 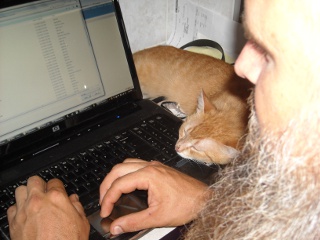 But, here he is earning his keep:

William’s fun to have around; and he seems to be doing his job, at least to some degree; and he doesn’t cost too much to maintain.

We’re thankful to the Lord for granting us this living mouse catcher, and we pray God grant that William fulfill his duties. We’re thankful for this friendly gift of creation, but we pray the Lord grant us a continued proper perspective on animals without sinning by having inordinate affections. Also, we stand with our Protestant brethren throughout time who have been faithful to Christ against Antichrist, even to death: see Foxe’s Book of Martyrs.