A Mulching We Will Go

One thing about living out here in untamed territory is that everything is on the dirt. This makes for dirty clothes, dirty belongings…dirty everything. And then when it rains…well, you know the equation: dirt + water = mud.

Dealing with the mud around here has been an interesting experience. It gets everywhere (like the dirt); we have to park cars up at the front of the land in advance of rain to be able to go to town; and you get to slog around in it sometimes for an extended period, which actually isn’t so easy for days on end. Anyway, these things in the end can be a means of revealing a lack of graces in our lives, which should cause us to pray on bended knee for forgiveness and for the proper graces of patience, contentment, etc.

I wouldn’t have it any other way. 🙂

However, from a practical standpoint, there are some things that can be done to help with problems that occur from things like dealing with mud. One thing I did was add gutters to our Summer kitchen and cistern, which has helped keep water from collecting around them — water which sometimes leaked into the stairway of our root cellar. Also, our barn’s North lean-to is actually slanted slightly uphill; and so, when it rained heavily, especially from the North, the whole North lean-to area would flood, which would also leach under the barn’s concrete footer, soaking the floor near the footer on the inside of the barn. Well, I figured this could eventually cause problems with those areas of the foundation. But what to do?

Mr. Bunker some time ago came up with the idea of hauling in free mulch that was available from a local town’s landfill, and using it for any pathways and areas where people needed to walk in the rain. This was a great idea, as it ended up working very well for him.

And so, I was able to finally transport some loads here (which sadly weren’t quite free anymore, but not too expensive) to begin filling in the North lean-to area, and around the Summer kitchen and root cellar: 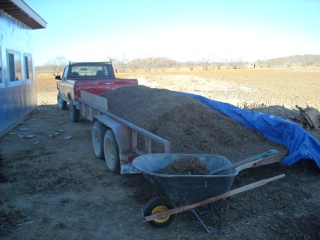 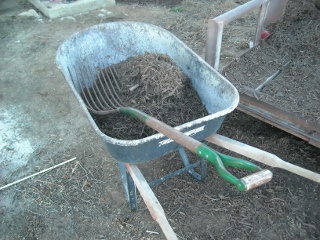 And here are some pictures of the coverage. This is the beginnings of laying it out: 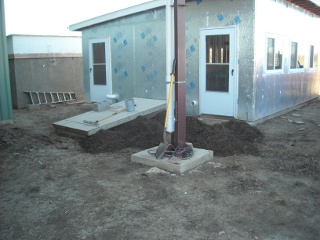 Here is the mulch around the root cellar: 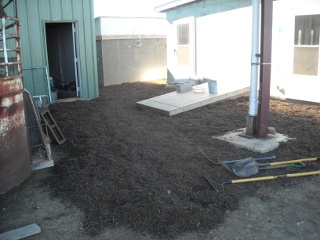 And between the cistern and Summer kitchen: 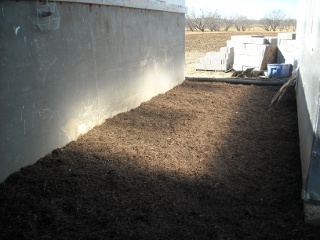 With the first flatbed trailer full, we filled most of what you’ve already seen, and started in on the North side lean-to: 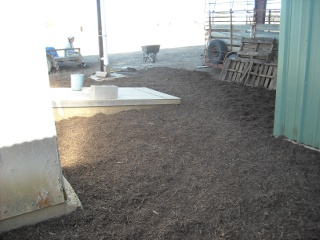 With two more loads, we were able to complete the whole area under the overhang: 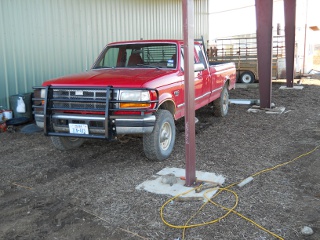 It has worked out really well for us too — we can walk around those areas now, even when it is raining; the root cellar leaking is much better, as is the inside of the barn floor.

We’re thankful to the Lord for granting this idea, and for the provisions for the mulch and help in continuing to improve the homestead.