It Was a Little Chilly Outside

So, we usually try to get a blog post out quicker than this; but this last week has been interesting. We just went through probably the coldest weather we’ve experienced since moving out here 5 1/2 years ago. It was a doozy, for us anyway. It was originally supposed to only last a couple of days, but it stretched out to three full days with temperatures between the upper single digits to lower 20s, with only on day four us hovering around the freezing mark. Also, it was breezy or windy most of the time, and we had rain right before and snow during; and with the winds, the wind chills got to below zero. After our cold weather training trip (see the “Preparation and Education” section of that link) of a few years ago, in preparation for any future trips, I obtained some extreme cold-weather clothing, like polypropylene long underwear, socks, glove inserts and balaclava, and some lined coveralls. Those polypropylene accouterments are the best, and have really helped Sue and me.

Now, while we’ve been able to figure out some of our own cold-weather clothing issues, some of our animals, and the situation we have available for them, aren’t really set up for these kinds of temperatures. We lost a goat in the cold last year; and we currently have just a few-month old chicks, which we’ve already lost 2-3 because of me exposing them to 20-degree weather — I thought because they had their feathers they were ok, but apparently not with that much cold. And so, we spent all day Monday preparing for the arctic front that was due to come in that night.

Before I get into the other animals, I have a little story. Two and a half weeks before the cold front, we found our most traditional-looking, original breed Longhorn cow, Amistosa, laying down on the left-over hay on our upper field, where we have been putting their hay bales, and not getting up. The next morning she was still there, and when I brought out range cubes to see if she would come and get some, given she’s a range-cube hog, she didn’t get up; and then I figured something was wrong. Soon after, she did stand up, but was very evidently hurt in her left front leg, as she almost fell forward into the ground just trying to stand up. We watched her limp around, and saw she was at least able to move, but then found her 60-70 yards away laying down again, this time on the outside of the berm that makes up our pond. I was able to get her to stand up, and then again later that night, with the help of several of the guys. We tried to get her to move with the herd as they were heading toward our upper field again, so that she would be with the herd and nearer us, thus hopefully providing her protection from critters, and away from the pond so she wouldn’t stumble in and drown. I wanted to keep watching her that evening, and instead of finding her with the herd, she had headed the other direction, and was in a grove of trees. I brought her some range cubes, and left them, and came back later, only to find her not there. I looked around, and she had moved to a little bit more of a secluded place, between a large juniper tree and some over-growth. And she had laid down again. I tried getting her up, and even with the guys again, but she wouldn’t stand up. Well, I figured she knew best where to place herself (as part of her God-granted and sovereignly-directed instinct); and so, we started bringing her hay and water.

After several days of this, with her only switching her body from side to side at various times of the day, I decided to see if the vet would come out to look at her. Like I said, she is probably our best looking cow as far as Longhorn traits, and it was very possible she was pregnant. He did come out, tried to get her to stand up, examined her, etc. To make a long story short, he decided she probably needed some better mineral nourishment, given the grass on the land was eaten down, that she was indeed about four months pregnant, and that it was most likely she wasn’t going to get up again, as typically they don’t. He also suggested some feed, and just suggested we try to keep her going, if we wanted. With that information, I had to decide if we were going to put more money into her, or just butcher her, and then basically lose the calf too. Given there was hope, I decided to keep going.

And so, we bought the feed, fed her with that, and continued with the hay and water and cleaning up after her. We also bought some loose minerals in case the rest of the herd was suffering from lack of minerals, but apparently they were generally ok, as they really didn’t spend much time eating the minerals (all of which I believe goes to show the hardiness of the original-breed Longhorns, even with very little native food).

Fast-forward to Sabbath day, 15 days after the last time she walked, and 3 days before the arctic front was due. I had previously asked some of our Longhorn experts (who figured she was just injured and not suffering from malnutrition), and I had asked our local feed-store guys if they had heard of our situation before, and they had but indicated 99% of the time they don’t get up. Well, I figured then that I needed to start trying every time I was around her to get her up, because the longer she stayed down, the worse she was going to get. That midday, I tried to get her up, and she stood up! I thanked the Lord, and called for Sue, who was pretty excited and thankful when she saw her. I coaxed Ami to walk to get the food, and she did, but she was very wobbly, and soon laid down again, although her left leg didn’t seem to be giving her trouble. I also got her up again that evening; and then next day, after giving her a taste of the food, and taking it about five feet away, she decided to get up on her own, and go to the food! Thanks to God again!

Step forward to that Monday before the storm. I was trying to think of ways we were going to be able to protect her from the wind and cold, but before I really had to put a plan into action, she was gone! I found her in some other thickets a little ways away, laying down; and when I went to try to find her with some food that night, she ended up finding me. At this point, she was sort of on her own now as far as the weather; and so we prayed for the best.

Again, to shorten things, the next day in the snow, I found her across the property standing; and I think by the next day, she was on the front field at the hay bale eating with the rest of the cows.

Here she is after the storm, waiting for some feed: 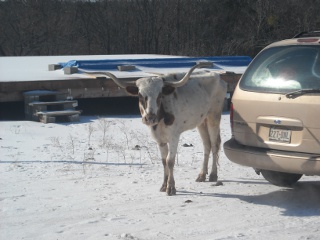 And so, we are most thankful to the Lord for granting her healing, that we didn’t lose her or the calf, and that the Lord granted her to be mobile before the freezing weather. God is most gracious and merciful.

Arctic Weather Around the Farm

Now, God IS most gracious and merciful, regardless of what happens; and it’s more evidence of His graces and mercies when He reveals those attributes in some form of grace and mercy He extends us. And He granted many during this storm.

Here are some of the things we did in trying to keep the animals going. But even though we did these things, the outcome was of course always in God’s hands:

One thing that didn’t go so well for us was the roof-washer parts of our catch water system from the barn that feeds the cistern. With the rain that fell, and the quick freezing temperatures, and me not being quicker on the draw, the water in the roof-washer pipes froze, and split them all apart. Here are some pictures: 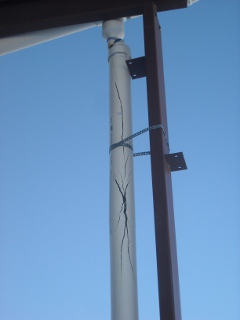 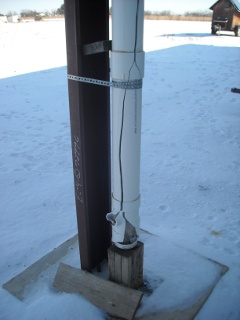 One of our other roof washers expanded and popped connectors out, but it survived it seems because they weren’t all glued. I think I may try a similar strategy when I put together the new roof washer pipes next time, Lord willing.

We did, however, cover the cistern spigots with blankets, which allowed us to retrieve water from the cistern, even with the temperatures being what they were. These spigots also face South, into the Sun, out of the North wind: 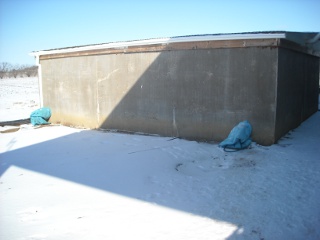 For our camper, we have a small propane heater, which, for times like this, just sort of takes the edge off, although we often saw our breath; and at night, we’d basically wear our outdoor clothes to bed under the comforters, which actually was quite warm. And William, our cat, spent most of his time inside with us. 🙂

One of the things we’ve learned to do for situations like this: the condensation in the camper eventually freezes the door latch, and so we spray it with cooking oil spray (I assume just about any oil would work), and that has helped keep the latch from sticking.

Here are some other pictures of the scene: 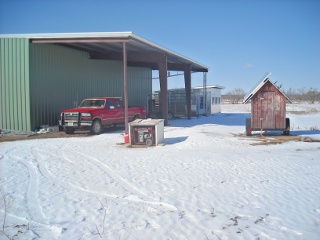 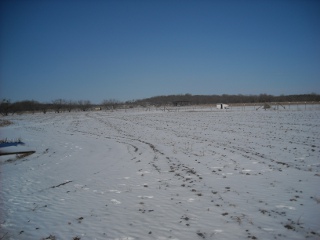 Well, that about sums it up. All in all, it was a rough one, and we worked pretty much non-stop each of the cold days, and not all of the community folk’s animals made it. However, we are very grateful though to the Lord for His continued provisions, and His many continued graces and mercies, and for His help through this difficult time of weather.