We just wanted to give a little update on some of the animals we’ve shown in the past, so you can see how they’re doing now.

You might remember our orphaned piglet (see the last video of that blog post) from a little over nine weeks ago.

Here she is with Sue a few weeks ago: 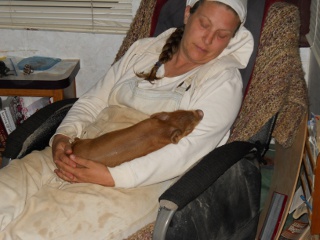 Well, by God’s continued graces, she’s past the piglet stage, and has grown into just plain pig stage. We had kept her in the camper until she was getting restless in there; and since our pig pen area was being used by her sire, who had been put with some of the Bunker female pigs to “service” them, with her being as small as she was, we decided to basically start swapping her and the dogs, day and night, between the dog’s outside and inside-the-barn kennels.

Here’s the transfer we do in the morning (she seems to get heavier each day!) Sometimes I can play with her shoulders, and she’ll play back. And then it’s hard to resist patting her little bum 🙂 :

With some of the temperatures reaching well over 100 degrees outside lately, I dug her a mud pit in the barn: 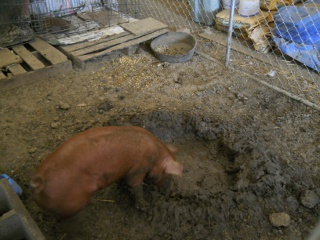 We thank the Lord for granting that Pebbles make it this long, especially being an orphan.

Here’s Pebble’s sire, Fred (in the middle, with his current “harem”): 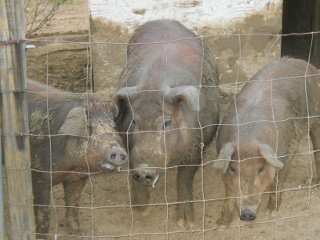 There had been two other females originally brought up, but with one he did his work pretty quickly; and the other one was going to go to the butcher, but looked pregnant, and ended up being so, with God granting the Bunkers several piglets.

Here is the original quintet “singing” for their supper! (They would do this each time when I would walk up with the food bucket.) Notice the choreography, and the aspiring soloist too!

And so, the plan is, when the Bunkers feel there has been enough time with these three together (or if Pebbles outgrows the dog kennel and starts breaking things), they’ll come get their females; and Fred will take his final ride to the “processor.” He’s going to be quite the haul, Lord willing!

Once he’s gone, we plan to move Pebbles up to the pig pen so she can start her life up there.

God has shown His graces and mercies in granting the health and safety of these provisions, and we are again most thankful to Him.