Gigi the Goose Gets Augie the Gander

After our gander, Gary, died last year, his mate, Gigi the goose, was obviously all alone. Since then, she has basically spent her days up by the the goats, as from what we’ve seen, geese appear to be social animals; and we’ve hoped to find her a new gander, but haven’t been able to.

Some of the community folks gather here on Wednesday and Sunday evenings to listen to our teacher Mr. Bunker’s Internet radio show. After it was over one night, Mr. Woods was looking on Craigslist, and came across a “geese for sale” ad. I asked him to forward it on to me, which he did; and within a few days I followed up with the person who was selling the geese. He indeed had a male for sale — a couple of them; and so, we said we’d like to go ahead and get one. The day we went, he rounded one up; and then we picked him up.

We were trying to think of names; and because “Gigi” is French-sounding, we started looking at possible male French names. At one point, I was reading them aloud, and got to “Gustav,” and Mr. Plumley said, “Ha! Goose-tav!” I hadn’t thought of it that way, until he said something, but thought that would be a fun approach. Well, after several gyrations of similar ideas, and trying to find the right name, we decided to go with a starting point of “Au-goose-tine” (given it’s sort of related to us in our Reformed beliefs), which we are just shortening to Augie. And so, please meet Augie the Gander! He’s apparently a Chinese-breed goose: 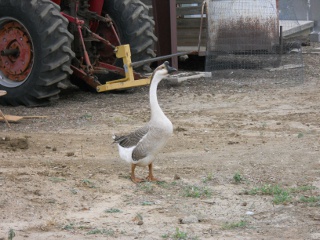 And here is a video of him and Gigi’s introduction:

Gigi has dropped a clutch of eggs each Spring we have had her. During the Spring and Summer before he died, Gary and Gigi did try to mate, but weren’t really successful; and we figured a water-pond-type environment might be necessary for them to mate properly. In the following picture, you’ll see the little pool; and now with Augie, we hope they’ll be more successful; and perhaps Gigi will be able to hatch out some goslings, if the Lord wills.

We’re thankful for the opportunity for Gigi to have a new mate, and we hope the geese will be a beneficial, and even fun, addition to the homestead.