After last year’s drought and not being able to plant a garden (other than the tomatoes, which I mentioned in our Mercy in the Drought blog post), with rains we received over the winter time, we were grateful to the Lord for granting us this year to be able to do so!

We have prepared several garden and orchard areas with the mulching for long-term composting, and since those aren’t immediately ready, I figured we would just continue to use the raised beds we have. Several are still in garlic for this year; but for the other ones, I bought compost, and just dumped and spread it on top of the soil that was already there, thinking I could plant directly into the compost (assuming compost in general was a good thing to plant in). What I failed to think through was that compost you can plant into is already composted, whereas the stuff I bought I believe still needed to compost. After planting in them, only the squash and zucchini, and a few okra sprouted — the beans and carrots didn’t (but for a few exceptions; I’m wondering if the squash/zucchini sprouted because of the seeds having hard-shells). I should have done my research *before* I planted. 🙂 And so, I decided to go in and mix the compost with the soil underneath a couple of the beds and replant the green beans and carrots.

Also, in watering the beds that have only compost on top, just running even quite a bit of water on them didn’t seem to cause the compost to get wet at all. I couldn’t understand what was going on — I mean, the water had to be going somewhere. Well, it appeared that if I just let the water run and soak in underneath, on the next day or two, the compost was indeed moist all through; and so, I figured that the water was just soaking upward after watering.

And here are the beds planted. I also planted already-growing tomato plants in the far, not-raised bed, in just the compost, although fairly deeply; and they are still living, but don’t seem to be growing much; so we will have to see how they turn out: 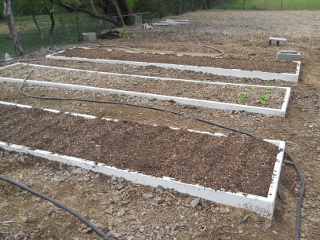 And here is the okra area in the far side of one of the garlic beds: 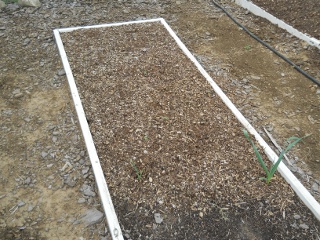 Interestingly, in one of the garlic beds, we had planted onions several years ago; and after last year’s drought, there wasn’t much left of them (some of them had continued to grow each of the previous years). Well, I thought I had cleared them all out for the garlic, but apparently not. We basically just use the green tops as I don’t believe bulbs are really growing, but I suppose we will see how that goes too, Lord willing: 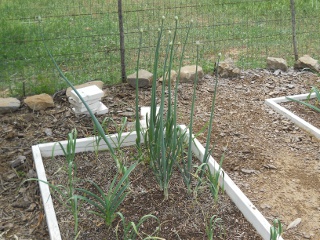 Also interestingly, although I didn’t plant garlic in them this year, apparently there was some remnant cloves from last year, still in them. Here is the carrot bed with a couple of garlic plants growing: 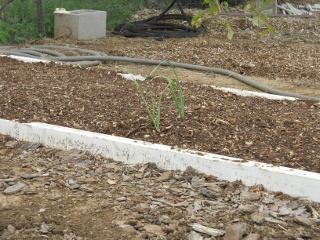 We are truly thankful to God for the opportunity to plant and water this year, and we pray He might grant provisions from the garden, in accordance with His will.