Twice a year we gather as a community for a week to work on projects for our teacher, Mr. Bunker, and his family; and to provide an opportunity for guests to come by and help out and meet the folks here, etc.

The men had two projects they were working on throughout the week: building a cabin for Mr. Contra and Miss Tracy, who are betrothed; and doing finishing work on the inside of Mr. Bunker’s cottage.

For the Contra cabin, we started on Friday with a concrete slab pour. This was the group’s first real concrete pour on the land, and the guys did a lot of study and prep work in getting things ready. Here is the area formed with the rebar: 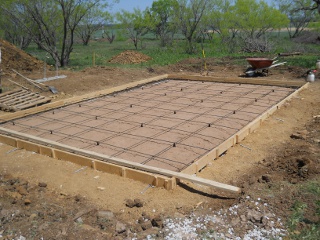 And here begins the concrete pour: 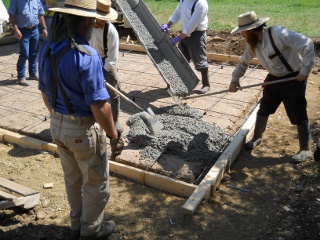 And more of the pouring and after “screeding” (or spreading) it out with the long 2×4 that spanned the whole width: 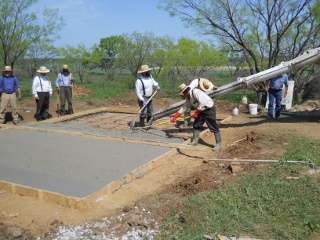 Here the concrete is tamped lightly by what they call a “jitterbug”, and a “bull float” is used to smooth out the concrete surface: 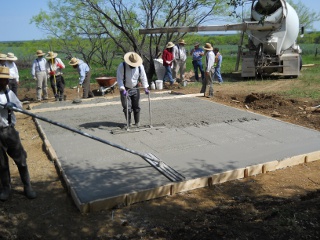 And then it was edged so the edges are rounded, to help keep them from chipping. One fellow also went around the sides with a hammer, lightly tapping the forms to help keep the concrete from “honeycombing”: 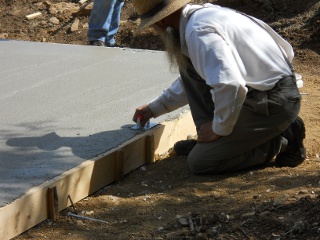 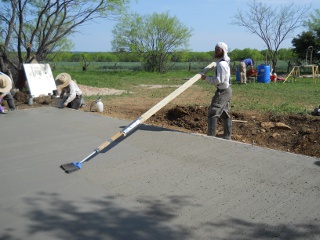 And finally, the betrothed couple thought they’d mark a memory of the event: 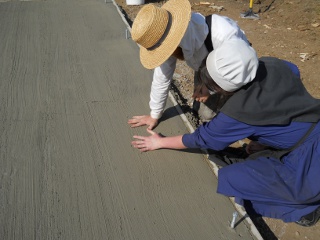 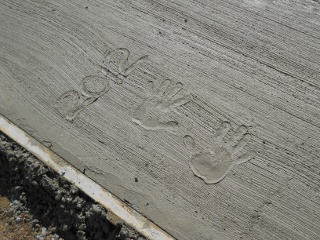 On Friday evenings, Mr. Bunker is going through in an in-depth way the last chapters he included in his book “Modern Religious Idols,” which was an article series he wrote called “What is the Gospel?”: 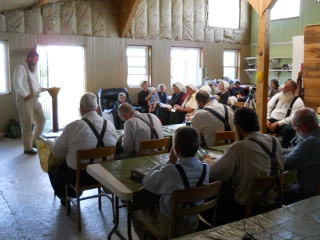 Ranchfest times are often planned around the Passover time, which we observe as a teaching method for the children (and as a memorial for the adults) of the types and shadows used in the Passover feast representing Christ.

Here is the Passover “ceremony” time: 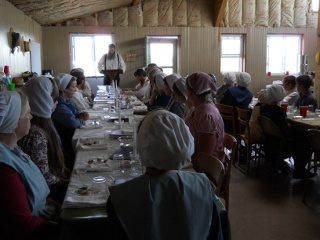 And the seder plate, with each food element representing some part of the event of the Passover time of the Hebrew people in and leaving Egypt: 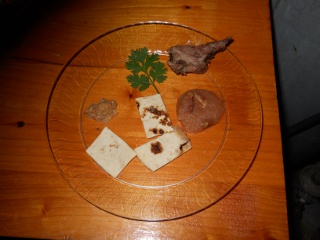 We also sang Psalms 113-118 from our psalters, and here is a video of a few of those psalms being sung:

As I mentioned, the other project was working on the internals of Mr. Bunker’s cottage, putting up insulation and siding.

And here is some of the completed work: 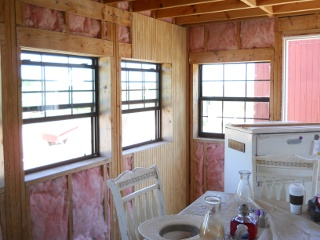 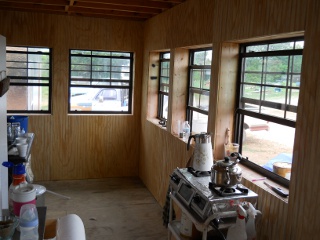 Here are the men cutting the siding: 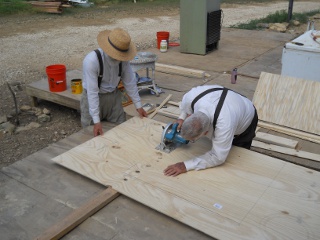 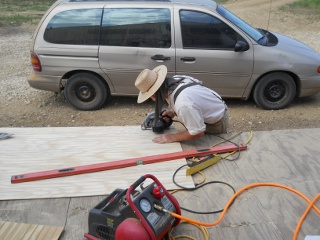 And here is some staining work of the siding being done: 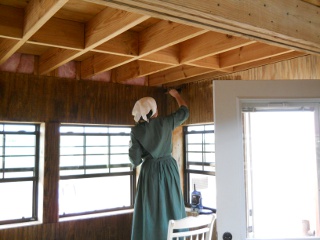 Once the concrete slab was completed, it was time to build and raise the walls. Here’s the cabin with two of the walls raised: 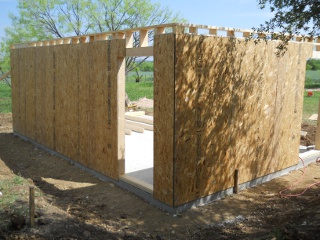 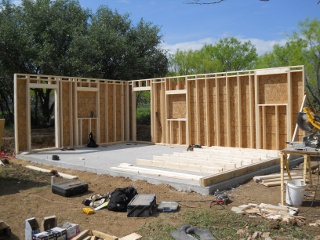 And then with all four walls in place: 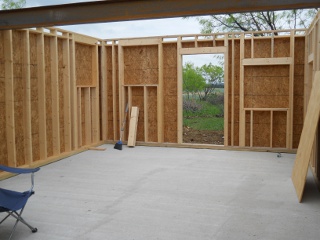 Apparently, the plan is to have a second story; and so, they are using a 10 inch I-beam spanning the width, which will be the support for the upper level floor: 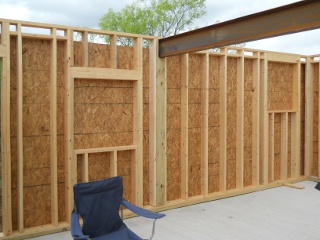 Back at the cottage, after the siding was in place and stained or painted, the window sills and trim were cut, installed and painted with a clear wood protector: 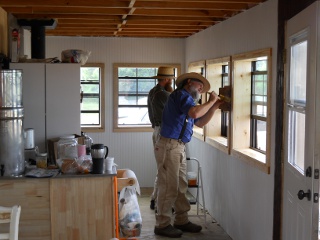 And here are a couple of final pictures of the cottage work for the week: 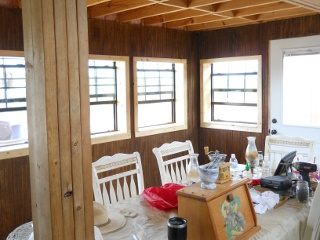 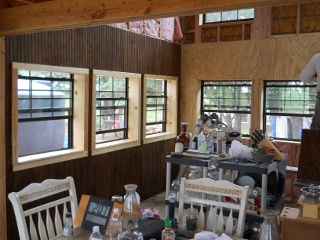 Besides all of the group meal preparations the ladies did for the week, they also had other projects, which this Ranchfest included sewing for the Bunkers and snapping mesquite pods, which they use for their mesquite coffee.

The main sewing project was for curtains for the cottage, although there was some clothing-making worked on. Here are some sewing preparations being done for some clothing: 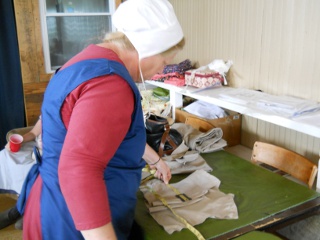 And here, even the younger ones helped: 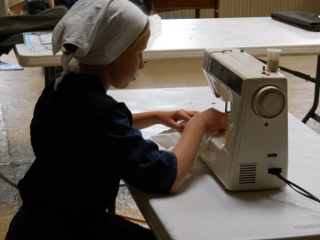 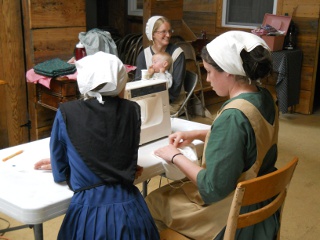 Seems to be a fun time too! 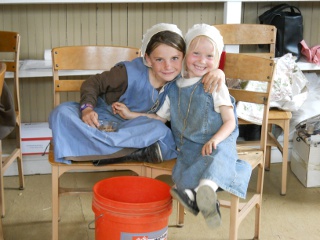 And here, Mrs. Sustaire is functioning as a seamstress and a lounge chair:

And finally, here are some of the ladies and children helping with the mesquite pods: 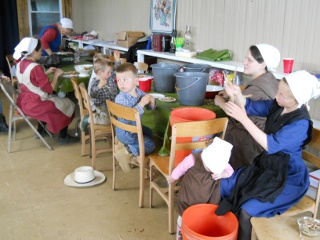 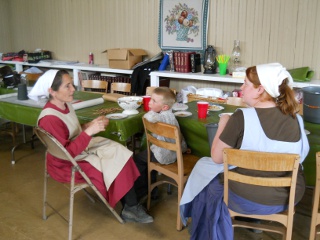 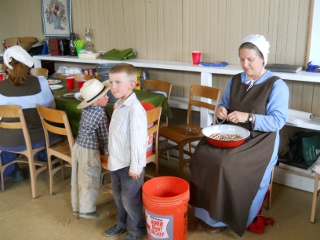 All in all, it was a very nice time of fellowship, community and work. It’s tiring, but rewarding as well. We did have a few guest families that visited this year, and it was a pleasure to see them again or meet them, and we thank them for the help and work they provided.

We are grateful to the Lord for the opportunity to gather in His name to work together, and we’re thankful for the teacher He has granted us.