The Lord has shown extra graces this year in the amount of broody hens we’ve had. We almost can’t keep up, for which we’re very thankful!

And so, after the first round of chicks hatched for 2012, here is the next round from the hens that were in the “nurseries” mentioned in that previous blog post.

This was the next hen to hatch some out (this one wasn’t mentioned in that last blog post; these chicks are Group 2). We had her in our chicken pen area: 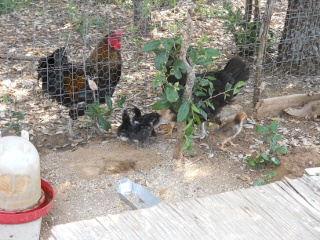 Going onto the “nursery,” this was the next hen to hatch her chicks (Group 3):

And then here’s the next one (Group 4). You can see the struggling one at the bottom — I didn’t think it was going to make it; and it looked like it had trouble walking; but by God’s graces it did, as you can see in the video below. I did add some “shackles” to its legs using duct tape, as it looked like it might have been spraddle-legged; I don’t know if it was for sure, but if it was, the shackles seemed to help (I got the shackles info from http://www.poultryhelp.com/spraddle.html, although our little chick didn’t look as bad as the example on that page). We have tried the shackles before on a very young rooster, and by God’s granting the shackles definitely helped: 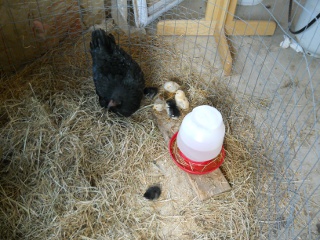 And then here’s the hen and her chicks that are in the piano room (Group 5). This one also had a chick that really looked like it wasn’t going to make it — it had trouble standing, looked very sleepy, and couldn’t really get around very much. I actually put the spraddle-leg shackles on it too, but it was having so much trouble dealing with them (it was just falling over with its talons pointed backward) that I removed them. I thought for sure it wasn’t going to make it; but, again by God’s granting, it did, and it seems to be getting around pretty well now: 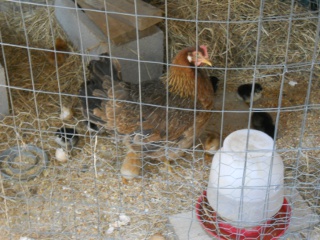 Finally, there were a couple of broody hens in our main chicken tractor that we just didn’t have a place for in any of our other buildings — they were both in the same nest; and so, we waited until they were supposed to hatch them, and they did hatch two before we could move them. Then, having removed the mother hen from Group 1 from the previous chick-hatching blog post, we also removed the mother hen from Group 2 that is in the chicken pen area, shuttled Group 1 to the chicken pen, and moved one of the mother hens (we just picked one), the chicks, and the rest of their eggs to the mini-tractor; and since, she has hatched out two more (Group 6): 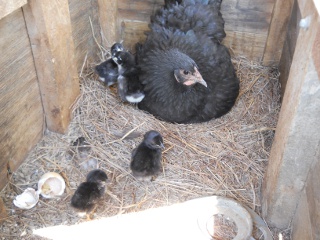 And here’s a video about them all:

Whew! But, apparently we aren’t done yet, Lord willing — there are now even more broody hens; and so, we plan to keep the shuttling-to-the-chicken-pen area/opening-up-a-nursery-area process going.

This one is scheduled to hatch out next. She decided to get broody in an empty garbage can (which she leaves every once in a while to get food and water), where chickens sometimes lay eggs: 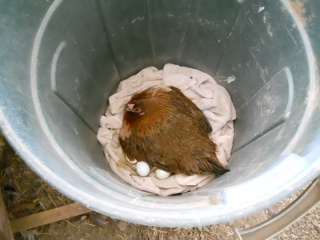 And here are the nests in the main chicken tractor. The game hen in the upper right is scheduled next after the garbage can hen, and then we just added eggs under the three Australorp hens on the bottom nests (the other hens I think were just “playing” broody at the time of the picture). I believe the hen in the bottom right nest is one of the ones that helped hatch out Group 6: 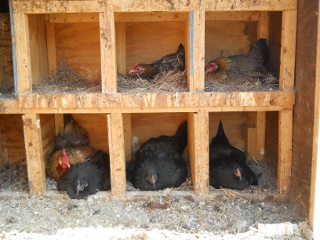 And so, once again, we are very thankful to God for this “problem” of many broody hens; and we thank Him for these many safe hatchings.