Since our last update on our turnips and wheat, the turnips basically dried out; but we are grateful to the Lord for what He granted in them in being able to feed our pigs with them.

But the wheat continued on its process. Here is what the wheat field looked like back in April. You can see how high it had grown in the second picture: 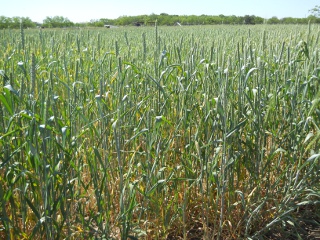 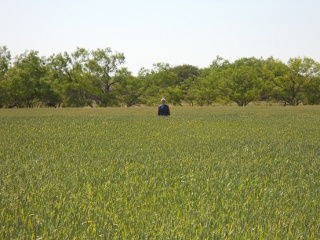 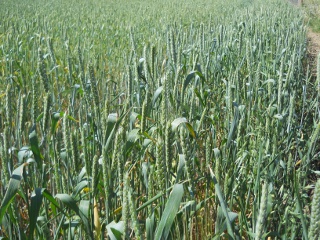 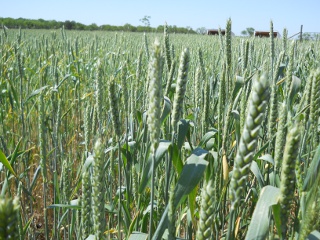 Fast forward a little over a month, and here is what it looked like. A beautiful gift from God! 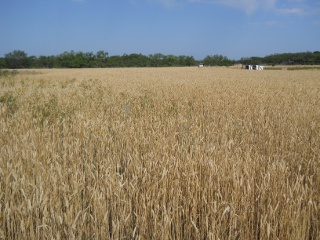 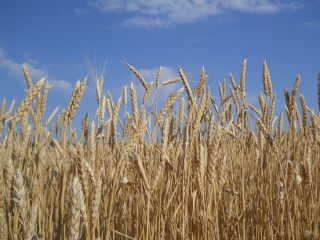 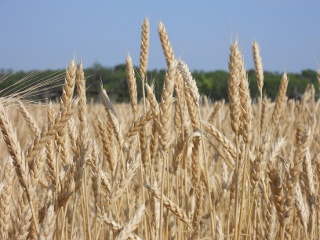 And then it was time! The harvest! This is something we had been looking forward to basically since we moved here — being able to harvest a crop. There is also much to learn spiritually from the wheat harvest, the wheat being the saints of God.

First was to cut it and tie it into sheaves. I tried using a scythe for reaping (God harvesting the souls of His people); but it ended up leaving the wheat on the ground in somewhat of a chaotic fashion (which could just have been a lack of technique); and we found that having all of the heads together in one place is better for the threshing process; and so Sue used a sickle, which worked well. We tied them using weeds or twine. The whole time out there are got “Bringing in the Sheaves” stuck in my head: 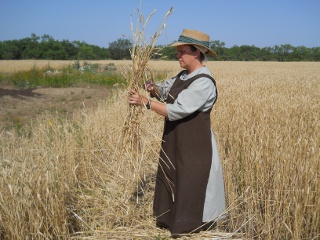 And then stacked them into stooks to dry (God gathering His saints together): 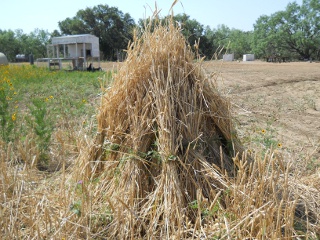 Once ready, it was time to begin the threshing process (God breaking down the carnal, selfish man of His chosen with trials and chastisements). We laid out a tarp, and borrowed some flails from one of the folks here. He attached some chains on the end of closet dowels — we thought the loose, heavier chains might do well with the flailing: 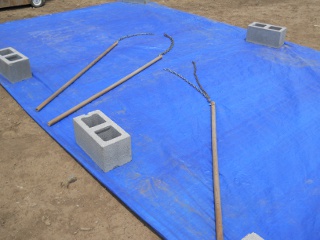 And here is Sue and myself flailing away. It’s something of a violent process (sometimes God needs to be a little “violent” in the breaking down of our pride): 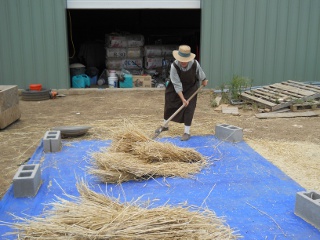 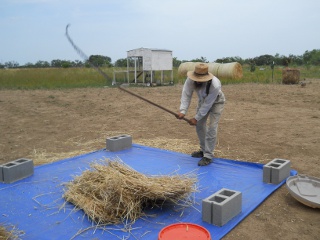 And then it was time to winnow the wheat, separating the chaff from the wheat berries (God further refining the souls of His children). We used a garbage can lid, which didn’t work too badly: 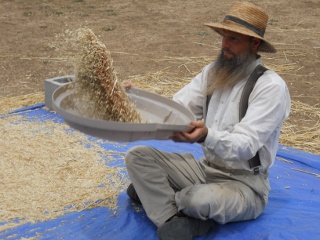 After several hours of work, here is the finished product — the mostly cleaned wheat berries (God’s gathered in, sanctified people): 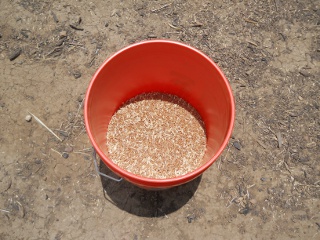 We were thankful to be able to go through the process of hand-harvesting and processing the wheat.

It happened though that a fellow from town we know had an old grain combine that he wanted us to have to use, if we wanted, and he had a backup one for spare parts. After the Bunkers got done using it, and graciously going through all of the headaches and replacing of parts needed to finish their fields, it was our turn to use.

The “combine” is a machine that does all of the processing we described above all at one time. Of course, it’s much faster, but you also have to maintain it (which causes dependence on the world), you don’t get the experience needed to learn how to harvest wheat by hand should the mechanized methods be no longer available one day, you don’t think about the spiritual aspects of the harvesting process because you’re not intimately involved, and you don’t get the benefits (spiritual and temporal) of performing work in God’s way, all of which are why we wanted to process at least some of the wheat by hand.

Still, I wanted to be able to make sure to get all of the wheat harvested and stored before we lost the crop from being in the field too long; and so I decided we would use the combine on the rest of the field. And here it is a-harvesting: 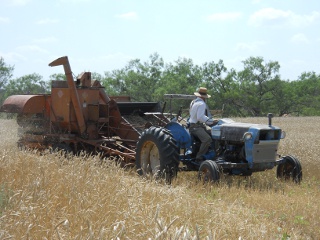 And a completed row: 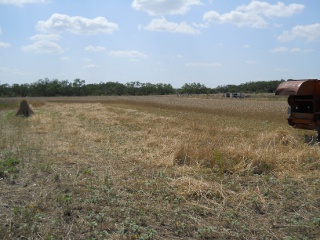 You can see the difference in amounts between the picture above of the hand-harvested in the bucket vs. what the combine collected after just a couple of hours. I can understand the temptation of the carnal man that caused him to desire and then over time find and eventually implement, through industrialism, what appeared to be easier ways to do things, and how easily it can be to get sucked into the industrial trap, which actually leads to slavery — you become dependent on the industrial machine (as a system), and then MUST do things the worldly way to survive). This is something we try to remember and keep in perspective, even if we use something like a combine for now: 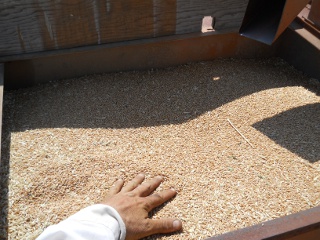 With the combine’s grain bin full, with the help of some of the men, we unloaded it into sacks for storage: 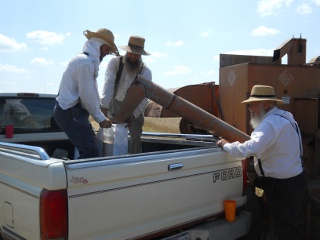 And used rebar ties to tie them off: 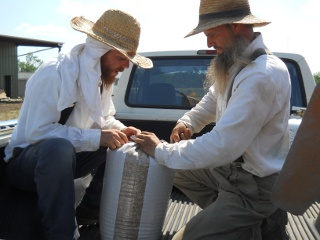 Here is the first haul from that first bin: 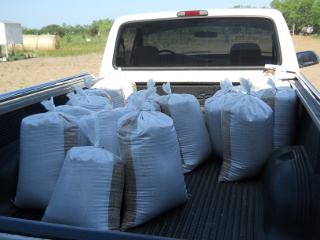 And here is the final stack of wheat sacks: 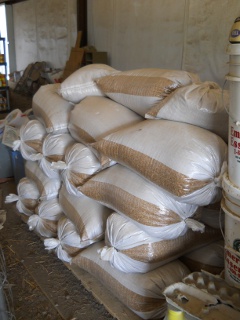 If you’ve never seen a combine in action, it is pretty amazing the amount of “work” it does, when it’s working and not broken down:

We are so very thankful to the Lord for His granting of a wheat harvest — our first real crop, besides the turnips this year as well. We thank Him for the lessons He teaches us in His word and through work, and we pray He leads us into work that is worship unto him. We pray He thresh and winnow us in purity, and that He help us through that when He does; and we pray we will be presented to His Son one day, a “cleaned” and holy bride.