A Mulching We Will Go – Update I

I have come to believe that about the only way to semi-win the temporal war of the weeds around here is to mulch them. Cutting them with a lawn mower endlessly just isn’t a long-term solution. Applying the mulch under the north lean-to of our barn has worked really well, and the mulch we get from the landfill has a lot of fine compost dust, which seems to really kill plant-type material (I have found that you have to be careful not to get it on leaves of plants you want to keep, because it seems to cause them to wither and even die); and so I am hoping, Lord willing, to mulch just about everywhere around buildings, the garden areas, etc. where I would like to control the weeds.

When we started adding heavy layers of mulch to the gardens, I had made a mulch carrier for our truck. With the way I originally built it, I had to heave all of the mulch over the sides. Someone asked why I didn’t have a removable back for it. Wow, brilliant! And so, I changed the carrier to have that.

Here it is with the removable back in place. I used latches that don’t spin and key hooks to keep them latched, which was a little cheaper way to go instead of using twisting latches: 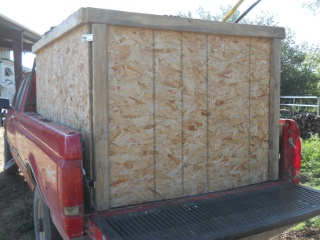 Here is the back door swung open;

And then completely removed. It works pretty well, and is less messy on my person, especially when it’s windy: 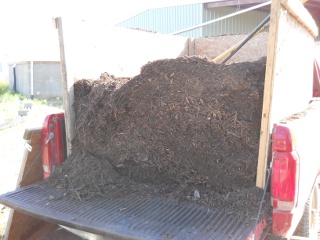 With the new carrier ready, for this round, I thought I’d continue north of the barn, filling in the whole area from where we left off last time to the water berm about 20 feet away. Here it is before the mulch, before being mowed: 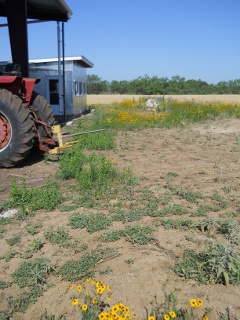 And here is the same area, two and a half months later, after laying down about a three to four inch layer. I picked the weeds one time, and it’s holding pretty well. It has to be weeded, but the weeds often come out fairly easily, and it seems over time, fewer and fewer weeds appear:

Again, this whole mulching idea seems to work pretty well. We’re thankful to the Lord for this idea and the resources to implement it, and we pray God by His Spirit keep the gardens of our hearts weed-free.