Moses’ Song of the Sea

3 And they sing the song of Moses the servant of God, and the song of the Lamb, saying, Great and marvellous are thy works, Lord God Almighty; just and true are thy ways, thou King of saints.

4 Who shall not fear thee, O Lord, and glorify thy name? for thou only art holy: for all nations shall come and worship before thee; for thy judgments are made manifest.

Some time ago, our teacher Mr. Bunker mentioned these verses in Revelation 15 that talk about the saints singing the “song of Moses” in heaven, and wondered if someone had already put together words and music for that so that we as a group could begin to sing it now. In looking it up, I discovered a song of Moses sung after the Israelites crossed the Red Sea, which is in Exodus 15:1-19; and although there is another “song of Moses” in Deuteronomy 32, Puritan commentators John Gill and Matthew Henry believe the Revelation reference is to the Exodus song. Back then in trying to find a singing version of the song on the Web, we weren’t able to really find anything. Well, I have some musical background, and have attempted in the past to compose lyrical songs; and every once in a while — which has turned out to be about once a decade — I am able to put one together; and so, I thought I would try my hand at this, and see what might come of it.

I started with the words. The first line of the song, which is “I will sing unto the Lord, for he hath triumphed gloriously” sort of seemed to have natural musical meter — and with a couple of changes fell nicely into what’s called common meter, which has 8 syllables followed by 6 (like “Amazing Grace”) — and that set the lyrical rhythm for the song. With my first go at the words, I didn’t really put them together in proper meter; and so, I went back over them, and was able to finally work them into metrical shape. This was all over several months.

After the lyrics were basically done and Mr. Bunker approved of the “translation” from the actual scriptures to my lyrical version, it was time to see if I could come up with the tune. Over months again, I tried several times, but nothing really came out right, or I lost interest in pursing the version that I had started.

Then one night, after midnight I believe, I was having trouble sleeping, and I starting thinking about the first line of the song, and soon a melody came to me, which worked nicely with the song’s meter, and didn’t sound too badly to me. I continued on through the rest of the first verse, trying to continue with related melody lines (ones that flowed melodically from one phrase to the next). With the length of the song, I was hoping to come up with a “quadruple” common meter version (“Amazing Grace” is single common meter), so the melody wouldn’t be repeated many times trying to get through all of the lyrics. Finally, I was able to work through a quadruple version of the melody, which to me sounded like it might work…I was only hoping I could remember it the next morning! I generally figure though that if it’s a melody worth remembering, it’ll be remembered…

The next morning, I thought about it, but was having trouble remembering how it started. Shortly though, I did remember it, and then figured I’d better write it down. Once on paper, I was very thankful to the Lord for granting the tune, and thankful to now finally have a melody that sounded like it just might work and maybe even sound nicely. At one point, I actually teared up, happy and thankful.

Once the melody was complete, it was just a matter of putting a chord progression to it, and then voicing the parts, since this would be in the form of a typical hymn.

I sat down at the piano, worked out the chord progression and then the voicing; and here is how it came out! 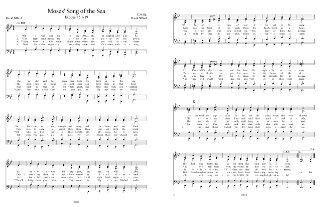 Here is a PDF version:
Moses’ Song of the Sea PDF

And here is an audio piano version of the parts:

And a vocal version:

We’re just starting to learn it here as a group, and so hopefully at some point, I’ll be able to have a recording of us all singing it, in parts, if the Lord wills.

I am thankful to the Lord for granting this, and pray He uses it for His glory and the benefit of His Church.