When we first started milking our goats, some folks from town graciously gave us a milking stand, and it has served us very well. It has started to really show the effects of time and wear and many repairs, and because when we breed our goats during the winter, we split them into two generations, and so Sue didn’t have to walk goats from one pen to another just for milking, I thought I’d put together another one for her, using the original as a spec.

Thankfully, I was able to scrounge up all of the wood necessary for it, which was nice.

I started with the base, which is basically 2 feet by 4 feet. It might be interesting to make it 3 inches less wide so the cross pieces would be 2 feet instead of 27 inches, but we have quite a few leftover pieces of OSB that were cut out from the 2 foot by 4 foot pony wall windows of the house, so one of those is what I used. The 11 inch legs on the original were something of a weak point, so I tried to bolster them by using 2×4 instead of 2×2, and used screws on both sides (which, to allow for easier replacement, on the long side I did from the inside so the eventually uprights wouldn’t be attached over/covering the leg screws) and the top: 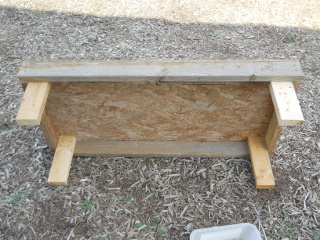 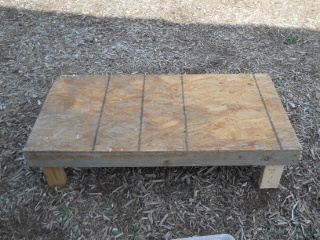 I then cut out basically all of the parts I would need: 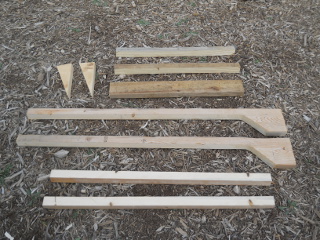 The uprights I used an 8 foot 2×6 cut in half to 4 feet, and then ripped at about 1 1/2 inches. Another weak point in the original design was where these uprights attach to the base, so I thought I would shape them at the bottom to hopefully be more sturdy and have more material to which to attach to the base. (UPDATE: please see our goat milking stand update blog post for a continuing problem with this and an enhancement I added.) Note that for many of the screws I drilled pilot holes, especially when dealing with the thinner pieces or older wood: 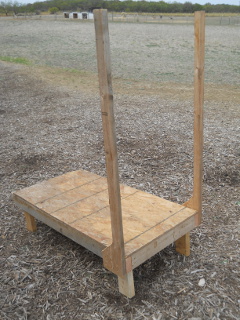 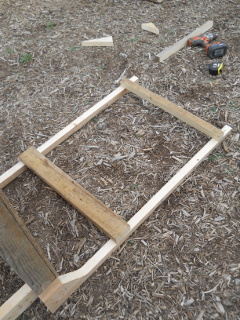 And the neck holders, one obviously being only attached at the bottom cross piece (which is the top cross piece because the stand is upside down). These were 3 feet long, ripped from a piece of one of the pieces cut out of the 2×6, a little less than 1 1/2 inches wide so that the moving one would slide nicely between two cross pieces without binding or being too loose. Their outer edges are 9 inches from the outside edge of the cross piece: 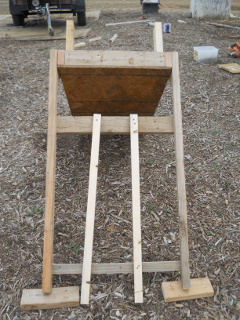 And then the last top cross piece and the shelf holders, which were from a 10 inch 2×4 cut diagonally. Those I put the top level with the top of the bottom 2×4 cross piece: 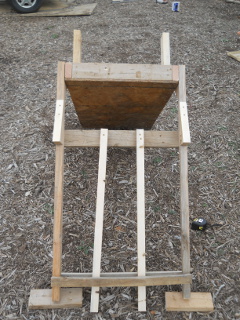 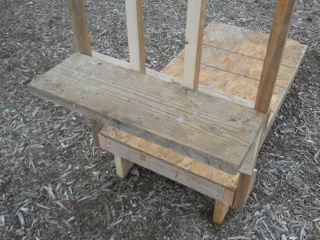 And here are some extra screws I put in to hopefully more securely attach the shelf:

And here it is! 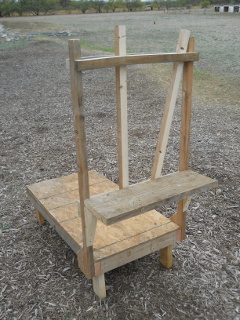 We had some u-shaped brackets laying around, which just happened to fit perfectly over the two neck holder pieces, and so we’re using that to hold the neck pieces closed when the goat’s neck is in it: 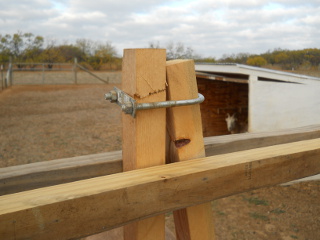 And here the milking stand is in action! We hope to find and start using something more sturdy for the feed holder instead of plastic buckets, like an aluminum pot or the like from a thrift store — something to withstand the weather and the goats a little better 🙂 : 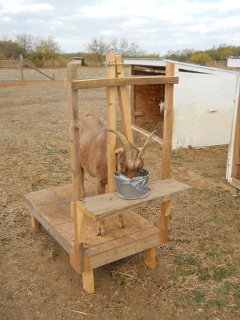 We’re grateful to the Lord for the original stand from those generous town folks, for the left-over wood to be able to use for this, and for the opportunity to have it completed. We are continually thankful for God’s provisions generally and for the healthy goat milk.